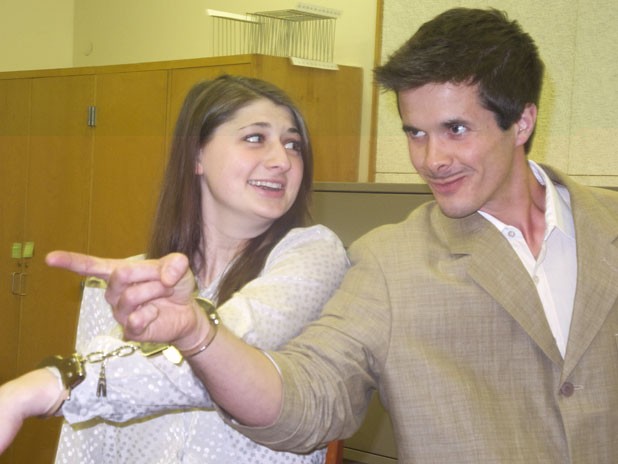 From Greek myth to Hitchcock: That’s the trajectory of Vermont Stage Company’s “Bake Off” so far. Of course, it’s only happened once before. The innovative theatrical presentation in which a play is divided into three sections — each with its own director and cast — is about to dive headlong into its second annual production: The 39 Steps. The fast-paced mystery/thriller/rom com is a far cry from last year’s Eurydice, a Sarah Ruhl-penned take on the Orpheus myth.

Cristina Alicea, producing artistic director of VSC, says she chose The 39 Steps this year because “it’s a ridiculously fun comedy — I wanted something light and perfect for summer. And it also poses some serious challenges for the directors to overcome.”

Such as zero budget for props. The directors and actors have to fend for themselves in recreating, say, a train and a plane crash. Even a door.

In essence, the story is this: London resident Richard Hannay tries to help a female spy, Annabella Smith, who claims to have uncovered a plot to steal British military secrets, masterminded by a shadowy group called the 39 Steps. The unfortunate Annabella is murdered, but not before she passes vague instructions to Richard to bring the information to a mysterious person in Scotland. As Richard flees, he learns he’s been accused of Annabella’s murder and is the target of a manhunt. The plot thickens when he reaches the man he thinks is Annabella’s contact and … well, never mind, we mustn’t give the whole story away. Suffice it to say there is madcap mayhem, a love interest named Pamela, and a great deal of sleuthing and escaping and crashing.

Steps began as a book, in 1915, which legendary British director Alfred Hitchcock adapted for film in 1935. Two years later, it was made into a radio play. Eventually, in 2007, Steps went onstage, with Patrick Barlow’s adaptation, in London and New York. The Broadway production was full of “the typical glitz and glam,” says Alicea. “The original almost felt like a magic show with low-tech and high-tech.”

But Broadway “has the resources to make this work,” Alicea continues. Her thinking was, “What if we take this big show that has all this action, and [the directors] get nothing?” she says. “For me, this is what a director goes through — most don’t have the budget of Broadway, so there are things to overcome. I handed it to them and said, ‘Figure out how to solve this problem.’”

In other words, expect almost no tech from the VSC’s tripartite staging, but a ton of creativity. And therein lies even more fun, as much for the directors and actors as for the audience. Adding to the hilarity — and the challenge — is the fact that two of the four actors in each section, whom the directors call “clowns,” play upward of 150 parts, at times juggling several simultaneously. Just imagine taking on a role that requires you to play men, women, children and the occasional inanimate object. Oh, and believably pull off a German, Scottish and English accent. Sounds exhausting and exhilarating in equal measures.

The leading male role, of course, is Richard Hannay. The leading lady plays Annabella Smith and, in a nondivided production, also Pamela.

This year’s directors are Sarah Carleton, Dylan Friedman and Cathy Hurst, who took the first, middle and last sections, respectively — reportedly with no disagreement. At auditions for the roles in Steps, though, “All three really wanted the same leading man and leading woman,” Alicea says, “so we had to figure out who would be best for each section of the play. Cathy got her first choice on leading roles because of the romance.”

Hurst is a seasoned director, a faculty member of the St. Michael’s College theater department. At the college, she works primarily with student thespians, but she’s also the principal director of an opera company in Los Angeles. Hurst, who is new to VSC, says she was interested in the resolution of the push-pull chemistry between Richard and Pamela. “I love directing that sort of thing,” she says. “I like the humor of it, and I’m a romantic at heart.”

In the lovers’ roles Hurst has cast Justin Rowe and Kit Rivers (both of whom happen to be standup comics). Sebastian Ryder and John Van Luling are her “clowns.”

At the opposite end of The 39 Steps — the beginning — Carleton is “loving the fact that I have to make clear the story,” she says. “My responsibility is the concept of the piece and the motivation.”

Carleton, a longtime faculty member in the University of Vermont theater department and a veteran actor and director, says she saw the play on Broadway and loved it. She’s enthused about the opportunity to face Steps sans bells and whistles. “You have to convey everything with facial expressions and gestures,” Carleton says. “It’s exciting because it’s fast and we’re pulling things together ourselves. I like taking risks.” Taking them with her are leading lady and man Alice Corvo and Jason P. Lorber, and her clowns, Tim Wagoner and Ryan Howland.

Carleton will pass the figurative ball to a former student, recent UVM grad Friedman. He assisted Alicea when she directed a section of last year’s Bake Off and has worked a number of behind-the-scenes jobs at VSC since, but Steps is his postcollege directorial debut. Friedman, 23, says he doesn’t really think about the age difference between him and his fellow directors, but he’s respectful of their long experience and seems thrilled to be working with them.

Well, with them mostly in devising segues from one section to the next. (A full rehearsal with all three sections doesn’t take place until this Thursday.) At the end of section one, Hannay “falls off a bridge into my section,” Friedman says. Much of the action ensues in the middle third, and he gets to devise inventive escape scenes — which he’s reluctant to reveal. Joining Friedman in these escapades are leads Patrick Clow and Silvia Sword, and clowns Orion Lay-Sleeper and Jenny Gundy.

How will this all turn out? Audiences can find out next week. At least there’s one thing we can be sure of: Alfred Hitchcock will not be making a surreptitious appearance.

The Bake Off: "The 39 Steps," directed by Sarah Carleton, Dylan Friedman and Cathy Hurst, produced by Vermont Stage Company. Tuesday through Saturday, June 11 to 15, 7:30 p.m.; 2 p.m. matinee on Sunday, June 16, at the FlynnSpace in Burlington. vtstage.org