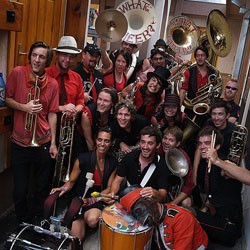 I adore Montpelier and wish I could spend more time there. It’s artsy and friendly. It has great restaurants. It has a disproportionate number of bookstores and a great record store. And, of course, it has the greatest bar in the world: Charlie O’s. It’s a lovable, quirky little city. The kind of place you root for. If it were a movie, it would be Rudy.

Not so long ago, Montpelier was an artistic and cultural hub that nearly rivaled its sister city to the north, Burlington. Obviously, due to the difference in size, they don’t compare on raw volume. But per capita, you could make a convincing argument that the capital city’s music scene was every bit as thriving as the Queen City’s, and was perhaps an even more close-knit community, to boot. The Lamb Abbey was booking bizarre underground shows. The Golden Dome Musicians’ Collective unified disparate parts of the scene under one banner. Every weekend, it seemed, there was something cool happening in Montpelier. And at the center of it all was the Langdon Street Café.

Not to beat a dead horse — and because we’ll be taking an in-depth look into the aftermath of LSC’s closing in a few weeks — but when the café shuttered its doors last spring, it was a critical blow to the arts and music scene in central Vermont. Not fatal, mind you, but it changed the city’s complexion. Most reports out of Montpelier over the last several months suggest that the scene is still recovering, and slowly at that.

While venues like the Black Door, Positive Pie 2, Charlie O’s and, recently, Bagitos Café, have helped take some of the sting out of that loss, the buzz that existed around music in Montpelier has quieted. But this weekend, Golden Dome music will bring some of her luster back.

The marquee event is the What Cheer? Brigade, headlining at the Vermont College of Fine Arts Gymnasium on Friday, May 4. You may remember one of the last big shows at the VCFA gym a few years back. It was some gypsy band called Gogol Bordello. I was there, and it was an all-around great night. Despite being a gym, it’s a nifty place to catch a high-energy show. It’s sort of like Memorial Auditorium in Burlington, only much more intimate. Oh, and the acoustics don’t totally suck, which is nice.

As for What Cheer? Brigade, they’re a 19-piece brass band from my native Providence, R.I., who refer to themselves as — this is awesome — “Luddite hardcore.” In other words, they don’t use any amplification. None. The band is loud enough on its own that it plays its bombastic mix of samba, hip-hop, N’awlins jazz and Balkan grooves au naturel. They were the sleeper hit of last year’s Newport Folk Festival — and by pulling an anti-Bob Dylan, no less.

There are a couple of solid postshow options, including the official after party at the Black Door with a metal band called Chalice — not to be confused with the Australian gothic metal band of the same name. You could also swing by Charlie O’s to catch one of my favorite new Burlington bands, alt-country torchbearers Shelly Shredder, and Seth Gallant’s (In Memory of Pluto, the Dirty Watts) twangy new project, Great Western. Speaking of GW, they’ve got some new tracks up on their Bandcamp page — greatwesternvt.bandcamp.com — and I approve.

Saturday, May 5, finds a perfect union of beer and … well, pretty much anything is a perfect union with beer. But in this case, the third annual Montbeerlier festival marries delicious brews from Three Penny Taproom with the elastic, genre-bending sounds of the Primate Fiasco outside on Langdon Street. Follow up that afternoon hootenanny with a Cinco de Mayo bash in the farmers market parking lot behind Julio’s Cantina.

Sunday is All Species Day, an annual neo-pagan festival that includes a parade, Maypole dancing and the Birth of the Goddess Pageant, which I imagine is like a beauty contest, except that the contestants are dressed up as their favorite animals. Neat.

But wait, there’s more! By Tuesday, May 8, you should have had ample time to shake the Montbeerlier hangover and/or find a way out of your animal costume. If so, might I suggest taking in the Devil Makes Three at the Positive Pie 2? The ragtime punk band has Vermont roots — two members grew up here, including front man Pete Bernhard — and has been making national waves with its latest record, Stomp and Smash: Live at the Mystic Theatre, released late last year.

Meanwhile, in Burlington, a collision of cosmic forces threatens to forever alter the landscape of Queen City debauchery when Mildred Moody’s Full Moon Masquerade meets Cinco de Mayo. Saturday, May 5, the Masquerade invades Nectar’s with an all-star lineup including local hip-hop heavyweights the Lynguistic Civilians and rebel-folk stalwarts 2nd Agenda, alongside monthly regulars Mildred Moody, and live body painting by the Human Canvas. May God have mercy on our souls.

The Masquerade isn’t the only place you can catch the Human Canvas this Saturday. Body-paint artist Kadina Dinash will do a special afternoon session at — I swear I’m not making this up — Moe’s Southwest Grill in Williston. Welcome to Moe’s, indeed.

This week at Nectar’s, Metal Monday goes international — and super geeky — with the Netherlands-based fantasy prog metal band Knight Area. Imagine Dio riffing on Dungeons & Dragons. With keytar. This might be the most awesomely dorky metal band I’ve heard of since Seven Kingdoms, who are — again, not making this up — a Florida power-metal band that bases all of its material on the A Song of Ice and Fire series by George R.R. Martin — better known as the books on which the HBO series Game of Thrones is based. No jape.

Feelin’ lucky, punks? This Saturday, May 5, riot grrrls Doll Fight! host the second annual Rock Lotto and Instrument Drive at the Monkey House in Winooski. Here’s the gist: Musicians toss their names into a hat that morning. Said names are pulled at random and said musicians are placed in a new band. Each new band has the day to practice for a showcase that evening. Rocking ensues and, likely, a train wreck or two. At the end of the night, all proceeds, including donated instruments, benefit Girls Rock Vermont, a day camp for aspiring young female rockers. Then, said young rockers grow up, start real bands and give back by rocking even harder. Everybody wins.

Grace Potter & the Nocturnals announced the dates for this year’s second annual Grand Point North Festival. The two-day bash, which last year featured a slew of great local bands alongside big-name national acts, will again take place at Burlington’s Waterfront Park, but this time not in conjunction with the Lake Champlain Maritime Festival. Rather, GPN (the fest) will happen on September 14 and 15 with some guys called the Avett Brothers co-headlining. The full lineup should be announced later this month. Tickets are on sale now at gpnfest.frontgatetickets.com.

Last but not least, Angioplasty Media announced the full lineup for its second annual Waking Windows festival, which is at various locations around Winooski Thursday, May 10, through Saturday, May 12. Unlike last year, the indie-rock fest is not going up against the Burlington Discover Jazz Festival, which means I can actually go to a WW show or two. Nifty. We’ll have a full rundown in next week’s column. In the meantime, check out angioplastymedia.net for schedule and ticket info.