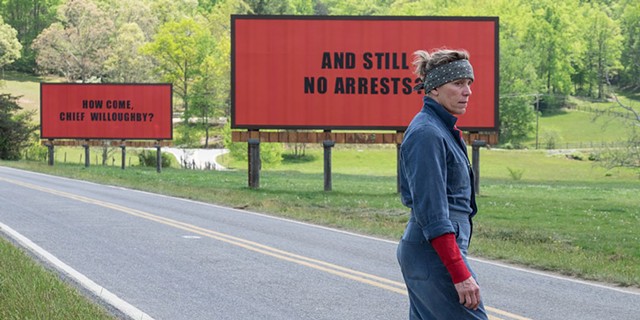 In the late 1990s, Martin McDonagh happened to glance out the window of a Greyhound zooming through the southern U.S. Raised in London, the playwright-filmmaker was curious about the country and wanted to examine it up close, so he traveled by bus or train when stateside.

What he saw that day was also curious: Alone in a field, one after another, stood a series of billboards. They didn't advertise a product, but asked a question: Why hadn't a particular case been solved?

Had he looked up from his book a second later, McDonagh might never have had that image seared into his consciousness. He'd never have found himself wondering what sort of person would rent space for such messages and what manner of offense could provoke such anger. He certainly wouldn't have answered those questions in a screenplay for a movie that stood an excellent chance of never getting made.

Which sounds preposterous, now that Three Billboards Outside Ebbing, Missouri has received some of the year's most glowing reviews, earned awards on the festival circuit and established its star as a Best Actress frontrunner. But it's the truth.

The role of Mildred Hayes was written for Frances McDormand, and for various reasons she initially wasn't inclined to play it. But her husband — Joel Coen — read the script and advised her she'd be nuts not to.

Luckily for audiences, McDormand listened. The result is the Oscar winner's finest work since Fargo. This time she doesn't play a police officer but a mother in mourning who goes to war with the local police.

Seven months have passed since Mildred's daughter was found raped and murdered, yet no arrest has been made. Her patience exhausted, she rents a series of roadside signs asking the chief of police why the case hasn't been solved. Chief Willoughby (Woody Harrelson) is understandably chagrined. Other officers, in particular a hothead racist named Dixon (Sam Rockwell), go ballistic.

Now, Hollywood knows us almost as well as Facebook does. It understood what sort of movie we'd expect after watching this film's trailer. The cool thing is, the movie McDonagh made couldn't be less like that picture. It's like nothing you're likely ever to have seen.

Mildred Hayes isn't Norma Rae bucking the cracker establishment, or Karen Silkwood exposing corporate corruption. She's a woman who's mad as hell, but she's also heartbroken, guilt-riddled and profoundly imperfect. For his part, Willoughby is anything but callous or incompetent. When he knocks on her door after seeing the billboards and tells her, "I'd do anything to catch the guy," he means every word. The character is a startling creation, one of the writer-director's most moving and memorable.

Even Dixon, familiar from a hundred films inhabited by stunted men who use the uniform as a disguise, isn't what we're conditioned to expect. And that is all I really should tell you about the story, except perhaps that few of the people we meet in Ebbing make it to the end credits. Some die. Some simply become different people.

To get the most from this movie, I suggest going in knowing as little as possible. Just be assured that the entire cast is in unforgettable form, and the writing is as barbed and brilliant as any you'll encounter this year. Rarely does a film defy both expectation and convention to such powerful, borderline-poetic effect. Take my word for it: You'll be glad you didn't miss it. And that McDonagh didn't miss that bus.

The original print version of this article was headlined "Three Billboards Outside Ebbing, Missouri"