Three Artsy Road Trips Within an Hour of Burlington 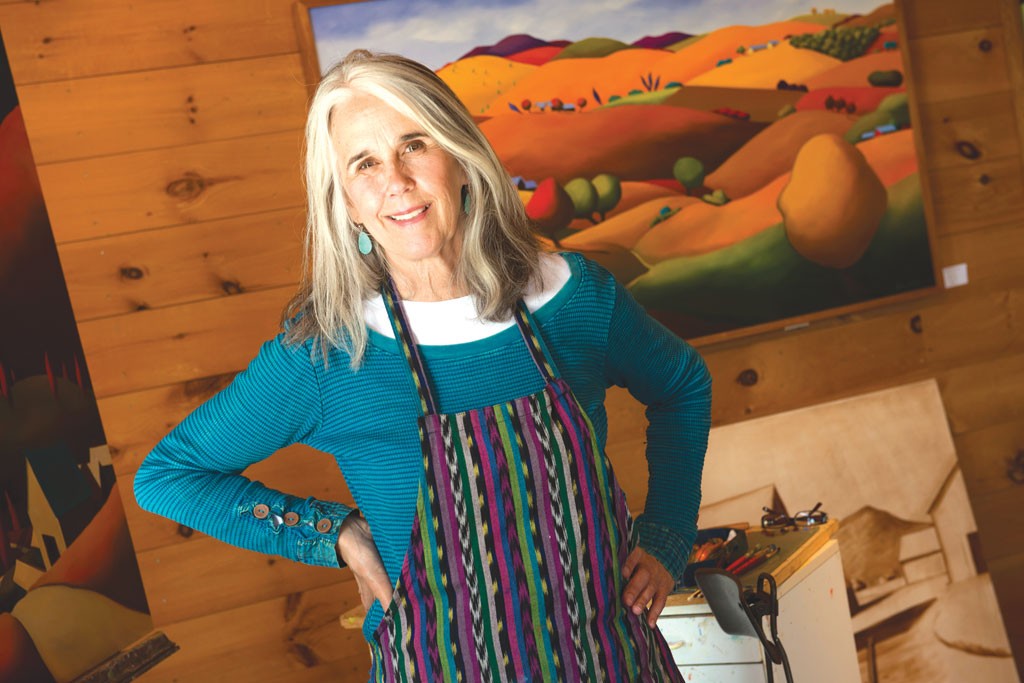 Burlington has long held a reputation as an arts destination. Its numerous venues, well-attended festivals and thriving performing-arts scene have landed it on AmericanStyle Magazine’s list of the Top 25 Small Cities for Art several years in a row. The city has even ranked as the sixth most artist-friendly alternative to New York City and Los Angeles, based on the cost of living, local flavor and value placed on the arts.

Happily, the arts extend far beyond Burlington and into the rest of the Green Mountain State. That fact is underscored every spring and fall, when the Vermont Crafts Council organizes an Open Studio Weekend, designed to showcase the visual arts and illuminate the creative process. Bright yellow signs along roadsides guide visitors to 250 artist studios across the state. You'll find everything from handcrafted rocking chairs in Starksboro to glassblowing in Johnson.

In advance of the Open Studio Weekend on May 23 and 24, we're highlighting three artist studios well worth the drive from Burlington, as well as attractions to explore along the way. 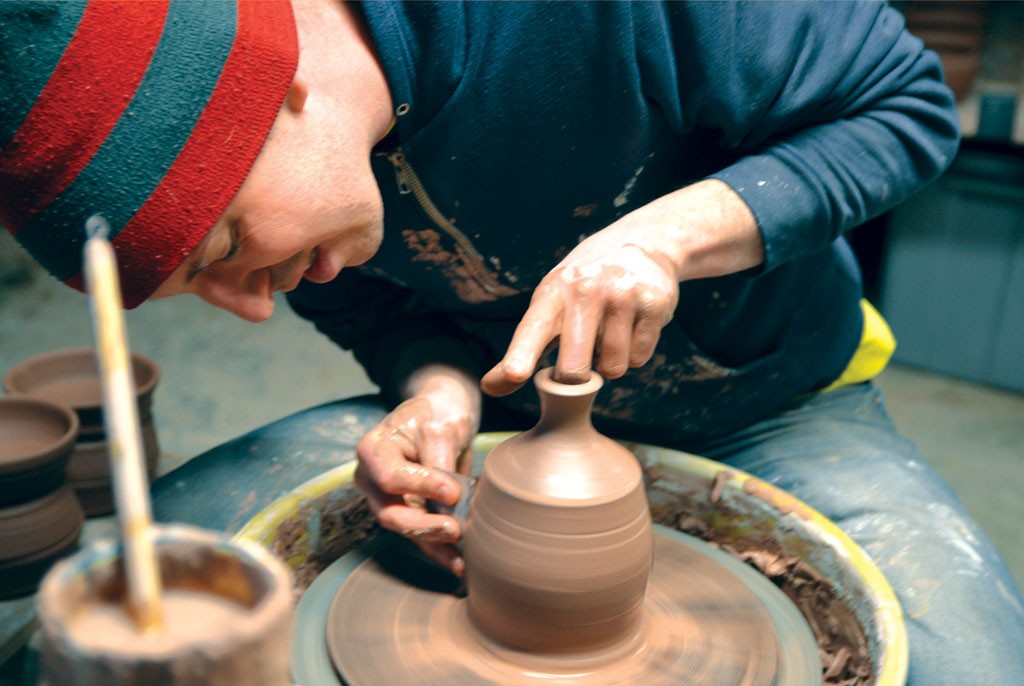 When Tropical Storm Irene ravaged Waterbury in 2011, water flooded the first floor of Jeremy Ayers' home up to the windows. The artist's pottery studio, in the basement, was completely wiped out. Visitors to the large yellow house, in Ayers' family for six generations, won't be able to spot the damage today. The space is warm and dry and smells pleasantly of wet clay.

In fact, the storm directly led to Ayers devoting himself to his pottery business full time. He left a teaching job to rebuild his home and care for his ailing grandfather — who, as a 10-year-old, had been rescued by rowboat during Waterbury's flood of 1927. When Ayers finished the home's renovations in late 2012, he decided to turn his craft of more than 15 years into his main gig.

Ayers' utilitarian stoneware — jars, mugs, vases, teapots, platters and serving bowls intended for daily use — seamlessly melds form and function. The pieces feature bold, striped patterns in a limited, natural color palette: white on brown, white on black, even white on white. "I'm not really into the rainbow-y, runny glazes," explains Ayers. "I'm working with the absence of color. I want it to be about line and form."

Ayers went to art school with the intention of becoming a photojournalist. Once there, however, he became captivated by the potter's wheel. "The 18-year-old me fell in love with the romance" of this old-fashioned art form, he recalls.

That passion continues today. "My favorite piece," Ayers says, "is usually the one that I'm making." 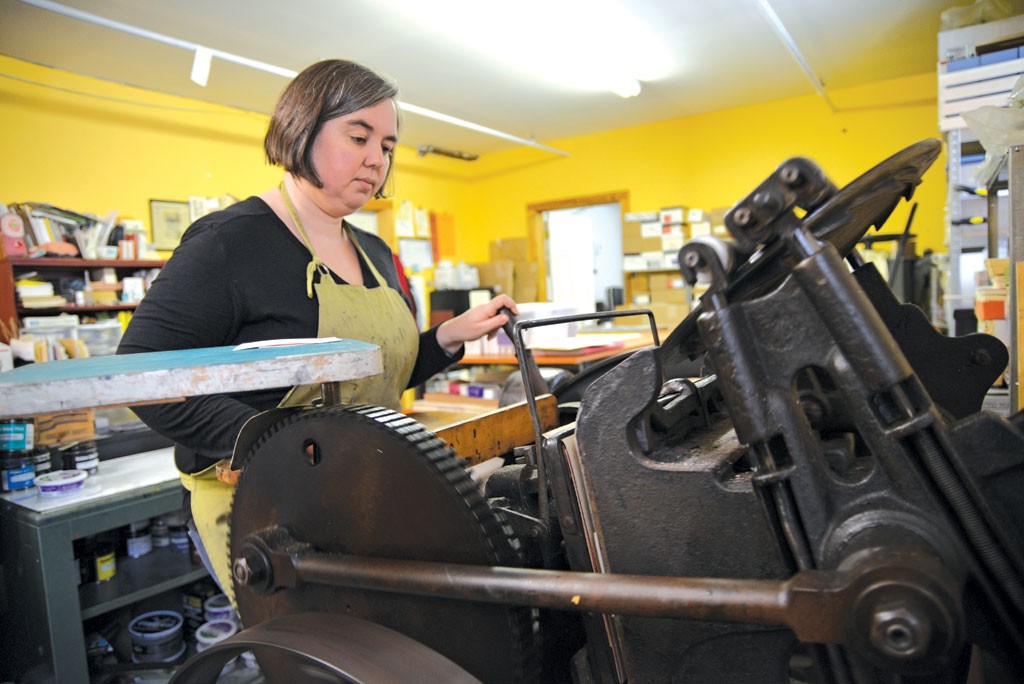 Elegant letterpress printing has become the new standard for wedding invitations, but Kelly McMahon's cheery yellow studio will remind you that this craft is more than a passing trend. Sitting among four other presses is a prewar, cast-iron Chandler & Price contraption. With ornate, twisted spokes and a foot treadle, the machine is so dated that it now looks steampunk cool.

Indeed, until the 1980s, letterpress was the normal method of printing text since its 1440s invention by Johannes Gutenberg. "There used to be letterpress printers in every town," explains McMahon. "Now they're few and far between."

McMahon describes herself as a "one-time poet and type junkie who learned the tools of the trade and never looked back." While getting her MFA in creative writing, she took a seminar on artists' books. "I set some type and I was hooked," she says. "It's a practice in perfection. It's really soul-satisfying to be really good at this one small thing."

Her May Day Studio space, shared with a band and a painter, produces quirky, handcrafted paper goods — including a line of brightly colored, original designs sold on Etsy, from love notes to market totes.

"I came into all of this pretty ignorant of the history of printmaking," McMahon recalls. Now, she says, "It really feels sort of like a duty to learn as much as I can about the way [printing] was done" — and to share it. She'll do just that at Open Studio Weekend, when visitors will be able to run one of her original prints through the press.

In her studio — an old gristmill where grain occasionally still falls from the ceiling — Anne Cady paints a treasured view of Vermont over and over again. It's the Middlebury horse farm where she spent her childhood summers. "The rural countryside gave me so much happiness and enabled me to breathe," she recalls. "I'd come to Vermont in the summer and just go, Ahhh."

That view "is with me while I'm painting, and it comes through my paintings in so many ways," she says — though her canvases never look the same. Cady's work clearly conjures Vermont's rolling hills, looming mountains, old barns and cultivated farmland. But she uses jewel tones and fantastical perspectives that don't exist in nature. The trees look like cotton candy, and the ground seems to glow from within.

Cady is adamant about not playing by the "rules" when it comes to art. On her website, she explains her outlook with a quote from Paul Gauguin: "Do not copy nature too closely. Art is an abstraction; derive it from nature while dreaming in front of it."

That's a lesson she's passed on to generations of art students. "When you're a kid, everybody can draw and paint things," she says. "Then, as you grow, some outside force tells you you can't do things." To counter that force, she began giving backyard classes to neighborhood kids at age 15. After settling in Vermont, she founded and ran an art school for 30 years.

Now, with grandchildren of her own, Cady is still experimenting with creative expression. "I'm playing with composition and color all the time," she says. "There's a rhythm, there's a softness ... there's a magic. It's more like a dream."