Those Mittens Bernie Sanders Wears Campaigning Are Made in Vermont 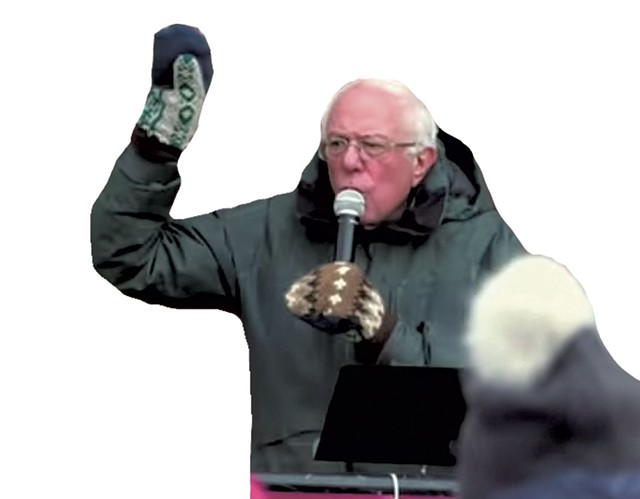 Sen. Bernie Sanders (I-Vt.) is known for his frumpy and unkempt attire. His latest sartorial choice, mittens he wore during the Women's March on Saturday in Portsmouth, N.H., certainly made an impression. The oversize mittens, called "oven mitts" by some, went viral online and soon had their own @BerniesMittens Twitter account.

"Feeling the BERN not the BURN," the account's profile reads.

Jen Ellis, a teacher from Essex Junction, made the mittens and gave them to Sanders. She used repurposed wool from sweaters and lined them with fleece. She generally sells mittens at craft fairs or gives them to friends. Sanders' daughter-in-law, Liza Driscoll, runs Ellis' daughter's daycare, so one holiday season, Ellis made mittens for all the teachers — plus Bernie.

"I just put in a little note that was like, 'I believe in you, I've always believed in you and I hope you run again,'" Ellis said. "And now he is running again, and he apparently is wearing the mittens that I made for him!"

Sanders has been wearing the mittens on the campaign trail for several weeks. Ellis found pictures online from mid-December showing Sanders lending the mittens to a young woman in Pittsburgh, Pa., who was giving him a tour. Inspired, Ellis on Tuesday sent the campaign 10 pairs of mittens to distribute on the trail. She wants one pair to go to the young woman in Pittsburgh.

Ellis said her experience as an educator has helped solidify her support for Sanders.

"You have eyes on the community when you're a schoolteacher, and you really can see what happens when families don't have access to adequate health care, don't have access to basic human rights and needs," she said. "And so I feel like Bernie is speaking to everyone who interacts with humanity."