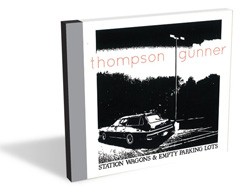 Word on the street is that local alt-country phenoms Split Tongue Crow are on hiatus to “focus on other projects,” to which the local twang-lovin’ scene responds: “Uh-oh.” That seemingly innocuous little phrase is bandspeak for “We’re seeing other people.” And it can be a death knell. Here’s hoping STC are the exception to the rule. But if they’re not, one of the aforementioned “other projects,” Thompson Gunner, should prove far more than consolation.

Rutland’s Thompson Gunner is composed from members of STC, the underrated Bristol-based band Cash Is King and the late local alt-country act Will. But, while those bands trade in generally melodic rock, country and indie fusion, Thompson Gunner are grittier. Their dark, brooding aesthetic has more in common with Social Distortion and Uncle Tupelo than with Gram Parsons or the Jayhawks.

Vocalist Caleb Thomas seems cut from a similar vocal cloth to Social D’s Mike Ness — we’re guessing leather, or at least black denim — it hurts just to listen to their shards-of-glass-in-the-throat delivery. But that sandpaper grit suits Thomas as well as it does Ness, especially in the bleary-eyed ambiance of Thompson Gunner’s debut album, Station Wagons & Empty Parking Lots.

“Bad Rep” sets the record’s defiantly wounded tone as Thomas growls over a sludgy swirl of acoustic and distorted guitars, an organ and a steel guitar that flickers like a neon beer sign in a barroom window.

In keeping with the despairing mood, “Unlikely” injects a stinging guitar attack. The record’s intensity continues to build until we get to “Wash It Down,” a moody, ethereal track that sounds like what might happen if the Bottle Rockets commandeered Explosions in the Sky. We’ll call it post-cow-punk. (And yes, I just invented the term. You’re welcome.)

From there, Thompson Gunner get back to the business of kicking ass. “California’s Burning” is classic, four-on-the-floor cow-punk. “The Cure” is an homage to the Boss, with a Springteenian lyrical sensibility. “Rutland Song” isn’t likely to grace any tourism board ads for RutVegas, but it’s a hard-rocking, bittersweet ode.

The album closes with supernatural flair in “Devils Work” and “Ghosts in the Trees.” The former is a beautifully anguished ballad — and, at six and a half minutes, a bit of an epic. The latter reprises the atmospheric feel of “Wash It Down,” with a touch of gothic psychedelia — imagine if Cormac McCarthy wrote a song for the Doors. It’s a curious, harrowing and immersive finish to a fascinating debut.