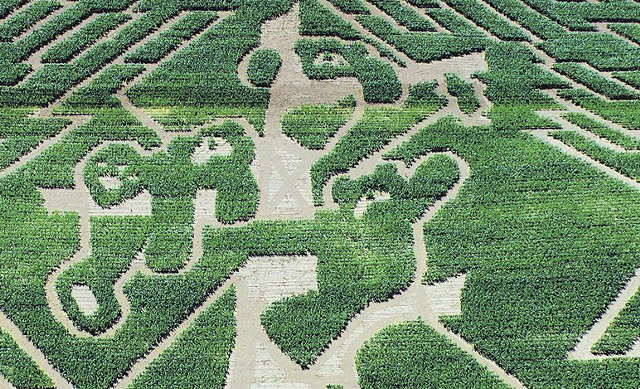 Nothing says mysterious yet wholesome fun like bears "drawn" in a cornfield, right? Right? Or, perhaps, when you've been walking through a corn maze for a couple of hours in the August sun, it doesn't really matter what that maze looks like.

Either way, every summer Mike Boudreau of the Great Vermont Corn Maze in Danville labors with friends and family to inscribe a recognizable shape in — and with — his 24-acre cornfield. For this year's maze, which opened July 29, Boudreau chose four bears. No, not the hulking kind that might stroll through your backyard in search of bird feeders, but teddy bears.

Animals, real or fantastic, are nothing new for the Vermont Corn Maze. Last year's design was a minotaur named Mazer. Previous years have featured a falcon, a gorilla, dinosaurs and even aliens. Asked by phone how he arrived at the bear design for this year, his 19th, Boudreau pointed out that "corn is bear food," after all.

Armed with spray paint, a rake and a "giant stick," Boudreau and his helpers "drew" the teddies back in June, when the corn was still wee. He explained that waiting to see an aerial view of the design can be quite nervewracking, because he's never sure he and his team got it right.

Though Boudreau and co. are careful not to reveal the theme of each Great Vermont Corn Maze in advance, they assure us that knowing it won't spoil the fun. The image included here is only a detail of the big maze. (A smaller "scenic" maze, with directions provided, is also available, as is a non-maze play area for children.)

If you're ready to try solving the corn-maze bear yourself, Boudreau strongly recommends arriving no later than 1 p.m. Because it's hard.

The Great Vermont Corn Maze is open daily, 10 a.m. to 4 p.m. (to 5 p.m. on weekends), weather permitting, through October 15, 1404 Wheelock Road, Danville. $10-15. Find directions and other instructions at vermontcornmaze.com.