This Play Is Your Play 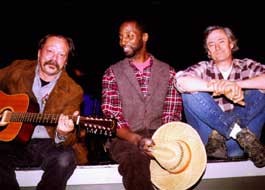 Bonnie Christensen isn’t a folksinger, but her voice has joined in on a good many labor songs while standing in picket lines in New York City. A member of the Screen Actors’ Guild, Christensen is an enthusiastic protester and has often belted the lyrics to Woody Guthrie’s most inflammatory songs.

More recently, Christensen turned to the quiet life in Vermont, and works as a fine artist and printmaker at St. Michael’s College. But her fondness for Guthrie has not waned — her latest children’s book, Woody Guthrie: Poet of the People (Alfred A. Knopf, $16.95), is a concise, beautifully illustrated introduction to the singer’s adventurous life.

Christensen uses the rare medium of block engravings — carved against the grain of the wood to produce a smudgy, granular texture. Once she has added color with touches of paint, the pictures appear flat. But the small sacrifice of foreshortening renders a beautiful, old-timey effect, as if Guthrie’s life is literally etched into history. The impressionist style and hints of watermarks feign old age, making each portrait of Guthrie — hiking along the highway or strumming on the street corner — seem as venerable as a stained-glass window.

Poet of the People is definitely written for progressive parents. Not the revamped fairy tale that most second graders inherit, the book confronts Guthrie’s most controversial moments head-on, including the death of his sister in a fire, his mother’s struggle with Huntington’s disease, and his brief stint entertaining troops during World War II.

The most challenging subject is the labor movement, which eludes many adults, never mind kids. Christensen writes: “It was clear that people needed a voice to speak for them, a voice to ask their questions. They needed someone who was not afraid of the bosses, someone who knew what it was like to be poor.”

Christensen isn’t shy about introducing big issues to young people. In 2000 she illustrated Moon Over Tennessee: A Boy’s Civil War Journal, a historical tale written in free-verse poetry by Craig Crist-Evans. Both books spare children graphic details, but dark powers are always lingering beyond the edges of the page. She has offered the same earthy themes to adults, providing art for a Folio Society of London edition of The Grapes of Wrath.

Politics aside, Christensen gives children a heartening, real-life story. With Poet of the People, she has done justice to a common man who compromised nothing — the perfect role model for early readers.

Woody Guthrie was the hobo’s bard, the patron saint of the wandering man. He was one of those rare artists whose suffering was never contrived or imagined; he lived in dirt-licking poverty and worked his way from coin-collecting street musician to national icon. To call him a folk singer is like saying Orson Welles was just a filmmaker.

Woody Guthrie’s American Song is a resplendent ode to the Depression’s greatest spokesman, the latest in a decade-long series of odes. Since the mid-’90s, Guthrie’s music has been enjoying a national revival, from a 1996 tribute concert celebrating his induction into the Rock and Roll Hall of Fame, to the 1998 and 2000 Mermaid Avenue albums of Billy Bragg and Wilco, who recorded some of Guthrie’s previously unheard songs. This week, the NPR 100 — a list of the “most important American musical works of the 20th century” — featured “This Land is Your Land.”

American Song climbs on the Guthrie bandwagon with a faithful and loving compilation of the folk hero’s finest songs and revelations. Adapter Peter Glazer has assembled some of Guthrie’s most soulful tunes and writings, piecing together a coherent, heart-rending narrative of loss and success. It’s an ambitious project on paper, but even better is Lost Nation Theater’s stunning production.

Glazer is clearly a member of the Guthrie fan club, and American Song could have sunk to the level of high school educational melodrama. But it doesn’t. The show perfectly embodies the folksinger’s Everyman spirit, and no single actor plays the part of Guthrie. The role is traded by passing a worn brown hat from actor to actor, keeping the attention where it belongs: on the music. All the same, George Woodard — of “Ground Hog Opry” fame — plays a mean banjo, and Todd Michael Wheel acts as naturally as he strums the guitar. Michael Henderson has a fine voice and well-honed skill on the harmonica. Together this trio elevates Guthrie from mere troubadour to legend.

The songs alternate with Guthrie’s own quips and recollections, recited by different actors throughout the play. Character interaction is brief, and nobody ever gets in Guthrie’s face. He’s the Billy Budd of the 1930s, impermeable to criticism, and when he recalls the horror of the Dust Bowl and the ramshackle hobo jungles of California, it is understood thatwe must take Guthrie’s words as gospel. This one-sidedness can be a very bad choice. Playwrights have always known that conflict is the stuff of good drama, and American Song has none.

But the high-octane energy of LNT’s phenomenal cast, assembled by director Kim Bent, keeps the show captivating. Gifted musicians pick their strings in the pit while the chorus bursts into song onstage. The actors cover a range of ages and vocal talent — some could use a pitch pipe and a couple more voice lessons — but each singer embraces Guthrie’s songs with an authentic affection. These people truly love singing Guthrie, and that gives American Song a passion that most musicals can only hope to achieve.

The story is simple enough: Woodrow Wilson Guthrie is born in 1912 into a poor Oklahoma family whose farm and crops are wiped out by the Dust Bowl. As a young man, Guthrie roams lonely western roads and hops trains until he reaches California, where jobs are scarcer than he’d expected. So Guthrie does what he knows best: plays his guitar and sings on sidewalks until he is discovered. Some people label him a Communist because of his union songs, but Guthrie just keeps on playing, until his death in 1967.

American Song benefits from well-executed lighting, designed by Bent himself. Robert W. Wolff’s multi-tiered set of weathered planks and old wooden boxes resembles a rundown wharf. Kim Bresett’s costumes are either classic Okie overalls or all-out rags comparable to those in Les Misérables. The only drawback is the theater itself — its high ceiling and stadium seating make for lousy acoustics. Individual lyrics are sometimes lost behind the instruments, leaving the best moments to the ensemble, when the voices are clearest.

The last song, sung by the entire cast, is a resounding version of “This Land is Your Land,” the elementary school favorite that has become an American anthem. The audience is invited to sing along; weeping is optional. Importantly, American Song preserves the lyrics that most kindergarten teachers leave out. As Guthrie questions justice in America, he modifies the refrain, saying not “This land is made for you and me,” but “I stood there wondering if/this land was made for you and me.”

This “if” changes the entire character of the song, turning patriotism into critical doubt. It was a daring thing to wonder during the Depression and it is now, too, as Americans ponder their domestic and international affairs. The question seals Guthrie’s timelessness, ensuring his lifelong dream of being a singer of the people.