'This Land,' at the Hood Museum, Considers the Meaning of Place

The title of a current Hood Museum of Art exhibition is unremarkable — "This Land: American Engagement With the Natural World." One might assume that its theme is the environment or the degradation thereof. To be sure, those concerns are represented. But the title obscures the real significance of this sprawling, 160-artist show: a broadly inclusive definition of "American."

Mounting works from its permanent collection, the museum aptly calls "This Land" a groundbreaking show. It's the "first major installation of traditional and contemporary Native American art set alongside early to contemporary art by African American, Asian American, Euro-American and Latin American artists," according to a museum description.

In other words, the exhibition embraces the perspectives of those who lived here before Europeans arrived, before America gained its dubious reputation as a melting pot and well before the present-day cacophony of differing opinions.

The expansion of what is considered American art results in a multitude of visual treats and conceptual revelations. tweet this

The artworks in "This Land" challenge viewers to consider the meaning of place and who gets to decide what happens to and in it. Inherently, the exhibition also shows us how the denizens of this land have treated each other throughout its history.

For museumgoers, the expansion of what is considered American art results in a multitude of visual treats and conceptual revelations. The consortium of Hood curators — including curator of Indigenous art Jami Powell — must have had a field day browsing the museum's collections; this is a very large and multifaceted show.

To wrangle the quantity of items, the curators grouped them according to seven subthemes. For example, "An Ecocritical Lens" looks at resource extraction and environmental devastation through contemporary photography.

"Expansion, Encounter and Exchange" invites a recontextualization of 19th-century landscape paintings to contemplate manifest destiny — the belief that colonization of the continent was inevitable and justifiable.

"Power of Place" regards both individual and communal relationships to landscape, such as in majestic national park photographs by Ansel Adams and emotive urban images by contemporary New York City-based Dominican artists.

Some visitors might dismiss — or not even notice — these curatorial categories and just try to swallow the exhibition whole. An omnivorous approach, for this viewer, was slightly overwhelming but also exciting. It's recommended if you like the idea of wandering from one room, genre and time period to another and sorting through the mashup on your way home.

Some pieces included in the exhibition might not seem obviously on theme, such as the off-putting 1895 painting "Cowboy Bargaining for an Indian Girl" by Charles Marion Russell; or the surprisingly sweet pastel "Dying Lotus," drawn by Joseph Stella in the early 1930s. Yet each of these depicts an interaction in a place and time or an artist's relationship to the natural world.

One of the strongest eco-focused works in "This Land" is ironically one of the most beautiful. "Oil Boom," a dreamlike, sepia-toned archival pigment print by Chemehuevi photographer Cara Romero, positions a Native American dancer, arms outstretched, against a dystopian backdrop of oil pumpjacks. 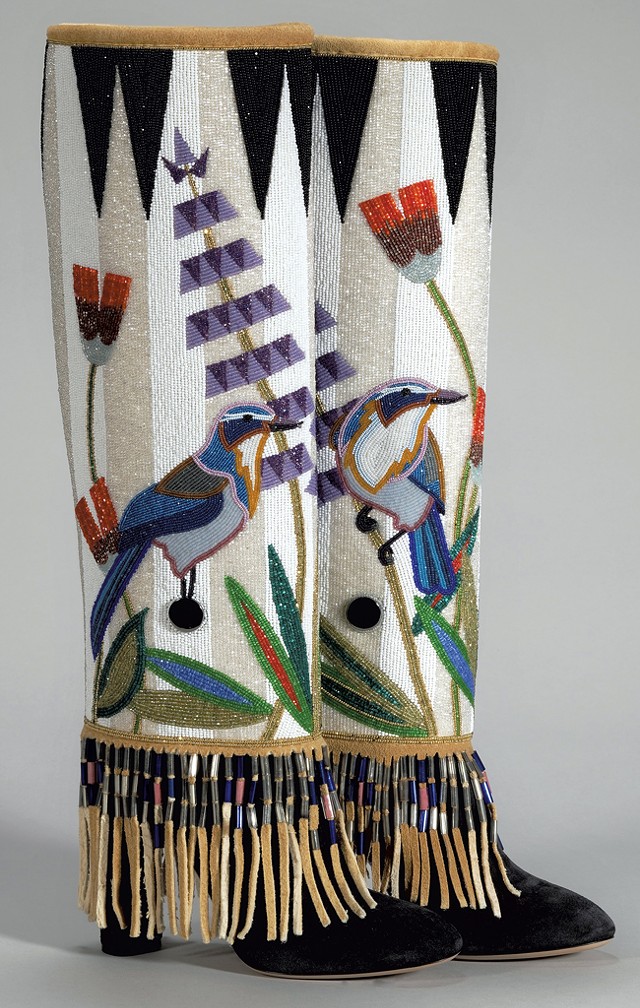 Wall text explains that the image is part of Romero's "Water Memories" series, the works of which "explore water's capacity to hold memory, trauma and life." Her Indigenous narratives, the text continues, "are both terrifying and peaceful." In many ways, that dichotomy ripples through this entire exhibition.

A headline-generating artwork in "This Land" is Indigenous artist Jamie Okuma's glass-bead boots. One might not expect a Hood Museum commission, high fashion and politics to intersect, but that's exactly what happened with "Peep." The stunning, intricately hand-beaded pair of boots features a depiction of a California scrub jay along with abstract botanicals. Last year, the first-ever Native American U.S. secretary of the interior, Deb Haaland, wore Okuma's boots for an InStyle magazine shoot.

Now those boots reside inside a protective vitrine on the second floor of the Hood exhibition, sharing quarters with the likes of John James Audubon's 19th-century illustration of an American buzzard.

One final observation: The Hood, part of Dartmouth College, is a teaching museum. As such, it routinely includes probing questions in its wall text, presumably encouraging students to think more deeply about what they are seeing. Adult viewers who take umbrage with this Socratic approach might want to reconsider the invitation to think deeply. Particularly with this exhibition, some of the questions have very much to do with where we are and where we're going in this land.

The original print version of this article was headlined "Whose Land?"