'This Is Not a Burial, It's a Resurrection' in a Haunting Drama From Lesotho | Movie+TV Reviews | Seven Days | Vermont's Independent Voice

'This Is Not a Burial, It's a Resurrection' in a Haunting Drama From Lesotho 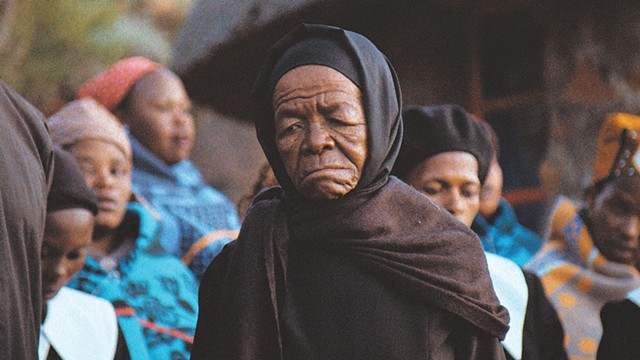 Our streaming entertainment options are overwhelming — and not always easy to sort through. This week, the Vermont International Film Foundation starts a new installment of its Split/Screen series, running April 16 through 25. As befits the week of Earth Day, the focus is on the intersection of environmental and human rights. I watched This Is Not a Burial, It's a Resurrection, a 2019 drama from Lesotho that delivers an indictment of environmental imperialism in haunting form. Learn more at vtiff.org.

In a village called Nasaretha, in the shadow of a looming mountain range, 80-year-old Mantoa (Mary Twala) has just lost her last hope. Having buried her husband, daughter and grandchild, she must now bury her son, a casualty of the South African gold mines. Even the village priest (Makhaola Ndebele), who is no stranger to loss, can't stop her from "regarding God and nature with ... contempt."

A new blow falls on Mantoa when she learns that the central government is at work on a dam that will flood her highland home. The villagers will be relocated to the city in the name of progress. Mantoa's first thought is for the graves of the dead, which must be moved or abandoned to the waves. Determined to stay, she rallies the villagers behind her, but how much can they do to change their fate?

If the above description leads you to expect an African Erin Brockovich, a can-do story of ordinary people fighting the power — don't. To the extent that This Is Not a Burial is a story at all, the closest Western analogue might be the Sophocles' Antigone or the Book of Job.

Writer-director Lemohang Jeremiah Mosese, a Lesotho native who lives in Germany, has created something semi-detached from the conventions of narrative filmmaking: a stately series of scenes that play out in long takes, narrated by a nameless man (Jerry Mofokeng) whom we periodically glimpse in an urban bar. He punctuates his tale with the sharp buzzing vibrations of the lesiba, telling it with the ritual air of something that has already passed into the realm of legend.

That's fitting, since legend is a living presence in Mantoa's life. Though the recent history of her village was shaped by Christian missionaries, she's also intimately familiar with the precolonial, plague-driven migration that brought her ancestors there, telling the story as if it had happened in her own lifetime.

This Is Not a Burial is a story of repeated loss, of "the dead bury[ing] their dead," but also of endurance and sometimes of beauty. In a 2020 interview with Film Comment, Mosese said he chose to shoot in the boxy 4:3 aspect ratio "because otherwise the movie would be way too beautiful and that would overshadow the story."

It's a valid concern, because the film's landscapes are stunningly beautiful, as are its interiors. (Mantoa's hut features a drapery that rivals the credits of Blue Velvet for the dreamlike intensity of its color.) Add to this the soundtrack by Yu Miyashita, which ranges from eerie choral motifs to abstract walls of noise, and you have a film that's indelible on an aesthetic level. Many moments impress themselves on us with the weight of dream or nightmare.

But it's equally clear why Mosese doesn't "want the conversation to end in beauty," as he told Film Comment. He noted in that interview something that isn't spelled out in the film: The dam being built in the name of "progress" doesn't directly benefit the people whose displacement it demands. The drinking water thereby produced goes to South Africa.

Not that it matters either way to Mantoa, for whom home is not a negotiable good. But her resistance, futile as it may be, resonates with the fierce power of a tale passed down over centuries — a tale of those who refuse to forget, and will keep fighting back.

Anbessa (2020; VTIFF Split/Screen, April 16 to 25): For another take on the all-too-relevant theme of displacement, watch Mo Scarpelli's documentary about a mother and son living in a condominium complex newly built on what was once farmland in Ethiopia.

Hyenas (1992; Mubi, Kanopy, rentable): Mosese was influenced by this film from acclaimed Senegalese director Djibril Diop Mambéty, about a woman thrown out of her village for unwed pregnancy who returns decades later rich and seeking payback.

I Am Not a Witch (2017; Kanopy, Tubi, Sundance Now, AMC+, rentable): Set in modern Namibia, Rungano Nyoni's award-winning fable tells the story of a young girl who is sent to a "witch camp."

Honeyland (2019; Hulu, rentable): This acclaimed Macedonian documentary profiles one of the last keepers of wild bees in Europe, showing how new neighbors disrupt her traditional way of life.

The original print version of this article was headlined "This Is Not a Burial, It's a Resurrection 4"