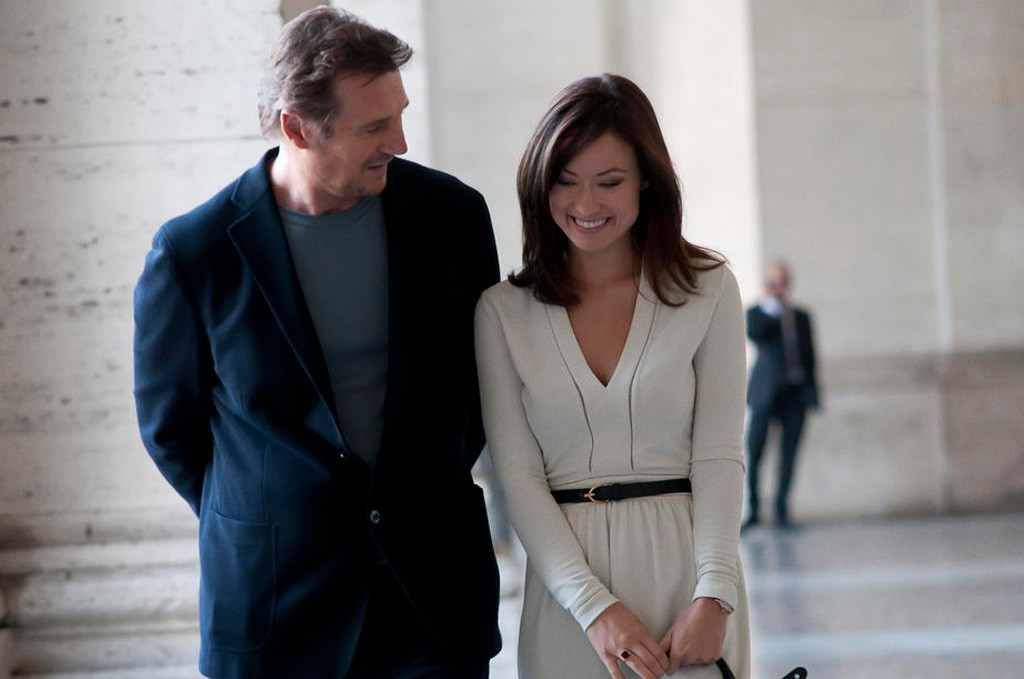 Watching writer-director Paul Haggis fail to resurrect the done-to-death hyperlink trope he used in Crash a decade ago, one can't help but think about something else — anything else. I kept thinking that the timing of Third Person's release couldn't possibly be better, even if its every cinematic element couldn't possibly be more dreadful.Why? Because history appears poised to repeat itself in Iraq.

What could a story about three interconnected couples have to do with the unraveling of conditions in the Middle East? Stick with me. Liam Neeson parts the curtains in his suite to reveal a view of the Eiffel Tower. No, we're not watching a preview of Taken 3, which doubtless will look like fine art compared with the plodding, pointless self-indulgence we are about to endure for the better part of three hours.

Rather, Neeson plays a great writer. You can tell because there's always a bottle next to his laptop and, every few minutes, someone mentions that he long ago won a Pulitzer Prize. His visitor is a lovely young journalist (Olivia Wilde) with a Dark Secret and mood swings in serious need of treatment. They aren't so much having an affair as nervous breakdowns with benefits.

One minute, she's prancing through the hallways nude and giggling. The next, she gets incensed, fills a sink and plops in the pricey watch she brought Neeson as a gift. The couple hasn't had a spat: Haggis just lurches arbitrarily between tones. It's a good thing people keep bringing up that Pulitzer. You'd never guess Neeson is a tortured genius otherwise, since the dialogue the writer-director gives him sounds like lyrics from a Robin Thicke song.

Meanwhile, in Rome, Adrien Brody plays an American who walks into a café seeking a burger and finds the woman of his dreams. How could he resist this ill-tempered Roman (Moran Atias), who scowls at him every time he buys her a drink? And how could he not withdraw his life savings and give it to motorcycle-riding gangsters who've supposedly kidnapped her daughter, though he knows the woman is in on the scam? By the time he learns she's a prostitute to boot, well, the guy's hooked. Love means never having to say you're interesting.

Back in New York, James Franco is a famous painter. Mila Kunis is his estranged wife, a former soap star working as a chambermaid to make ends meet while she tries to get visitation rights after having attempted to strangle their young son. What? It doesn't help her case when she goes all Led Zeppelin on one of the hotel's rooms, the kind of random crap Haggis has his characters do in a futile effort to break up the boredom.

What does all this pretentious intercontinental idiocy have to do with the situation in Iraq? Here's my thinking: Dubya, Cheney and the gang clearly blew it with the enhanced interrogation techniques they used on suspected troublemakers, many of whom are back on the streets of Baghdad making trouble this very minute. The rap music blasted at sleep-deprived detainees 24/7 (seriously) and other mind games didn't get the job done. That's where Third Person comes in.

It's an awful film, but could prove a first-rate psychological weapon. I can't imagine anything more likely to convince an insurgent to spill the beans and rethink his politics than repeated exposure to this glacially paced, cluelessly directed, insipidly written and amateurishly acted monument to meaninglessness.

2014 is barely past its midpoint, but, my friends, we have a winner: Paul Haggis' latest is a lock for worst movie of the year. It's a crashing bore with the tagline "Watch Me."