Things to Do in Plattsburgh When You're Drunk

An unscientific exploration of nightlife in the Lake City 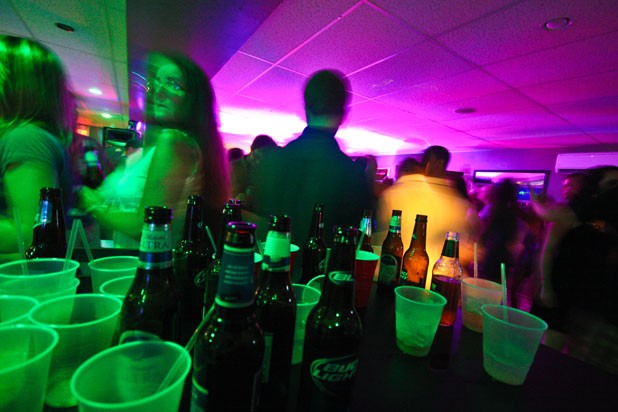 Spend a little time in Plattsburgh, N.Y., and you’ll get the sense that the city has a bit of an inferiority complex. The blue-collar burg of just under 20,000 residents — closer to 80,000 in the greater P’burgh area — has been mired in an economic rough patch dating at least to 1995, when the Plattsburgh Air Force Base closed. The city’s historic downtown is dotted with empty storefronts, its outskirts dominated by chain restaurants and strip malls. An oasis of culture it is not. But, hey, Phish played there once. And at least there’s a Target.

Part of the problem is, well, Burlington, the city’s relatively well-to-do neighbor to the east. Mention the Queen City to a young Plattsburgher, and you’re likely to get a reaction somewhere between longing admiration and sullen jealousy. For fans of the television show “The Simpsons,” Plattsburgh would be like Shelbyville to Burlington’s Springfield. D’oh.

On a recent steamy Saturday evening, three native Burlingtonians trekked from their bustling hometown to the great unknown — to us, at least — that is Plattsburgh. Our quest: to discover the heart and soul of the city, one bar at a time. Among our delegation were this reporter, photographer Ben Hudson and farmer Rob Rock. What follows is a running diary of that evening, presented as accurately as possible. However, in certain instances, names have been changed to protect the innocent/underage/intoxicated.

We check into our hotel room on the third floor of the La Quinta Inn & Suites off Route 3. The beds appear to have been hastily made, and one is missing its pillows. We’re not sure if this is a good or bad omen.

Rob opens a bottle of Harpoon IPA while Ben mixes a whiskey and ginger ale. I sip a beer and leaf through a complimentary hotel pamphlet outlining local attractions, activities and services. I find it curious that the pamphlet’s publisher decided to group restaurants, bars and churches in the same section. That can’t be a good omen.

All dolled up and with a pregame beverage in our bellies, we head down to the front desk to ask the clerk to call a cab. While we’re waiting, we mention we’re in town to do a story on Plattsburgh nightlife and request suggestions for places to go. The clerk’s deadpan response: “There’s nightlife in Plattsburgh?” It’s hard to tell if she’s joking. On our way out the door, she adds, “Whatever you do, don’t go to Rumors.”

Me: So we’re totally going to Rumors, right?

Our first stop is this waterfront joint, which I have been told is the Plattsburgh equivalent of Burlington’s Breakwater Café. That’s not true. Cavernous and impossibly kitschy, the Naked Turtle is like Breakwater on steroids. And Bud Light Lime.

We head to an outdoor bar on an enormous deck overlooking a marina and order a round of beers. Sun-bleached revelers line the wooden railings clad in tank tops or Hawaiian shirts, Docksiders and swim trunks. Boat people. In a far corner, a guitarist plays acoustic covers of classic-rock songs. The television is showing a replay of a New York Yankees game from earlier that day. Ben wonders aloud if they might switch the TV over to the Red Sox game currently being played. A middle-aged man two stools over greets his request with a look of disgust.

After a light dinner, we depart, but first we stop to ask the hostess for a bar suggestion.

“Well, you could try Olive Ridley’s or Peabody’s. They’re usually fun, I guess,” she says. We thank her and head for the exit. “Oh, just don’t go to Rumors,” she instructs.

A leathery man in a tank top stops us in the parking lot. “You’re really familiar looking,” he slurs, wagging a cigarette.

I play coy, but Rob puts the mystery to bed. “He’s on TV,” he says, referring to my weekly cameo on the WPTZ news.

I smile uncomfortably and reply, “I guess so. Uh … thanks for watching.”

We politely decline, saying we have to move to another bar. But he’s persistent.

“Later, then,” he says. The ash on the end of his cigarette hangs limply and has burned down almost to the filter. “We’ll be at Rumors,” he says.

I went to this bar once a few years ago. It’s a great room and a good concert venue. But tonight the band, a tight little duo called the Mumbles, plays on the floor by the front bar, rather than on the spacious stage in the back room. We play pool with a pleasant couple, Bubba and Mike, and split a two-game series. Between games, I order a round of whiskey shots at the bar.

“Singles or doubles, hon?” asks the bartender. I look at her incredulously.

Then it dawns on me. They don’t serve double shots in Burlington. But we’re not in Burlington. I gaze around the sparsely populated room. We’re the youngest patrons by a good 10 years.

We’re outside chatting to a guy in his twenties about living in Plattsburgh. Around us, younger folks mill about, drinking openly on the sidewalk. We mention we’re from Burlington.

We laugh nervously and change the subject. We tell him we’ve been warned to avoid Rumors. We ask if we should go anyway.

“Sure,” he says, dragging on a cigarette. “If you want to catch something.”

We’re on our way to a college bar called Peabody’s, wondering why our Burlington-ness is so obvious.

“Have you guys seen any hipsters tonight?” Rob asks. Ben and I exchange glances and realize that we have not. Just then, a trio of plump young women wearing midriff-baring tube tops roughly six sizes too small stumble past us.

“Shut the fuck up and let’s go get naked, you slut!” screams the middle one, laughing and pawing at her friend’s top.

Mildly horrified, Rob stops in his tracks. “I think I miss Burlington.”

We finally find someone with something good to say about Plattsburgh. Seated at the overcrowded bar, Cindy is a striking blonde who recently completed her PhD at SUNY Plattsburgh and says she plans to stay if she can find a good job.

“I actually love it here,” she says, smiling. We ask why. “It’s home,” she replies matter-of-factly. Then she adds, “You guys are from Burlington, right?”

We arrive just as a band, Capital Zen, is wrapping up its set in Monopole’s second-floor bar. We decide to head downstairs for a drink. After chatting up the bartender, we ask her to take our picture.

“Sure,” she says. “It’ll be a nice souvenir to take back to Burlington.”

Rob, Ben and I exchange glances. She never carded us. And we never told her where we’re from.

This is the first truly packed bar we’ve found. It’s also the strangest, in a way. In one room, a cover band is playing on a corner stage. But between songs, the unmistakable, inescapable throb of house music emanates from a dance floor in the adjoining room.

“I think this bar has an identity crisis,” says Rob.

We order drinks as the band launches into a decent cover of Cee Lo Green’s “Fuck You.” As we walk to the dance floor with our drinks, the bartender calls out to us.

I’m chatting up a pretty local girl who works at a movie theater when an older woman, dressed to kill, interrupts. My new friend talks with the older woman briefly before returning to our conversation. As she’s heading for the door, the older woman turns and shouts back.

“Hey, come find me later,” she yells, over the pulse of dance music. “I’ll be at Rumors!” My new friend nods and waves.

The bars have just let out, and the scene in downtown Plattsburgh would be familiar to anyone who has seen the corner of Church and Main in Burlington on a weekend night after closing time. Shouts echo from all directions. A fight breaks out a block down the street — in front of Rumors, I’m told.

Outside the Green Room, two young, vagabond musicians are busking for a mildly interested crowd of drunks, including a dude in a visor who repeatedly requests “Free Bird.” After a couple of songs — none of which are by Lynyrd Skynyrd — I approach and drop some cash in their guitar case.

“You know,” I say, “you guys would probably have better luck in Burlington.”

“We just came from there,” replies the guitarist. He looks at his friend and adds, “I think we should probably go back. Soon.”

“Us, too,” Ben replies, emphatically. “Although we never did make it to Rumors…”