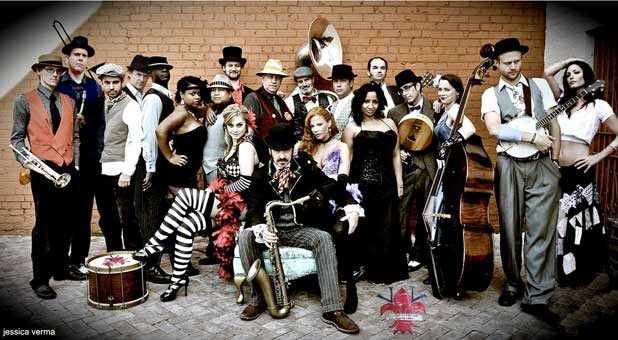 Like so many talented Vermont-born artists, actor and musician Adam Grimes left his home state to pursue his dreams, landing in Los Angeles after college. As an actor, he’s appeared in numerous films and TV shows and carved out a modest career on the silver screen. But it’s as the tenor banjo player with the 19-piece ensemble Vaud and the Villains that Grimes returns home this week. The band plays Club Metronome on Monday, July 9.

Vaud and the Villains combine Grimes’ love of music and theater into a rowdy and risqué stage show, with roots in early New Orleans jazz, burlesque and vaudeville. Band members boast gangsterish aliases, such as Vaud Overstreet, Big Daddy and Two Boots; Grimes’ moniker is Babyface Mahoney. Each character has an often-salacious backstory, and these are woven through the performances, adding a theatrical element to their sinfully manic musical act.

In advance of their Burlington show, Seven Days chatted with Grimes by phone from California.

SEVEN DAYS: You grew up in Burlington and went to the University of Vermont. But you were actually an art major. When did you transition into acting and music?

ADAM GRIMES: I was a studio art major, but acting was something I did in high school, as well. And as an art major you can really only go so far. So I wound up doing a U-turn and doing tons of theater right in Burlington, with every company I could get my mitts on, and did play after play after college.

SD: When did you split town for LA?

AG: Well, it was either going to be New York or LA. But everybody from Vermont goes to New York. I only knew one person in LA, and he said the one thing that sold me. He said, “You know what? Do the long haul first, and if you don’t like it, go to New York and be closer to home.” Sold. So I peeled out in 1999.

SD: Were you active in the Burlington music scene while you were here?

AG: Not at all. I fell in love with music through singing in chorus in high school. But I also wanted to learn an instrument. I was the only one I knew who liked Dixieland jazz. And I don’t know why. No one in my family knows why, either. But I loved it. And year after year on First Night, around three in the afternoon in the Burlington Square Mall [now Town Center], the Onion River Jazz Band would play. And Jamie Masefield was their tenor banjo player. As long as I got to see Jamie Masefield play with that band, I didn’t care how the rest of First Night went. So I decided I wanted to play banjo.

SD: And you ended up studying with him, right?

AG: That’s right. I went downtown on the bus one year and approached him and asked if he’d give me lessons. He asked me who my influences were, and I said, “Well, Preservation Hall Jazz Band and you.” He said he had a lot of mandolin students, but no tenor banjo students, so he’d love to do it.

SD: How long did you study with him?

AG: It was about two years. And at that time, [Masefield’s band] the Jazz Mandolin Project was going pretty hot, so he told me he wanted to grill me on rhythm and chords on the banjo and have me sit in with the Onion River Jazz Band once in a while. So the first we ever played was actually during Jazz Fest on the back of a CCTA bus, just me and him. Then I played a couple gigs with the Onion River Jazz Band.

SD: Do you find either music or acting to be more satisfying than the other?

AG: I’m going to be the biggest cliché in the world here, but they’re so different and they fill me up in such different and amazing ways. It’s kind of become my yin and my yang. Music sort of found me, and this band out here. And it’s so incredible that I’ll forget about acting. And then I’ll get a job and be on set and think, “Well, this is amazing, too.” And I’ll kind of forget about music for a bit. So really, they’re equally rewarding.

SD: You’ve got a pretty lengthy filmography. But I imagine being “Handsome Guy” on “NCIS: Los Angeles” was a career highlight, right?

AG: [Laughs.] Yeah. I’m actually glad you asked about that, but I think it gives a little insight into the biz. It was just a couple of lines and was originally sort of a funny scene, which was why they cast me. So I’m at the Paramount lot at the table read, and this time there was an actual audience there. The whole cast was there, LL Cool J. So we do the scene and this funny moment turns into a very serious moment. And we shoot it. So then about three weeks later I get a call saying they had cut the scene right out of the show. So you’re never guaranteed anything. Sometimes you end up on the editing-room floor.

SD: The band is very theatrical, so having an acting background must be helpful.

AG: Absolutely. As a matter of fact, our bandleader, Andy Comeau, is a very well-known actor out here. He’s had a great career. So every character has a villain name, and we all have a background story as to what crimes we’ve committed. And he’ll introduce certain villains on certain nights and tell their whole story at shows. So with this particular band, it really helps. But these guys are really talented musicians, and at first I had a hard time keeping up with them. But it’s also really about stage presence.

SD: The band has 19 members. That must be a logistical nightmare.

AG: It’s a challenge. Bands with four or five people have a hard time. But this band is such a joyous experience. I can’t describe it any other way. And it affects every single one of us as much as it does the audience. So there is a special quality about the band that make logistics easier to handle. It’s a vibrant, jubilant, life-changing show.