In the fall, dining is a little wilder 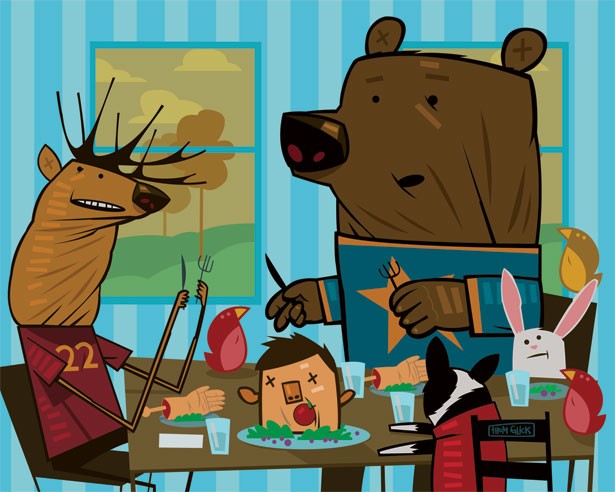 Church suppers - Vermont cuisine doesn't get much more down-home. Driving along the state's rural roads, you'll find unassuming places of worship with marker-scrawled signs announcing "Spaghetti dinner next Saturday, $6" or "Baked Ham Supper, with all the fixins." For a traveler on a cold autumn night, the price is right and the company is pleasant. Plus, there's nothing as comforting as a plate of . . . raccoon?

Yep. As hunting season gets under way, that old standby chicken pie gives way to duck ragout, and pot roast to roasted bear. With a few ultra-specific exceptions, it's illegal to sell wild game, because it hasn't been inspected and pronounced disease- free by the feds. But churches and nonprofits circumvent the law by offering game dinners funded solely with voluntary donations. Another legal way to cater to game gourmets is to serve farm-raised meat. (The term "game" simply designates animals that weren't traditionally domesticated, and can still be caught wild today.) Using these farm-raised beasts, fancy restaurants are getting in on the wild times, too.

The most famous wild-game supper takes place in November at the United Church of Christ in Bradford, a town of 2600 near the New Hampshire border. According to a 1988 New York Times article by local scribe Marialisa Calta, it was "once called 'the Superbowl of church suppers' by the writer Calvin Trillin." This year, the event's 52nd, more than 100 volunteers will prepare dinner for 900 visitors from all over the U.S. and abroad. According to one helper, Barbara Green, the church used to feed well over a thousand people, but had to impose a limit when crowds got overwhelming. At $25 a head for adults, the savory food goes a long way toward funding "really big church projects," says Green.

And what gamey goodies do they feed the masses? Green describes dishes such as roast beaver, bear sausage and raccoon pie, which she insists, "are not exotic." "We do a buffet line, and we tell everybody to try everything," she says. "When you get it on your plate, you wouldn't know one from another." To help out folks who don't want to confuse beaver with bear, the Bradfordites stab each dish with colored toothpicks and hand out "keys" to help diners decode the piles on their plates. Everyone can ID the side dishes, which are autumnal faves such as mashed potatoes, squash and cabbage. "It's quite a full meal," says David McLum, co-chair of this year's dinner.

Some may wonder how the church acquires huge chunks of moose flesh, or bits of bear. "A lot of it is donated by hunters," McLum explains. "Some venison, bear and moose comes from the state as road kill. We're in touch with the game wardens, and if there's something and they don't know where to take it, we process it and get it ready to serve."

The church offers some farmed game, too, mainly rabbits and buffalo. "We go through 350 pounds of dressed rabbit  . . . wild rabbit isn't really feasible," McLum says. But wild beaver is. "Nuisance beavers that trappers catch" are the dam builders unlucky enough to end up as dinner.

You won't find troublesome beaver on Doug Mack's menu, but you will find antelope, elk and alligator. This will be the 11th year that the chef-owner of Mary's at the Inn at Baldwin Creek has come up with creative ways to cook uncommon critters. The Wine & Game Dinner, scheduled for November 16, has sold out every time. So have two of Mack's cooking classes, in which pupils learn how to make rabbit stew, venison pâté and quail salad.

"About 50 percent of the people who come to the game dinner come back each year," boasts Mack. "People are already calling about next year's, and we haven't even put it on the calendar yet." How does he continue to tantalize tasters? "You have to throw them a bone and serve them something different," Mack confides. His "wild card" dish this year is alligator tempura on a bed of spinach, with tamarind sauce and mango chutney.

Despite this year's exotic offering, Chef Mack is a longstanding localvore and a founder of the Vermont Fresh Network; many of the meats he'll use come from Vermont farms. But this year, he's got competition, from another restaurant known nationwide for its commitment to Vermont products. Craig Tresser and Eric Warnstedt, chef-owners of Hen of the Wood at the Grist Mill in Waterbury, are hosting a Hunters' Table Wine Dinner in mid-November. "We're all about seasonal American food, and being the fall and hunting season as well, we thought it would fit well with the time of year," says Tresser. "We've done a couple of other theme dinners, and people have really eaten up the idea, so to speak."

At Mr. Pickwick's Pub in Stowe, game is on the menu every single day. "We've actually been serving game for about 20 years now," says owner Christopher Francis, who guesses that game dishes - including ostrich, pheasant, duck and boar - account for about 50 percent of his sales. Wild beasts are popular in Francis' native England, and he appreciates the distinctive flavors that don't "fall into that mundane category of the typical farmed meats that people get every day." He maintains it's good for you, too: "Game is very healthy eating; it is not tortured with growth hormones or antibiotics, so . . . we started serving it a lot."

If 80-year-old church ladies and young chefs can be believed, "wild things" make good grub, whether they're from the backwoods or from animal farms. The woodsy critters will just be a little leaner than the raised ones. Read on to learn more about doin' up duck and making moose balls, with rough-and-ready recipes from hunters and one formal one from a chef. If you're not a cook, but want to chow down on 'coon with other like-minded eaters, we've got a list of upcoming game dinners.

MORE STORIES FROM THE HUNTING ISSUE:

Of Elk and Men: A Northeast Kingdom "farm" fights for the right to raise fenced game

DIY Deer: A mini course in gutting and cutting

Eating options on the wild side

Location: Hen of the Wood at the Grist Mill, Waterbury

Location: Mary's at the Inn at Baldwin Creek, Bristol