If you're feeling nervous about the state of our democracy, here's something to cheer you up: some of the submissions we received for this summer's Good Citizen Challenge!

From mid-May to Labor Day, young Vermonters all across the state took part in the Challenge, completing civics-related activities on a bingo-like scorecard. This summer's Challenge was inspired by an exhibit at the Vermont History Museum about James Wilson of Bradford, who was the first person in the United States to make and sell globes.

Challenge participants visited the museum, listened to the podcast "Brave Little State," read local newspapers, watched candidate debates and pitched in to help their neighbors. On November 3, we invited them to the Statehouse to celebrate their achievements — and hand out some prizes. We raffled off the Grand Prize, a trip to Washington, D.C., and presented awards for the best work on each of the four types of activities: History, Government, Community and Media. We also welcomed Challenge participants from years past who missed out on a Statehouse reception because of COVID-19.

While seated at legislators' desks in the House chamber, the students listened to state curator David Schutz and Secretary of State-elect Sarah Copeland Hanzas describe the importance of the Statehouse and the work that goes on in "the people's house." Congressional staffers and Good Citizen partners also encouraged young Vermonters to get involved and possibly run for office themselves someday.

Thanks to all of our sponsors and organizing partners, and congratulations to everyone who finished the Challenge! And a special shout-out to René Simakaski, Audrianna Barone and Callum McGregor for completing all of the activities. Well done!

Here's some of their noteworthy work:

I'm not 14 years old — the age you need to be to post on Front Porch Forum — so I had my father post this:

Then I helped sell T-shirts at the Farmers Market. 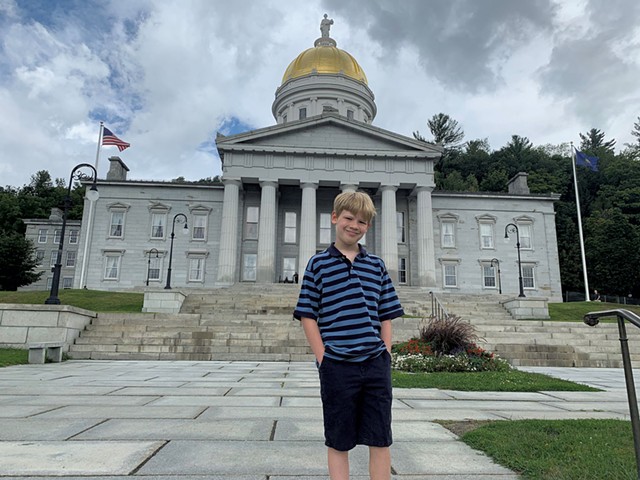 We had a lot of fun on a guided tour and Aidan is now inspired to be a legislative page. We found the places where our current representatives sat in the last session. Lt. Gov.Molly Gray's assistant gave us a personal tour of her office.

We saw the capitol, watched a news reporter reporting on the news in front of the capitol (#21) and met a candidate trying to get signatures to be on the ballot (#18). At home we followed the story and saw the candidate's name appear on the ballot. 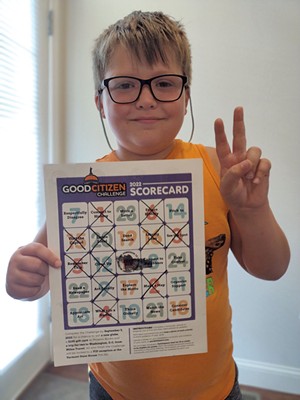 I went to Charlotte Town Hall and the clerk there, Emily, showed me how to look up the warranty deed on our house. She also showed me the maps of the town and I found our property.

My dad and I searched for the deed of our land. Our town clerk helped us. It was cool to see the vault in the town hall.

I drew four girls from different backgrounds looking at an American flag by the Green Mountains. They are arm-in-arm to express unity.

I read the Manchester Journal. I learned about the new principal at my school and how he came to Vermont after he traveled around the world.

I read the Valley Reporter and I read about how people make trails. I found it surprising that you have to plan out and model the trail before you make it or you could make a mistake and the trail will be pointless.

I learned about Anderson Field in Waterbury. I went to the library to get a book about the places in Waterbury and learned that the park was named after Mr. Anderson, who helped in the development and improvement of the park before he died. 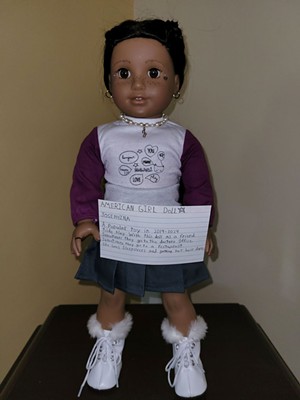 I volunteered at the Johnson Community Food Shelf for three hours. I helped to fill boxes of food by following a list of what families of two or four get for canned goods and nonperishables.

I watched the Democratic Primary Congressional candidates' debate hosted by NBC5. I found it quite interesting.

I chose my American Girl doll to go in a future history museum. I had fun making an index card label: "American Girl Doll: Josephina. A popular toy in 2019-2024. Kids play with this doll as a friend. Sometimes they go to the doctor's office. She loves sleepovers and getting her hair done."

Cate Hjelt of Manchester won the Grand Prize trip to Washington, D.C., donated by Milne Travel. Hjelt also wins a new globe and a $100 gift card to Phoenix Books. She and her family weren't able to attend the Statehouse reception but found out the next day.

"I was really shocked when I heard that I won," Cate said. "I am so excited to go to Washington, D.C.! I want to see the White House and the Washington Monument. I have seen Hamilton, and I want to see if there is a sign about Eliza Schuyler Hamilton helping to build the monument."

All winners received a $100 gift certificate to Phoenix Books, as well as other prizes.

Find out about our next Good Citizen Challenge by signing up for email alerts at goodcitizenvt.com.

The original print version of this article was headlined "Celebrating Civics"