Theater Review: 'You Can't Take It With You,' Saint Michael's Playhouse 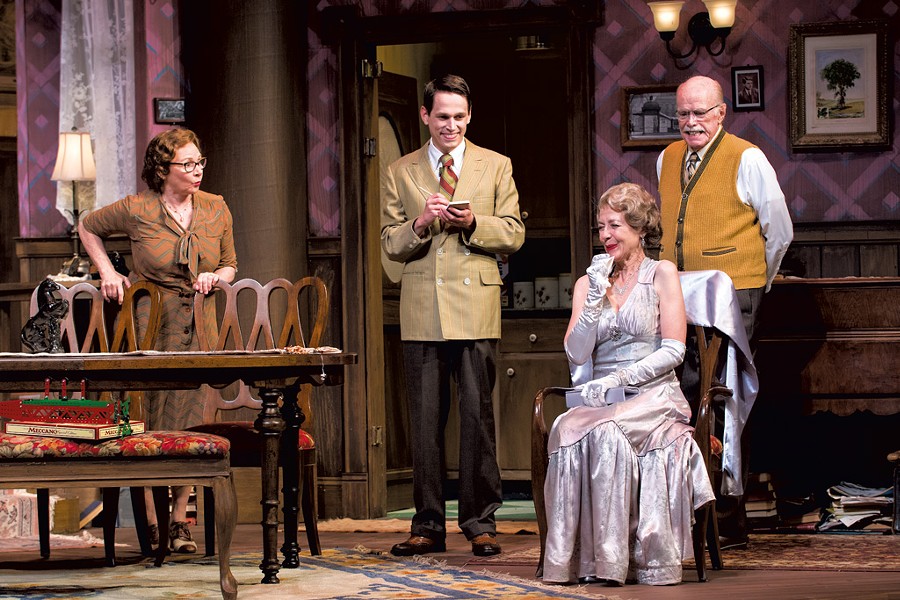 It's spring 1936 in New York City, and another optimistic day unfolds for patriarch Martin Vanderhof, his daughter Penelope, her husband, Paul Sycamore, and their grown children, Alice and Essie. Their extended family and friends fill a bustling household where Martin keeps pet snakes and Essie's husband, Ed, plays the xylophone on a staircase landing. The eccentric family at the heart of You Can't Take It With You is a comic lineup whose only challenge is the straitlaced world outside their utopian home. When they confront it, sparks fly.

In the Saint Michael's Playhouse production, a fine cast paints a very funny portrait of American idealism. Moss Hart and George S. Kaufman won the 1937 Pulitzer Prize for a comedy that floats perfectly between cute and crazy. The Vanderhof-Sycamore clan isn't all that wholesome — Grandpa is a tax dodger, and nearly everyone avoids employment to produce hopelessly mediocre arts and crafts. Their self-absorption exceeds modern YOLO standards. But theirs is a loving, and lovable, family.

Goggles pushed up on his forehead, Paul (Bill Carmichael, dotty yet dashing) arrives from the basement, where he's been tinkering with his fireworks formula — a project that brings new meaning to trial and error. He has a Fourth of July deadline to meet.

Penelope (Sarah Carleton, utterly charming as the household's whirling dervish) writes plays prone to plot dead-ends that result in tall stacks of unfinished manuscripts. Her artistic ambitions extend to painting, as well, but nothing is more important to her than her family's happiness.

Married daughter Essie is in her eighth year of studying classical ballet. Her blindness to her own lack of talent is perhaps her best quality. We soon grow used to Essie's inability to undertake the simplest task without adding an ill-advised arabesque or chassé. Kim Taff gives her just enough skill to allow her to keep dreaming, and enough awkwardness to earn big laughs.

Essie's husband, Ed (Jeffrey Todd Parrott, harnessing childlike intensity and comical exactitude), is a perfect match. Eager for absolutely anything life has to offer, he delivers Essie's homemade candy and operates a small printing press in the dining room.

Grandpa Vanderhof, who left his job 35 years earlier when it ceased to be fun, owns the house in which this large tribe rattles around and has devised its anchoring philosophy: You can't take anything with you, so live the best life you can right now. Kenneth Kimmins delights by dusting just enough tartness over this avuncular figure.

Visitors either fit right in or are knocked for a loop by the clan. An IRS tax investigator (Adam Cunningham, memorable for apoplectic fervor) can't wait to explain the seriousness of tax evasion to Grandpa. But a former Russian grand duchess (Kathryn Markey, nicely preening) makes herself at home in the kitchen, churning out blintzes.

Essie's ballet teacher (the lively Gregory Ramos, master of the lofty head toss) is a Russian expatriate who would rather strip down to his tights and demonstrate an entrechat than tell Essie her dreams are doomed. The actress that Penelope recruits to read her plays is a dipsomaniac who passes out with the grandeur of a diva (Chris Caswell, immensely winning).

The family's hospitality knows no bounds: Their former iceman Mr. De Pinna (John Shuman, earnest and goofy) moved in years ago. Housekeeper Rheba (Lia-Shea Tillet, radiating infectious cheer) enthusiastically serves meals of corn flakes, while her beau, Donald (the sunny Maurice Chinnery), volunteers for chores and considers being on the dole a feather in his cap.

Paul and Penelope's daughter Alice (Jenny Berger, nicely aglow) is conventional by comparison. She has a job and a boyfriend, Tony Kirby (Adam Petherbridge, simply splendid teetering between his conformist upbringing and the twin romanticism of Alice's family and Alice herself).

Tony's parents are the rich, uptight antithesis of the Sycamores, and the families collide at a screwball dinner. When the Kirbys arrive in tuxedo and gown, their jaws drop. Wayne Tetrick is the picture of imperial stuffiness, and Brenda Pitmon is lovely as the socialite whose etiquette signals are lost on her hosts.

The comedy bubbles like a fountain, thanks to the precision of 19 actors working as a team and the vision of director Catherine Doherty. Her clear directorial hand keeps all the plates spinning as the characters juggle simultaneous interactions, and she steers the viewer's focus right where each new gag will bloom.

From Mrs. Kirby's sophisticated gray evening gown to the silly painter's smock and beret Penelope dons, Tracey A. Sullivan's costumes are vivid distillations of the characters. Lighting designer Anthony Pellecchia gives the house a nuanced realism and has some surprising tricks up his sleeve.

Sound designer Joel Abbott transports us to the joyous dance music of the 1930s, and properties designer Jennifer Higgins assembles a dazzling array of bygone objects.

The Depression was far from over in 1936, and comedy was lifesaving. Audiences of today must remember the hopes of the labor movement and forget that both World War II and a new relationship with Russia lie ahead. But no other temporal translation is necessary. Kaufman and Hart's audacity in creating a loving family that's unapologetically silly steals all the attention.

The play's only real demand is a mighty set and a big, zealous cast. This production showcases both and is a perfect example of what Saint Michael's Playhouse does best.