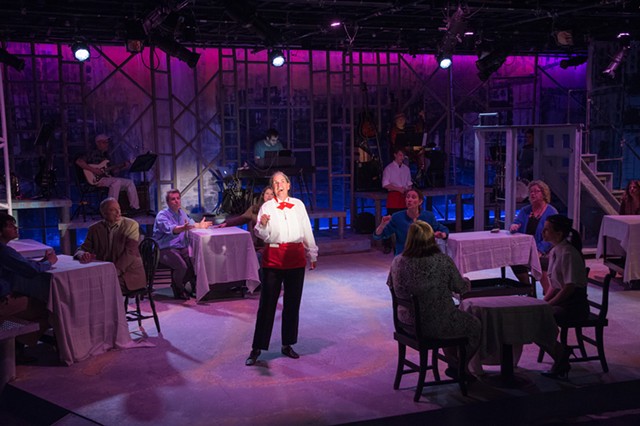 Based on the oral histories that author Studs Terkel collected from working people, the musical Working is a collection of first-person portraits of people reflecting on their jobs. The show mixes monologues and choreographed musical numbers, unfolding more as a revue than a character-based book musical. A waitress, ironworker, teacher, publicist, millworker, cleaning woman and many more get a moment to be heard. Their voices and stories weave into an uplifting tapestry in We the People Theatre's production at the Briggs Opera House in White River Junction.

Terkel's book of interviews was published in 1974, and Stephen Schwartz and Nina Faso adapted it into a musical in 1977. The show has been revised and updated several times. This production presents the 2011 version, spotlighting jobs of today such as hedge-fund manager and tech-support operator and discarding some that are becoming extinct, such as parking lot attendant.

Characters are presented in accurate occupational dress, telling their stories in short speeches or songs, often with the full ensemble embellishing the action or music. Schwartz and Faso wrote the book, but the music and lyrics come from a variety of contributors, including Schwartz himself and Craig Carnelia, James Taylor, Micki Grant and Lin-Manuel Miranda.

Terkel published his interviews with only light editing to preserve the stories factually. The musical not only winnows his subjects to a handful but distills their accounts to brief vignettes. In performance, compression adds power and clarity, and the brevity makes the show rocket along. Director Richard Waterhouse and choreographer Michelle Carlson establish an exuberant, driving pace, and the cast radiates undeniable enthusiasm.

With 17 actors and a five-person band, the show fills the wide stage at the Briggs. Lighting and scenic designer Alex Taylor laces the back wall with industrial pipes over a painted cityscape, presumably that of Chicago, where Terkel lived and conducted many interviews. Taylor places some all-purpose towers of latticework at the stage's corners, perfect for a steelworker to climb or a fireman to shoulder past. A rolling platform changes into an 18-wheeler, construction site and partition.

Some spoken monologues register the disappointments of the workplace, but the songs are largely uplifting — so much so that most tunes feel a little less like a laborer's voice than a Broadway lyricist's. Lloyd Gabourel sings of a mason's love of enduring stone and reluctance to quit each night. Beata Isaacs Randall plays a waitress who's proud of mastering the art of setting down a plate and performs a dance showpiece as she weaves through a restaurant of tables filled with other cast members.

Those attitudes are believable, but the show's tendency to romanticize work makes it a sentimental celebration of wage earners, not a socioeconomic examination. Still, that waitress whirling through a restaurant is a joy to behold, and the song conveys the deep happiness of having a purpose in life. Pride in a job done well can be a source of immense satisfaction.

Jenn Langhus plays a stay-at-home mom who's only important to three people, but her song makes her case. Perry Allison is a third-grade teacher nearing retirement who isn't adapting well to new notions of classroom discipline and education. Hamilton Gillett plays a retired man in a song that alternates a fast tempo for his recollections with a slow one for his current daily rituals.

These windows into what work means to people are affecting, and no matter how specific the job, universal truths emerge. But particulars leave a strong impression, including the ironworker, played by Rob O'Leary, who's proud of doing a job that disqualifies all those people afraid of heights; and the fast-food guy, played by Gunnar Langhus, who exults in riding his bike to make a delivery. Mike Backman plays a publicist who runs on Tums; Mary Ann Stanford is a cleaning woman who hopes her daughter won't follow in her footsteps.

One highlight of the show is Katie Kitchel's performance as an assembly-line worker in a luggage factory. Four other cast members support her solo as they perform the same repetitive motions she does, including a poignant two-second pause waiting for the steam press. James Taylor wrote the song ("Millwork"), a sorrowful ballad of a person strong enough to endure factory life but smart enough to know someone else is able to "use my body for a tool." As Kitchel and her fellow workers repeat their motions, they demonstrate what it's like to be gripped by monotony yet never able to pause.

The production is well staged, and the entire company sings and moves with precision. Music director Matt McGrath leads the band on keyboards and incorporates diverse instrumentation, including a French horn, along with guitar, bass and drums. Costume designer Holly Levison has secured everything from an airline attendant's uniform to a UPS driver's shorts.

We the People Theatre has created more than a musical. The Upper Valley-based company is highlighting a job fair on March 14 that features the show's corporate sponsors and is hosting community conversations after performances. These include discussions of workplace issues, community action and the role of the arts, as well as chances to hear from the cast and crew.

The company's ticket pricing is designed to make theater affordable for a wide audience. It offers seats at $11.50 (Vermont's minimum wage) underwritten in part by patrons who purchase $50 pay-it-forward tickets for premium seating. The lobby is filled with opportunities to reflect on labor, including a display of Vermont artist Heidi Broner's paintings of people at work.

But the main thing We the People has created is a tight, lively show that exalts work and working people. The spotlight is on one individual at a time, but the show is ultimately about the society formed from millions of jobs, all performed together.