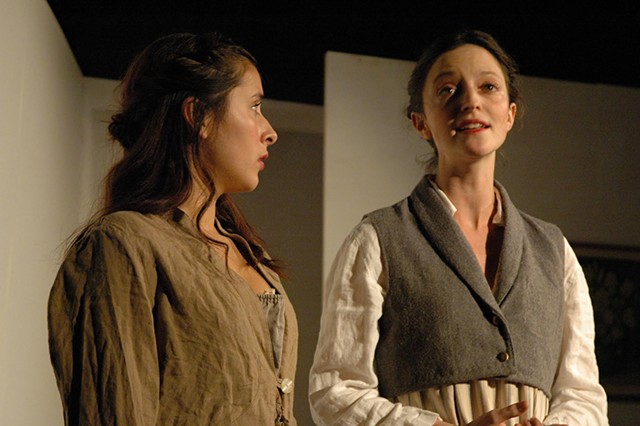 A new play being staged at Burlington's Off Center for the Dramatic Arts presents time travel but is not sci-fi. It examines family dynamics and faulty memory but is not a self-indulgent memoir. It addresses female status and fragility — in relationships, creative life and society — but is not a feminist treatise ... exactly.

Here's what Women's Fictions: A One-Act Play, written and directed by Emer Pond Feeney and produced by Small Potatoes Theater Company, is: 90 minutes of smart, thoughtful, sometimes hilarious and often brilliant theater that centers on the relationships of two sets of stepsisters. As the program informs us, one pair is the historical figures Mary Wollstonecraft Shelley and Claire Clairmont; the other, Sylvia and Maggie, is fictional and contemporary.

Feeney's story toggles fairly seamlessly between the 19th and 21st centuries. The simple set, with a pair of living-room chairs on one side of the stage and a desk on the other, remains the same throughout. This allows for quick shifts between the eras — with appropriate musical snippets by Jason Pepe and light modulations by Grady Shea — and a fluid theatrical experience sans intermission. Indeed, Feeney wisely does not allow a pause in this alternating current of a production.

Before the play begins, the hot-pink high heels parked next to a chair let us know that the first scene will be contemporary. We are quickly introduced to Sylvia, a romance novelist, who during the night has come through a window of the condo owned by her stepsister Maggie and husband Michael. Sylvia's eccentric clothing and wild hairstyle foreshadow her spirited, outspoken and slightly off-kilter personality, and it's immediately apparent that she will provide the play's comic relief — even if her husband is in the hospital. That, ostensibly, is why she's come to crash for a few days.

The comedy is a relief, because Maggie, an English literature scholar and teacher at a community college, is uptight, anxious and clearly displeased about her stepsister's arrival. One reason for Maggie's mood — she seems both wired and tired — is that she can't seem to finish her book about, yes, Mary Shelley and Claire Clairmont. She's obsessed with the women but blocked about how to end their story. History has already shown us their fate, of course, but we'll learn that Maggie believes it was undeserved. She longs to give them "a different ending ... a different beginning." And, we'll find, she wishes the same for her own life.

After Sylvia is shown to the guest/laundry room, Maggie and Michael briefly argue about her unheralded presence. Resigned, Maggie says she's family. He suggests that, because of their parents' divorce and then father's death, the women are not really related anymore. But Maggie's response sets up an undercurrent in the play, as well as the next scene: Stepsisters as a family unit "are as old as time," she says. "Women kept dying, and the men married someone else, and they had more kids."

Enter Mary and Claire, both dressed in gossamer white. Mary — fair, slender, serene and rather prim — is trying to write in her notebook. Claire is dark-haired, lively and pretty, and acting like the teenager she is: petulant, complaining, interrupting. Both young women have, scandalously, run off to France with Percy Bysshe Shelley. Mary is in love with the poet and carrying his child. Claire is in love with the idea of romance and poetry and snubbing conventional society, but she is far less enamored of sleeping in haylofts and lacking a proper dinner. And she wants her own lover. But, Mary cautions her, "There are not so many brilliant poets to go around as you may think. You see how I already have to share mine..."

And so Women's Fictions switches back and forth in time, as Feeney incrementally mines the characters' lives. So cleverly layered and interwoven are their stories that the Mary-and-Claire scenes might almost be Maggie's dreams, taunting her. Eventually Mary has buried three children, lost her husband to drowning and is destitute, and some of her sorrowful lines seem to echo Maggie's own feelings: "It is in our imaginations that we find our most loyal friends"; "So much work and so much of my heart spent with so little reward. I'm so tired."

Mary and Claire's difficulties and Maggie's existential crisis would make this play a downer if not for the humor — and humanity — provided by Sylvia. Feeney gives her laughs with lines such as "Not everybody wants to read with a stick shoved up their ass" and "Have you stayed at a motel recently? It was like where the color beige went to die." But as Sylvia gives up her own secrets, peeling back her insouciant façade, she acquires dimension. And when she tells the truth about a childhood incident that Maggie has long remembered differently, the stepsisters' relationship reaches an unexpected denouement.

Women's Fictions is carried by the skills of its four primary characters, whom Feeney has cast well. As Maggie, Holly Chagnon strikes a rather mournful balance between a highbrow academic and a woman losing faith in herself, who wallows, as she tells her husband sardonically, in her "lack of ideas." Pamela Formica — cofounder of Small Potatoes — is simply delightful as the outré Sylvia. Though a gifted comedic actor, she is equally sure-footed when she must admit loss and failure.

We know Mary Shelley primarily for giving English literature one of its greatest "monster" stories, Frankenstein. But she knew nothing of her future fame. Anna May Sisk's task is to embody a woman, a talented writer, who has chosen a radical lifestyle yet is subject to the censure and poverty it brings — and who bears a great deal of personal tragedy. Sisk never loses her graceful composure but, with sorrowful gazes and weighted body language, lets us know how beaten down her character is.

As Claire, Esse Luna — who turned 18 last Saturday and is Feeney's daughter — perhaps found it a snap to convey an impetuous and naïve adolescent. She has the luminous charisma of youth, but she also has a believable read on Claire's later humiliation, loss and broken heart. When Claire chafes against the limitations placed on 19th-century females, Luna shows us a defiant — if self-absorbed — woman. These are qualities that historical accounts confirm.

Supporting players are solid, too, particularly Joshua Rooney as Michael — Maggie's amiable husband — and Lyndsay Love in a brief but pivotal scene as Tiffany-Celeste, a former writing student of Maggie's who is suddenly successful. Seasoned actor Monica Callan (Emily) and newcomer Nick Wilson (Tom) also appear briefly, as Michael's university colleagues who've come for cocktails before an evening of opera. Their innocent questions about how Sylvia and Maggie came to be related leads to a crucial confrontation between the stepsisters.

Women's Fictions: A One-Act Play, written and directed by Emer Pond Feeney, produced by Feeney and Pamela Formica with Small Potatoes Theater Company, Thursday through Saturday, November 19-21, 7:30 p.m., at Off Center for the Dramatic Arts in Burlington. $12. Tickets

The original print version of this article was headlined "Sister Secrets"