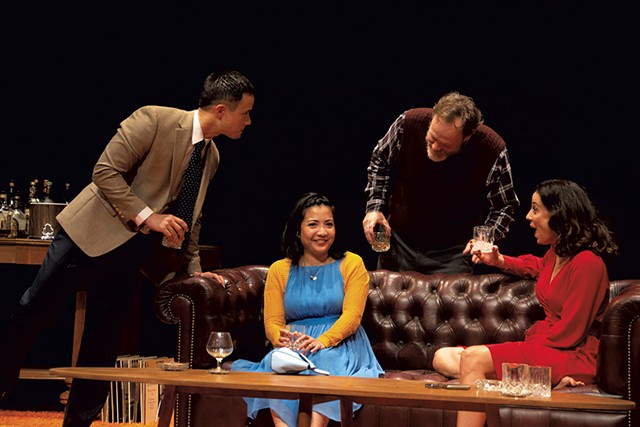 In 1962, when Who's Afraid of Virginia Woolf? premiered, only 2 percent of Americans divorced. Married people stayed married, and married people argued. Edward Albee's play captured the psychological damage that words could inflict, and it was shocking then for its profanity and naked cruelty.

But the play is more than a verbal slugfest, as the Weston Playhouse production demonstrates. It's also the story of how to preserve a marriage by fighting, to love and hate so fiercely that it's hard to know the difference.

The play unfolds in real time over one long night. George is a college history professor, Martha the daughter of the college's formidable president. They stumble home at 2 a.m. after a faculty party hosted by Martha's father. But the night is still young enough for Martha to invite guests: Nick, a new faculty member, and his wife, Honey. Nick and Honey will be catalysts, victims and witnesses who intensify George and Martha's battles. Young Nick and Honey get their chances to fight back, but this is George and Martha's master class in marriage.

Albee's four characters have each failed at something, and their disgrace is the tinder. Intelligence is the spark. And the need to shame someone else to bury one's own humiliation is the flame. The play is a bonfire.

In Weston's production of the award-winning work, what keeps the marriage going is just as visible as the hostility that could tear it down. George and Martha thrive in a chilly partnership because they've each found someone who knows their weakness. It's a limited and volatile love, but it's led them to create a shared illusion. By the end of the night, at rock bottom, they shatter it.

Albee's script is genuinely musical, from the rhythm of a phrase to the symphonic rise and fall of each scene. Weston's four performers work together to create harmonics in tone and tempo, and together they reveal the play's psychological riches.

Though the play's subject is speech, director Mike Donahue deftly uses posture and gesture to embody the story. George leans over Martha on the sofa, suspended between sympathy and attack. Nick gathers Honey in a protective embrace while she smiles with an infant's passivity. Martha springs up to dance on the cushion of an armchair, then Nick emulates her on the sofa. Honey crumples into a heap, only her helpless legs visible over the arm of the chair.

Donahue's elemental visuals portray the motivation behind the words, and he paces the action to balance the untidy endurance of a long night with unquenchable thirst that keeps the characters going.

The director makes the bold choice to place the naturalistic conflict in a slightly stylized setting. The furniture is detailed, but there are no walls save black masking at the back of the stage. By avoiding edge-to-edge realism, Donahue lifts the play out of the theater's frame and keeps the viewer from complacent absorption.

Scenic designer Dane Laffrey conveys the play's weighty mood with a massive, tufted, nailhead leather couch and two matching armchairs, but he places them on a platform raised on open rails. The viewer beholds a cross-section of a living room, from a layer of tawny orange shag carpet to a thickness of floorboard to a lattice of joists that's an open channel for light. A table mid-stage bristles with liquor bottles and a seemingly infinite supply of glasses for the characters to fill and abandon. The room almost erodes under the sparkle of littered glassware as the night wears on.

Lighting designer Scott Zielinski illuminates each act distinctively. The conventional wash in Act 1 is a getting-to-know-you look, but when Act 2 opens, a hot array of white light sizzles on the furniture as the lights themselves appear to aim right at the viewer. Act 3's intense surprise shouldn't be revealed.

Laffrey and Zielinski's visual effects summarize the play but pull viewers outside it. Donahue's conception is aesthetically coherent, but using several different tools to tell the story means the viewer will briefly let go of the characters to marvel at the room's surreal suspension or the lighting's vivid statement. The use of theater's whole arsenal is commendable, but the excellent performances don't need the underlining.

Andrew Garman, as George, shambles around the living room, barricades himself behind eloquence, makes drinks and fetches ice. But all the while he is gauging how far he'll be pushed and what magnificent gambit he'll unleash in revenge. Garman is subtle, landing blows light as a fencer at first, the better to give his darkest moments weight.

Martha is often portrayed as an aggressive bundle of brutish cravings, but Kathleen McElfresh explores her desperation and resilience. She attacks with quiet jabs, not roars. But by the end, her anguish takes the form of raw invention, as if she can will reality to match her imagination. Only when her voice cracks can we see she's lost hope.

As Nick, Jeffrey Omura listens, marvels and finally smolders. He's both fascinated and horrified by George and Martha, and when he's forced to find a way out of the crosshairs of George's contempt, he learns he's capable of cruelty, too.

Kristin Villanueva makes Honey into the play's humorous social compass. She radiates naïve incomprehension as civility is breaking down and suspends herself in oblivion as the proceedings grow difficult to watch. Villanueva's delicate touch adds just enough comedy, and when she, too, is hurt, her wail expresses the pain everyone else labors to conceal.

In 1962, the American family template was rigid: husband as powerful breadwinner, submissive wife, two perfectly behaved children. Albee's characters are more real than that imaginary ideal, and viewers were shocked. If we aren't surprised today, it's because Albee showed us the true heart and heat of a marriage. His vision remains riveting.

The original print version of this article was headlined "Marital Abyss | Theater review: Who's Afraid of Virginia Woolf?, Weston Playhouse"