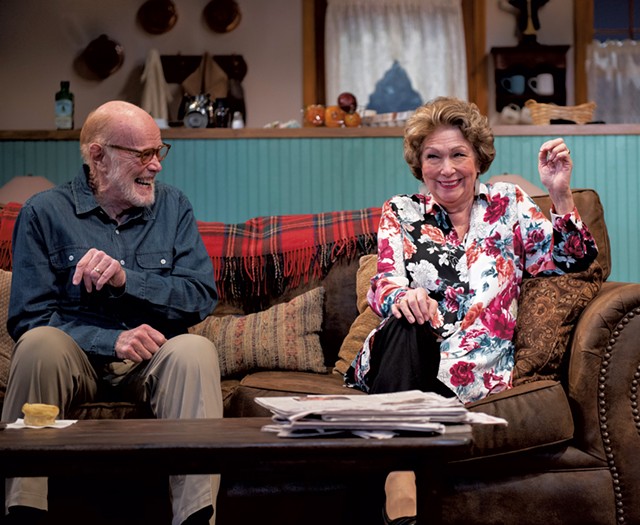 Northern Stage has made a point of developing emerging playwrights, supporting their work through readings and workshops, and cultivating a local audience willing to see new work. Writing a play is rarely complete until the playwright sees and hears actors portray the action, and now Marisa Smith gets the benefit of the world premiere of her comedy Venus Rising. Audiences get an amusing, briskly paced rising-from-the-ashes story.

Smith contrasts the attitudes of two generations when a mother and daughter both find themselves at the comedy version of rock bottom. Julie, the daughter, has returned to her childhood home after her husband threw her out; their amicable divorce is under way. Cora, the mother, has been a widow for five years and spends her days stiff with arthritis, her horizon limited to a television screen.

As Julie wheels in her suitcases, her own three children are settled into college and semesters abroad. Her energy is channeled into amateur hypochondria; she makes poultices and frets over brain cancer. Cora has only strength enough to hurl sarcastic barbs from her recliner and to fend off Julie's ridicule of the white wine she buys at CVS.

The plot premise could lead to comic confrontations, and Venus Rising is a pleasant diversion that could become a solid play after further revisions. Northern Stage's commitment to an emerging playwright is laudable, but Venus Rising is not yet strong storytelling.

The core problem is a lack of problems: The characters aren't tested by obstacles. Worse, Smith provides external solutions before the going gets rough, keeping the comedy light by fixes that border on fantasy. Night falls at the end of Scene 1, but the morning of Scene 2 turns out to be several weeks later, and suddenly Cora has a new lease on life after a neighbor, retired chemistry professor Winslow, has shown a romantic interest. He's charming, and now the only conflict is Julie recoiling from any allusions to her mother's sex life. That's good for a few laughs, but not nearly as many as the script attempts.

Smith's other magical solution is vanquishing Cora's arthritis pain with Winslow's deceased wife's leftover morphine. In some rather careless writing, the playwright tosses out questionable ideas about pain and addiction that run counter to the current thinking on opioid addiction. But let's take them as breezy comedy and not public policy; for humorous purposes, we can let the playwright get away with saying there's such a thing as an "addictive personality" and that Cora doesn't have one. She'll be just fine even without a doctor's prescription, because she's earned a second chance at life.

If the play's meatiest matter is Julie's need to find herself now that her kids have grown and her marriage has ended, Smith doesn't get around to it until an upbeat, and contrived, ending. It's prompted by Julie's high school friend, Grace, who nudges Julie to "get some better dreams" — and Julie is all-too-suddenly capable of doing so. Rule No. 1 of the happy ending is that characters have to fight for them, not just deserve them.

If the text has some flaws, the play is nevertheless an occasion for some fine performers to enliven the show. Smith has created roles for two older actors in Cora and Winslow, and the Northern Stage production fills them wonderfully with Diane J. Findlay and Kenneth Kimmins.

Findlay is a firecracker, even when confined to a recliner. When she's let loose to enjoy her romance with Winslow, Findlay shows the kind of gusto that turns aging gracefully into love of life. She whirls about the kitchen, baking muffins and keeping Julie in line with sharp remarks, all with a grin that lights up her face. Findlay nearly rescues the play by showing Cora's ability to find that smile again, without taking joy for granted.

Kimmins gives Winslow bountiful enthusiasm — this emeritus chemistry professor looks like a bubbling beaker himself. Kimmins' happy energy overturns the grim image of geriatric sex that Julie cringes to imagine. Winslow's scenes are brief, but Kimmins gives each exchange the spark of a twinkling grin and crisp rapport with Findlay.

As Julie, Laurel Casillo has the comic polish to connect with other actors and bring out the humor in rat-a-tat exchanges. Casillo listens, reacts with wide eyes, then lands her laugh line. Laurie Wells plays Grace with high spirits and energy.

The set by scenic designer Reid Thompson is a triumph. A living room and library are framed by a giant reproduction of a section of Sandro Botticelli's "The Birth of Venus." The library's bookcases also include reproductions of classical sculpture, prominent among them the ancient Greek "Venus de Milo." The proscenium set takes advantage of the high angle of seating in the theater to reveal a beautifully detailed kitchen upstage.

Lighting by Jennifer Reiser is especially effective, including loving illumination on the sculpture in the bookcases. Sound designer Ben Montmagny treats the audience to bebop jazz during scene changes, perhaps a reference to Cora's 1950s youth. Costume designer Barbara A. Bell found bright floral prints for Cora's rebirth and a black-and-gray palette for Julie's low point.

Smith's previous premiere at Northern Stage was Mad Love, an inventive romantic comedy that wrapped a group of oddballs inside a story about the dating scene. She's a playwright to watch, and Venus Rising is already able to give talented performers a way to delight an audience. The crowd last Thursday laughed freely, and Northern Stage has showcased the new play in high style.

The original print version of this article was headlined "Second Chances"