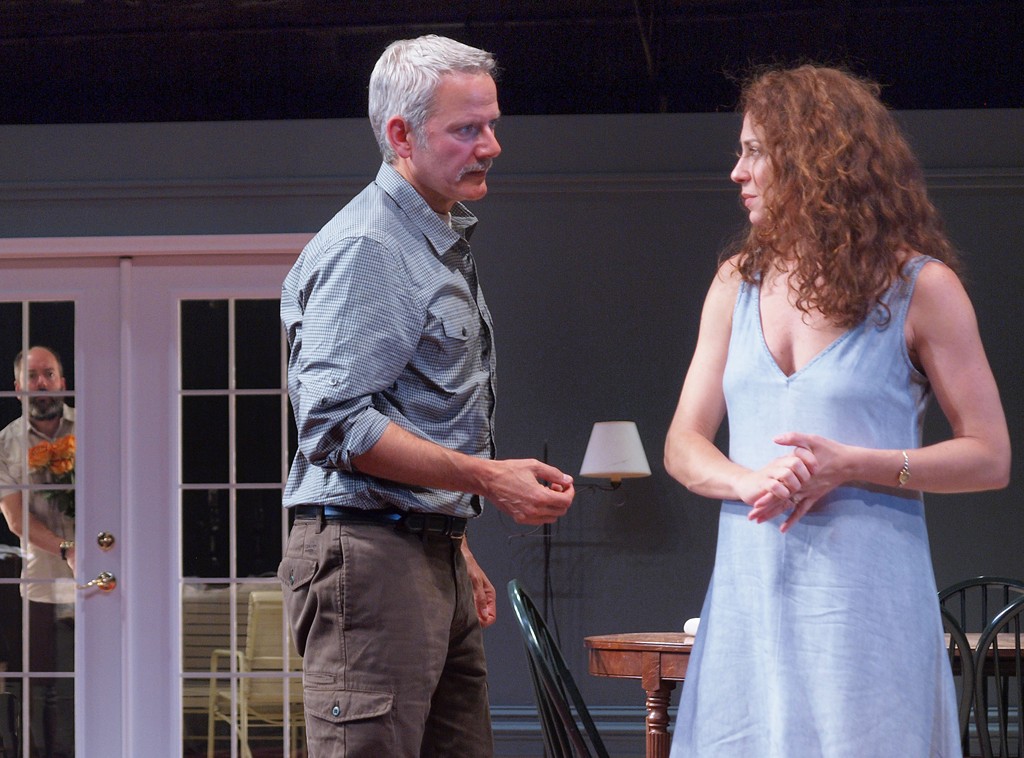 In a fresh, playful production of Annie Baker's adaptation of Anton Chekhov's Uncle Vanya, the Weston Playhouse offers audiences a chance to rediscover the play's delicate blend of comedy and tragedy. Presented with a contemporary sensibility, this production makes it easy to recognize ourselves in the sorrows, foolishness and hopes of the characters.

The plot gives us three lovesick souls doomed not to captivate the objects of their affection. Astrov, a country doctor, and Vanya, the manager of his dead sister's estate, both yearn for Yelena, the second wife of Serebryakov, a professor at least twice her age. Sonya, the professor's daughter with his first wife, is infatuated with Astrov.

Serebryakov and Yelena have moved to the country estate for the professor's retirement, but their arrival has unsettled the rhythms and customs of the farm. Serebryakov makes an old man's ceaseless demands and a hypochondriac's irrational complaints, while Yelena lounges about, exuding indolence and boredom, the prerogatives of her beauty.

Vanya and Sonya have labored to manage the estate, and have given up hopes for their own lives to assure that a steady stream of income flows to the professor to support his more important work. But now Vanya has concluded that Serebryakov's work is actually meaningless, and the pathetic desire he feels for Yelena is barely enough to give his own life meaning. Various retainers and family members orbit the household, adding cheer (the dim-witted peasant Telegin) or gloom (the sharp and fussy Maria, Sonya's grandmother).

As the characters bemoan their lot, Chekhov withholds judgment; he is a compassionate observer of human frailty. If his plays have a message, it's to learn how to forgive, because we're all bumblers here. Uncle Vanya contrasts the hard-working Vanya and Sonya with the lazy, privileged Yelena. But this is no morality tale — both approaches fail to answer the characters' questions about the meaning of life, and Chekhov's endings never involve rewards or punishments.

Baker's adaptation hands us virtually a brand-new play. The irony of Chekhov productions is that his groundbreaking naturalism can come off as mannered when the translation uses a formal tone, or the production strains to convey a remote period, stiff collars and all. Baker's text employs colloquial speech, but her transformation goes further. With simple, clear language, she hits on the contemporary expression of doubt and despair and the counterbalancing role of hope.

There's a distinction between adaptation and translation here. Baker doesn't read Russian, but worked from a literal translation by Margarita Shalina to write dialogue that sounds natural, with a fine level of unforced poetry to it. The script follows Chekhov's text thought for thought, and doesn't add or subtract or impose new themes.

Baker's approach by no means requires contemporary dress, and in fact allows a vague timelessness — everyone still travels by horse, and a peasant is still a peasant. Director Mike Donahue sought an approximate sense of contemporary Vermont for his setting, with costumes by Anya Klepikov that capture the characters in styles we can recognize from our daily lives.

Donahue uses the ambiguity of time and place to make us conscious of both the artifice of the theater and the easy naturalism of unaffected performances. Set designer Dane Laffrey boldly rips the top off the stage by dispensing with the teaser curtain, and leaves the back loading door not just visible but wide open to the late summer evening. In the house, the blackout curtains are open at the start of the play so we can see the day's last sunlight as we stare at the three walls of the deep set. Those walls are painted the same blue as the proscenium columns, making a little game of determining where the edge of the theater might truly be.

Donahue starts the play without a sharp line, to blur further the boundary between real life and theatrical event. While a curtain speech is still under way, an actress strolls on stage, engaged in a crossword puzzle. It turns out to be Marina, the household's old nurse, making herself comfortable on the porch where a large electric coffee pot serves as a samovar. We aren't in Russia or Weston, Vt.; at the beginning of the 20th century or well into the 21st; watching a play or watching real people. We are having an experience that combines all those points of reference and ultimately opens us to see ourselves.

Donahue's interpretation takes several big risks, and the talented cast wholeheartedly brings it to life. The production style is mischievous and irreverent. Using the small excuse of getting Yelena and Vanya to sit on the lip of the stage, Donahue has Vanya pause on all fours, groveling toward her in vain. Freed of period and any strict notion of what Chekhov must be, the director exaggerates for effect. Some viewers might find this lightness shocking or wrong, but the path it blazed toward the heart of the play left this reviewer exhilarated.

Donahue gives Jeanine Serralles, as Sonya, the most hyperbolic mannerisms. Like a very young, excruciatingly self-conscious girl, this Sonya tugs at her sloppy sweatshirt, fidgets, mumbles and spills her tea while clumsily trying to paraphrase her idol Astrov's ideas about the beauty of nature. Then, when she feels enough ill-founded hope to tell Yelena about her infatuation, she gushes like a girl at a sleepover.

In acting terms, this work would typically be called "too big." Serralles veers toward caricature to emphasize the intensity of youthful, unrequited love. It's startling, and it's a big risk to reveal a human quality by amplifying it. But making the character this oversize sets up the poignancy of the play's last scene, in which Sonya must find a very different source of hope from the love that briefly buoyed her.

The entire cast is excellent. Campbell Scott's Astrov strikes an ironic distance from others, but the actor reveals just enough inner pain to show why he's compelled to do so. As Vanya, Liam Craig spends much of the play dripping with bitter disappointment, then rises from his rage to accept his life in the play's harrowing but hopeful conclusion. Kathleen McElfresh makes Yelena more a disdainful idler than a sexual siren, with an easy languor that quietly conveys the gnawing limitations of a life of ease.

Chekhov's vantage point is both distant and tender — he asks the audience to take an unflinching look at deeply disappointed characters, but also to recognize how they didn't really stand a chance. Life is that difficult. Joy is that fleeting. Chekhov's genius is allowing those hopeful moments to stand equal with the sorrows. Weston's magical, audacious production unlocks that hope. m

The original print version of this article was headlined "Vanya, Here and Now"