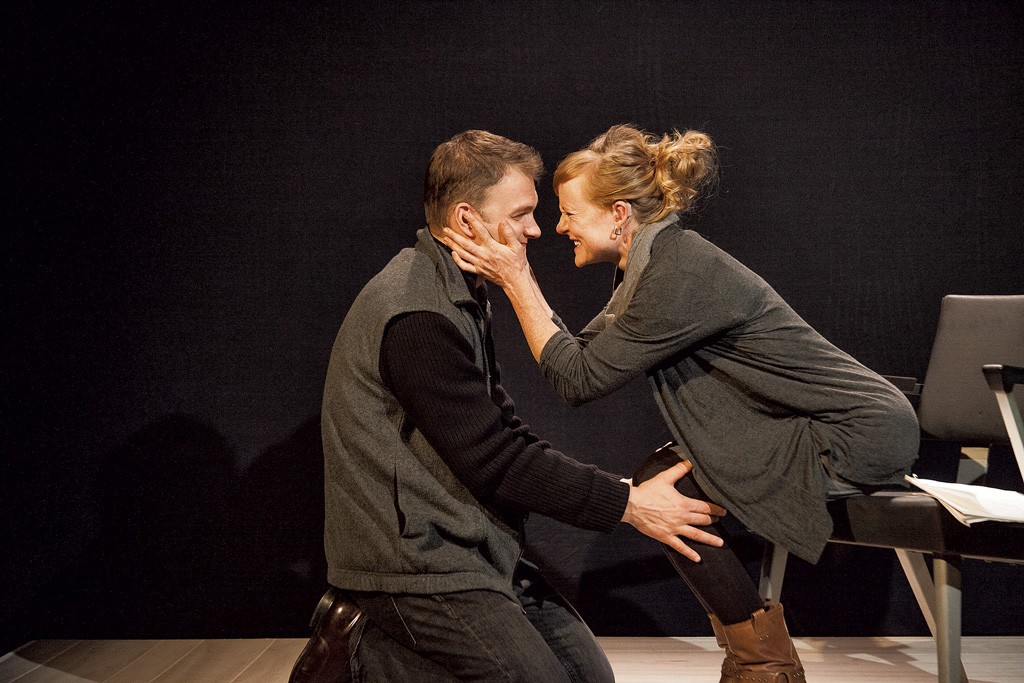 Being accepted isn't the same as being understood. The six characters in Tribes who are striving for both use a torrent of words, but that's only part of how they communicate. In the remarkable new play from English playwright Nina Raine that opens the Vermont Stage season, a whip-smart family adept at verbal sparring connects through speech, silence and their mutual understanding of each other as a family tribe.

Tribes received the 2012 New York Drama Critics' Circle Award for Best Foreign Play and the Drama Desk Award for Outstanding Play. It premiered in London in 2010, and audiences will barely spot the changes necessary to make a British family American. Raine has a finely tuned ear for natural language, and great wit. The characters are real enough to annoy as well as enchant, and seeing them argue is seeing them at their best.

The parents are both writers: Christopher an academic critic with little tolerance for others' arguments; Beth a would-be novelist attempting a personal tell-all that suffers from overuse of a thesaurus. Their three children, all in their twenties, have boomeranged back home.

Daniel, the eldest child, won't find a job but will take stabs at writing a thesis about the limitations of language. Middle child Ruth can't find a boyfriend and is starting to realize that her singing career may not go much further than the local pubs. Billy is the youngest, and the family swirls around him in loud chatter and half-finished arguments. The play opens with the cacophony of their dinner together. Billy is deaf, and when he stays alone at the table after the meal, the barrier between him and his family is suddenly clear and poignant.

Billy was raised to be part of the hearing world, wearing hearing aids and lip-reading. His parents refused to let him limit himself as deaf, which also means they rejected something about him. When Billy meets Sylvia, a child of deaf parents who is losing her hearing, a new world opens up. Sylvia teaches him American Sign Language and introduces him to the deaf community, another tribe with its own hierarchies. The play proceeds to explore both the tools of communication and the sense of identity that people draw from the tribes that welcome them.

Conversation can be a competition, as this family proves. The play helps us notice multiple languages at work — speech, music, American Sign Language, opera lyrics, facial expressions, stuttering, lip-reading, online Chinese lessons, body language. All of these are used to express needs, and often those needs aren't acknowledged, let alone met. The play is a stunning demonstration of how people connect emotionally using whichever language seems to suit their purposes.

Director Mark Alan Gordon elicits nuanced performances from an ensemble that works together with the attention of musicians. Because the characters interrupt and ignore each other, the actors must develop their own layer of communication. Gordon creates conditions that help the actors reveal character and connect with astonishing power.

Dale Dymkoski uses an arresting physical stillness to center Billy and establish the character's silent strength. His expressive face is free to release the emotions that Billy has been stuck guarding from a family that rarely listens. As he uses his entire body to express himself, he achieves eloquence without words. Dymkoski was born with significant hearing loss and can perform with a deaf person's voice, but his greatest acting skill here is imbuing Sign with pure emotion.

As the loud and bullying Chris, Steve Small has the courage to make the character so real he's unlikable. Small snaps his attention from point to point, shutting a book to disparage the author's argument with the same sharpness he uses to reject any family member's statement he doesn't care for. He towers like a tough guy, but Small is funny, too, and when he needs a reaction, he puts all his heart into getting it.

Karen Lefkoe, as Beth, shows a mother's little flickers of hope when her children seem to be at peace, but this mom's no sideline cheerleader. Beth keeps right on ironing, head down, when her daughter indirectly asks for encouragement. And when she bickers, it's not so much nasty as an acknowledgment of the family's life force.

Lida Benson gives Ruth a goofy ease with loose gestures and lots of playful body language. Sibling rivalry for these characters means keeping count of everything in a family where no one is ever loved enough. Benson has Ruth's ears always up, but she also shows her heart, as Ruth struggles to love Billy and Daniel despite her jealousy of her brothers' bond.

In a complex role, Aly Perry triumphs as Sylvia. Without sentimentality, Perry portrays the wrenching transition from hearing to deafness. She gives the character all the sarcastic armor the script provides, and then reveals the harrowing need for it. When Sylvia describes, with visceral clarity, the experience of no longer hearing her own voice, she makes Billy understand a loss different from his own.

Andrew Butterfield is all physical and verbal jangles as Daniel. He can't stay still and can't listen to anyone, but he can ridicule his loved ones, often just to prove he knows them that well. Dan is fighting his own problems, and Butterfield masterfully shows the character deteriorating before our eyes. His histrionic need to talk is a way of muting the auditory hallucinations that plague him. Pulling his hoodie over his head, Butterfield expresses acute pain with exceptional precision.

Blair Mielnik's set design emphasizes the family's overflowing expressiveness by cluttering the stage with personal items linked to each character. FlynnSpace puts the audience so close that we can read the book and magazine titles and see what's on an iPad screen. This dense pile of stuff also conveys the family's reckless attitude toward housekeeping — as narcissists, they all have something better to do.

Great productions often reveal theater's power, as actors reach for expressive moments. With this exquisite production, Vermont Stage not only proves the power of live theater, but exemplifies the possibilities, and the limits, of communication itself.

The original print version of this article was headlined "Common Language"