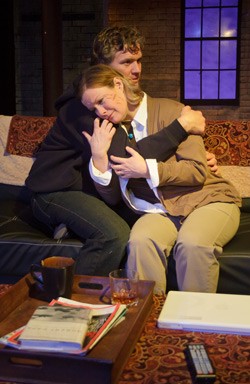 Playwright Donald Margulies’ Time Stands Still tells the story of two war veterans, but not the sort you expect. Sarah, a photojournalist, and James, a freelance writer, are in their eighth year of living and working together. Which makes it their eighth year of putting off getting married. After ample experience covering the world’s wars and atrocities, Sarah and James are well schooled in pain meds, deadlines and the chaos of war correspondence. The play begins as they return from assignment in the Middle East to their Brooklyn loft.

This homecoming is different: Sarah has barely survived an injury, and James has seen one too many explosions. Both have reached a crossroads and must decide if they prefer the physical danger of frontline reporting or the emotional danger of committing to their relationship.

Margulies adds to this conflict a couple on an altogether different trajectory. Sarah and James’ photo-editor colleague, Richard, has hooked up with a sweet young thing who is today’s guileless, striving-hipster version of a dumb blonde. Sarah and James promptly sell her short, but Mandy has something the other three characters lack: a fully developed emotional core.

In Vermont Stage Company’s polished production of Time Stands Still, which opened last week, the performances, staging and story are gripping from the moment the lights go up.

The script is perfectly constructed and beautifully paced, moving effortlessly between humor and dramatic intensity. Margulies draws four complex people and gives us reasons to care about all of them. But he’s also generous in doling out their flaws, and the play stubbornly resists easy categorization or simple solutions. This is a play about ideas, which we experience through characters who have a vested interest in facing them.

Once again, VSC works magic with the intimate environs of the FlynnSpace. Set designer Blair Mielnik brilliantly builds realistic detail in a three-quarter-round playing space that gives director Gregory Ramos freedom to present a range of situations, from intimate to confrontational.

Ramos keeps the energy pulsing with movement that underscores intentions and concentration on the characters’ rapid-fire connections, while still serving the naturalism Margulies intends with his unmannered, overlapped dialogue. By building an ensemble acting style and locating the tension in each moment, Ramos draws us in, the better to savor characters and not just performances. We are in the loft, not outside peering through a window. That proximity makes us feel in the line of fire, too. This challenging intimacy subtly underscores a journalist’s need to pierce private walls to make stories, and the emotions beneath them, public: What entitles a photographer to shoot moments of great human emotion and then hand over the shots to viewers like us?

Chris Caswell plays Sarah with tightly concentrated calm. She has the hard edge and a ready supply of the cynical and self-deprecating wisecracks that Sarah needs for a career as a photojournalist in a war zone. When Sarah’s shell briefly cracks, Caswell nails the emotion, letting the truth of the moment surprise and overwhelm her. Caswell makes us care about the reason Sarah has constructed an iron façade, and despite how much Sarah tries to hide behind it, the actor never walls us off from her emotional need.

As James, Robert Harte bustles into every corner of his character: the attentive companion, the second fiddle to Sarah, the lover who ranks irony a bit higher than romance. Harte is at his best when he lets the emotion of a scene sweep him away, as he does when recounting a moment of battlefield trauma, or when he becomes an expansive and potentially volatile drunk. At other times, he stays too close to the surface of Margulies’ witty dialogue. Then again, James’ main purpose is to show viewers another toll of war: a deadened soul.

Paul Ugalde plays Richard as a thoughtful, compassionate man who’s quietly happy to have forged a May-September romance that seems to have some staying power. Ugalde is graceful and wonderfully focused on stage, and his take on Richard as a peacemaker makes him a warm, conciliatory presence. What’s largely unexplored is Richard’s ability to exploit James and Sarah, and Ugalde gives us the tougher side of the character only when Richard makes a firm, and far-reaching, editorial decision.

Playing Mandy, Kari Buckley tackles a role that might defeat a lesser talent, for she must inhabit a character that the audience — like Sarah and James — is inclined to treat with contempt. Buckley immerses herself in the lovely purity of this raw, witless girl. One of the pleasures of the play is watching Mandy evolve even as she retains just the right degree of ditziness. She could have stopped at the easy punch lines, but Buckley probes and reveals Mandy’s heart.

Margulies never misses an opportunity to reveal the quiet contradictions in his characters. When Richard and Mandy cluster around a laptop to look at Sarah’s latest photos, they murmur in approval, flicking from picture to picture, 6000 miles from the battleground. They are reverent about the solemn subject matter but insatiable in their desire for more pictures.

Sarah tries to stay detached but cannot help peering in from behind them to check for a favorable response. Photo editor Richard craves the aesthetics of horror: He needs pictures for his magazine that will punch viewers in the gut. And Mandy’s gut is punched when she learns that a baby in one photo died despite the mother’s efforts to find help. Mandy confronts Sarah, James and Richard with the central question of a journalist’s responsibility to subjects, to viewers and to self-protection.

Mandy’s expression of revulsion takes courage, especially when the people who surround her take pride in their ability to be detached. James and Sarah’s journeys into war zones take courage, too, but, as they both admit, it’s exciting to find yourself alive when danger is all around you. Above all, what does it mean to bring back proof of atrocities when the viewer can do nothing to address them?

Neither Margulies nor Ramos offers any pat answers. As we watch these richly drawn characters who have much at stake, we can pause to examine how our own lives are affected by the news-making machine. And we can reflect on what it takes to build a strong, mature relationship. Both couples test their bonds to see how much closeness or distance they need, and their hard-won decisions are powerful to witness. It’s another kind of wartime, and no less powerful.