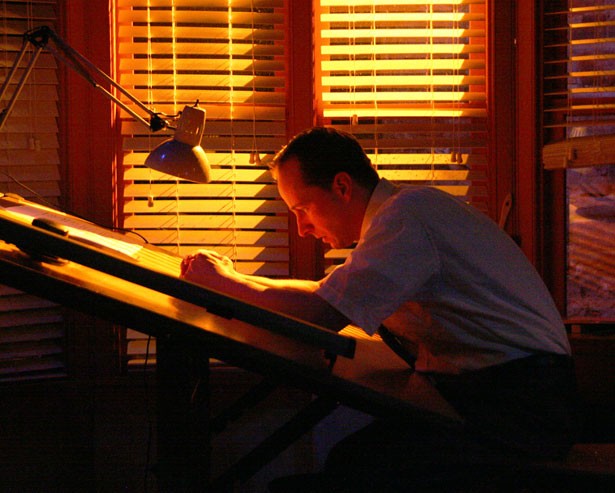 How well do we ever really know our parents? The pursuits and passions that filled their lives prior to parenthood seem irrelevant to the me-centered world of the child. When grown children try to learn more about the adults they have alternately loved, feared, respected and rebelled against, family baggage often clutters the path to understanding. It can be hard to imagine, for example, that Mom and Dad were once young, vibrant, impetuous and capable of being madly in love.

In Three Days of Rain, playwright Richard Greenberg asserts that we don't know the old folks at all. He uses a stark technique to illustrate his point, portraying two generations separately in two acts set 35 years apart. His sly twist: The same three actors take on both sets of roles. In the first act, they play thirtysomething New Yorkers who bemoan their parents' shortcomings; in the second, they are the 'rents themselves at roughly the same age. The Vermont Stage Company production reveled in the energy of Greenberg's characters and the razor cut of his language, as the trio of actors crafted six memorable performances.

The 1997 Three Days was a finalist for the Pulitzer Prize in Drama. A 2006 Broadway revival raised its profile, because Julia Roberts was cast - it marked her stage debut. Roberts' performance was widely panned, even though star-struck reviewers such as The New York Times' Ben Brantley couldn't stop raving about her cheekbones.

That a $20 million-per-picture movie star bombed in this play underscores its formidable acting challenge. Greenberg weaves and unravels a complicated web of emotional entanglements. Within each trio, siblings, friends, lovers and business partners lash and soothe each other verbally as only lifelong intimates can. The wordplay is challenging; following it is sometimes as tricky - and as stimulating - as tracking a Dennis Miller rant or Keith Olbermann commentary. Making it look effortless requires precise timing.

Act I opens as brother and sister Walker and Nan Janeway reunite before the will of their father, a famous architect, is read. Irritable and restless, Walker reflects on his father's artistic achievement and recalls bitter childhood memories with his "entirely sane" older sibling. Their now-institutionalized mother, Lina, is "like Zelda Fitzgerald's less stable sister," he notes. Father Ned was so silent that Walker remembers him as "Chaplinesque."

Ned secretly kept the old Manhattan loft where he lived with fellow architect and friend Theo Wexler, who died early in their business partnership. Walker discovers Ned's journal hidden under a mattress, and tries to decode its entries. He finds that his father's writings share the same cryptically flat affect that so frustrated the mercurial son. The first entry appears to be a mere weather report: "Three days of rain."

Theo's son, Pip, joins his childhood friends Nan and Walker at the apartment. When the estate settlement takes an unexpected turn, Walker becomes unhinged. Grudges and secrets boil to the surface, with Nan caught between the men as their uneasy brotherhood threatens to rupture. How Walker, Theo and Nan view their parents' history defines the tensions between them.

The past, of course, differs wildly from what the children picture with such certainty. In Act II, adults of 1995 morph into their parents in 1960. The actor who portrays a choleric Walker becomes the almost pathologically shy Ned. Straightlaced Nan becomes her free-spirited mother, Lina. Calm, self-assured Pip turns into the insecure, tyrannical Theo. The secrets are bigger, the passions grander, than the next generation comprehends. The audience comes to understand why pain and regret entwine the older generation's next three decades, and learns that a lot can happen during three days of rain.

Director Sara Lampert Hoover helped bring forth robust performances from her talented ensemble. Solid teamwork between the director and actors manifested in layers of gesture, expression and movement that reinforced the characters' complicated emotional histories with each other. Believable relationship dynamics powerfully fueled the drama: for example, Walker and Nan as siblings who both love and hate each other; and love triangles both fresh with possibility and fraught with conflict.

Greenberg creates all the parent/ child pairings as striking opposites. Todd Lawson portrayed Walker and Ned's polarities with verve and vigor. He showed that Walker's dark humor creates a center of humanity in the sometimes exasperatingly immature, angry man. At the same time, his Walker was jittery, frazzled and wide-eyed, fists balled into pockets, often leaning on his toes as if ready to jump down Nan or Pip's throat at the slightest provocation.

Lawson brilliantly inverted this body language to become the morbidly shy Ned, withdrawing from physical and verbal contact as if recoiling from a hot stove. His stutter crested and ebbed as Ned eventually begins to take risks.

As daughter Nan and mother Lina, Kathryn Blume sketched compelling portraits of the night-and-day pair. The female characters anchor both acts: In Act I, Nan mediates as the men's feud escalates; in Act II, Lina is the object of desire. Although Blume was not yet letter-perfect with all her dialogue in last Thursday's performance, she confidently owned both roles, crafting convincing chemistry as sister and lover in her characters' relationships.

Blume was especially engaging as Lina, depicting the seductive Southern girl without lapsing into cliché. While the staid Nan moved with self-imposed constriction, Blume's Lina flowed effervescently, in eager speech and belle-of-the-ball movement around the stage.

Tony Roach, as Pip and Theo, deftly painted the third filial duo. Roach played the easygoing Pip with relaxed joviality, maintaining broad-shouldered equanimity at the receiving end of Walker's bile. But when Pip reaches his limit, he snipes: "Being in a good mood is not the same thing as being a moron." Roach flashed Pip's testiness with low-key menace when he "accidentally" spills a secret that wounds Walker deeply.

As Theo, Roach made clear the twisted source of any dark roots for Pip. The partner whom the children thought of as stable turns out to have been tormented. Roach conveyed Theo's tempestuousness by stalking, brooding and then striking out with vicious unpredictability. Stormy weather is soothing by comparison, and a prolonged downpour provides a cocoon of sweet relief for Ned and Lina.

But the star of the scenic design was the play's big metaphor: the special effect of rain beating against four windows as the drama intensified. It never overpowered the action. But when the real meaning of Ned's seemingly banal meteorological journal entry is revealed, the rain became a soft reminder to question the steady drumbeat of judgment that we all maintain - whether we admit it or not - toward our parents. Compromise might have been sacrifice; a heart that seems empty might once have overflowed. By juxtaposing two generations who will never know each other's truth, Greenberg seems to make a silent plea for compassion and forgiveness.