Theater Review: 'The Turn of the Screw,' Lost Nation Theater 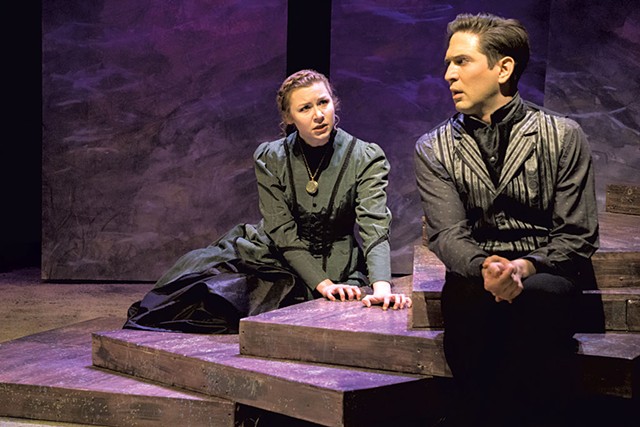 In adapting Henry James' short novel The Turn of the Screw for the stage, Jeffrey Hatcher makes the story a theatrical feat by telling it with only two actors. One plays the main character; the other transforms moment by moment into four others. Quick-change stunts usually drive comedy, but this is a tale that bodes evil from the first word and brooding shaft of light. It's a ghost story in which the ghosts may or may not be real; the shivers come from creepy characters more than supernatural doings.

In the Lost Nation Theater production, the actors are the centerpiece. Laura Michele Erle plays a sympathetic young governess with pure Victorian pluckiness. Christopher Scheer uses voice and movement to create a stuffy narrator, an aloof London bachelor, an aging housekeeper, and a young boy who's by turns angel and devil.

The show crackles when the two performers build scenes with perfect timing, working like musicians to dazzle with the rhythm of their exchanges. At first, these are short, rapid bursts, as the governess tries to learn what other characters are hiding. Then the story builds, driven by the intensity of the performers more than the circumstances of the plot.

A wealthy, mysterious bachelor has hired a young woman to care for his orphaned niece and nephew, 6-year-old Flora and 10-year-old Miles. In her first job as a governess, she arrives at a grand English country house now staffed only by a housekeeper. The children appear angelic yet bizarre. Flora stopped speaking some time ago. Miles has been expelled from boarding school for unspecified disgraceful behavior. But the governess expects to dispel any gloom with her optimistic belief that all the children need is love and protection.

She soon learns that the prior governess, Miss Jessel, had an illicit affair with the valet, one Peter Quint. Both are now dead: Jessel by drowning in the estate's lake and Quint by a fall from the house's tower. The governess concludes that the ghosts of Jessel and Quint are causing the children's odd behavior. After all, she's started to see those ghosts herself. And she believes they're an imminent threat to the children.

Because a play puts real people onstage in plain view, it's hard to truly spook an audience. Hatcher's adaptation doesn't require true stage tricks because his ghosts are never visible to the audience, only described by the governess. Since the real tension in the James novella is the reader's uncertainty about whether the governess sees ghosts or imagines demons that drive her own psychic turmoil, a director has to make both possibilities equally strong.

Director Kim Allen Bent presents the show on a nearly bare stage, with a moody, abstract backdrop created by scenic designer Donna Stafford. Bent and lighting designer David Schraffenberger are fond of isolating the governess in near silhouette while the other characters swoop in around her. Between Hatcher's two-actor ploy and Bent's inclination to place the main character in monumental stillness, it's very much the governess against the world. The audience can only doubt her sanity if she begins to herself.

From the moment she enters, Erle is so sympathetic that it's tough to see anything fraying inside. Bent keeps the mood ominous, but with nothing to go bump in the night, the governess can only show she's ill at ease, as unfocused as the haze that wafts over the set.

Hatcher's adaptation unfolds over a single week. Stepping up the pace of the novella suits theater's compression of time, but the governess unravels so rapidly it borders on inexplicable. While James could keep the reader guessing about whether the governess saw or created her own ghosts, Hatcher hands the audience a simpler problem: How long is this governess going to last?

Erle and Scheer succeed at summoning a sense of evil and making Victorian notions of sex and death seem more compelling than prudish. Still, despite Scheer's physical gift for presenting a curious child, Miles is simply never in any peril. Because he doesn't show fear, the audience can't feel it either, and the governess has no menace to battle, internal or external.

Erle avoids melodrama and skirts the edge of hysteria rather than wringing out superficial emotion. The play gives her few actions to indicate a descent toward madness, but Erle is a fascinating blank canvas, particularly with the show's bold lighting effects playing on her. Her fears for the children seem more noble than misdirected, but if she doesn't show much dark side, she's consistently tuned to a clear Victorian pitch.

Scheer makes finger-snap physical transitions that are impressive to watch. He dusts the housekeeper with a light Irish accent, gives the narrator a grim intonation and the uncle a faintly slimy one, and foregoes a cloying child voice for a small, hesitant one. These character transformations happen without costume changes, often within the completion of a walking stride.

The play flies by without intermission in 75 minutes. That's plenty of time to enjoy the splendid costumes by Charis Churchill and razor-sharp acting by Erle and Scheer. But it's not long enough to create the psychological ambiguity of the original book. For a story to scare us, it must scare the people in it first. In this show, evil is an abstraction, but the acting and stylish production are wonderfully real.

The original print version of this article was headlined "GhostedStory | Theater review: The Turn of the Screw, Lost Nation Theater"