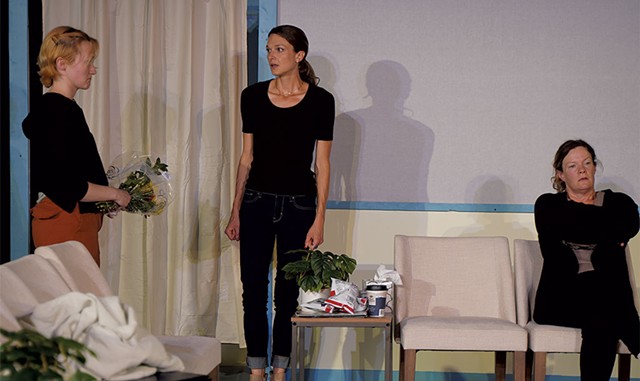 Behind an upstage curtain is the ICU bed of the unseen Robert. He's a successful writer, and the people most invested in his life have to share the waiting room while he lies near death. Crossing paths in the impersonal room are his 16-year-old daughter, Sasha; her mother and Robert's ex-wife, Rachel; and his girlfriend of five years, Kathryn.

It's a promising dramatic vortex, as each woman views Robert differently and finds it difficult to honor the others' connections with him. Kathryn wants her relationship with him to be recognized, but it can never match the length and significance of Rachel's. Sasha pinballs between blaming Kathryn for her father's illness and trying to convince her mother to provide for Kathryn after Robert's death. And Rachel broods over the scars Robert has left on her and her daughter.

Though Robert seems to be an alcoholic, Cole scrupulously avoids the term and doesn't tell a story about the always unfinished business of guilt and self-preservation that an alcoholic stirs in those who love him. Instead, she introduces small conflicts to keep the characters at odds with each other. The performances are what matter here, as Rachel and Kathryn construct veritable force fields around themselves to maintain their distance while Sasha lunges from hope to despair to anger.

Langdon Spillane plays Kathryn with a deep vein of vulnerability that she hides with strict composure and a proud set to her jaw. She uses an icy stillness to hold her ground. When Kathryn enters, she immediately begins calculating the space in the room to allow the full psychological and physical distance from Rachel and Sasha. Each woman is slightly jealous of the others, and Langdon Spillane plays her resentment as throttled patience, starting to fray.

Chris Caswell, as Rachel, can stare down Kathryn with an imperial gaze or glance at her daughter with tight lips that say, "Stop right there." Caswell has a genius for allowing emotions to roll over her, one by one, so we can see them register. When Rachel takes command, Caswell's piercing blue eyes convey certainty. But with an undercurrent of desperation, Caswell also shows the character's power isn't a desire to dominate but a need to protect her daughter.

Katelyn Shaw has the difficult job of portraying a character younger than herself. Sasha is written with a teenager's apocalyptic sense of right and wrong, but Shaw is too clearly an adult to make overwrought pronouncements convincingly youthful. Indeed, she seems at times a little nutty in her enthusiasms. But Shaw excels at showing the character's woundedness, leaving Rachel and Kathryn unnerved. Above all, Shaw startles by shifting allegiances suddenly within the triangle of characters.

These three performances crackle like a mesmerizing fire. Some of the playwright's sparks pop nicely, too, and Thursday's preview audience remained intently focused. But a play is not a steadily glowing fire; it has to rise and fall.

Cole tries to produce catharsis with a fit of temper by Sasha, but the infantile action doesn't release anything. Yelling is not a shortcut to emotional depth — there is no shortcut. And a hospital waiting room is charged with a far different kind of intensity. Elegant as the performances are, the play keeps them stuck at one pitch.

Twice, the script gets near a conflict that the three women might struggle to resolve. Who will get control of Robert's money and literary legacy? Will everyone agree when life support should be discontinued? But the playwright whisks away each problem before the characters have to get too messy fighting over it. In the end, no ties bind these three.

Director Dominic Spillane presents the play on a floor-level three-quarter thrust stage. Wrapping an audience around the performers, and at such close range that we see past the actors to notice each other, is always risky. The light spill from pole-mounted lighting instruments is no help, and rather than immersing us in events, the conditions constantly remind us of the theatrical boundary.

The toughest constraint of staging for three separate banks of spectators is that the actors must move constantly so no viewer is stuck watching the back of a character's head. Some stories can be told well with frequent movement, but if ever there was a place where people would stay still, the deathbed waiting room is it. Yet Spillane has no choice but to keep the actors in motion, too often dissolving the tension that could build between people with no escape from each other.

The lighting design by Joe Sanguinetti is effective, especially in the crepuscular scene changes that indicate the passage of time. Sound designer Otto Muller introduces the faintest trace of beeping hospital machinery, and contributes a tribal beat to Sasha's outburst. The otherworldly rhythm almost rescues the action by adding grandeur, but a departure into musically scored ritual doesn't fit the show's realism.

When the play ends, the characters are unchanged, but the audience has still witnessed actors firmly staking out their characters. The production is a theater experience but not a theatrical story. Without a satisfying ending or propulsive events, the play never climbs higher than repeating its circumstances. Still, the actors fascinate from start to finish. The waiting in that waiting room is what counts.

The Ties That Bind by Tamar Cole, directed by Dominic Spillane, produced by Dirt Road Theater. Through September 17: Thursday through Saturday, 7:30 p.m.; and Saturday, 2 p.m., at the First Universalist Church in Barre. $20. dirtroadtheater.com

The original print version of this article was headlined "Waiting It Out | Theater review: The Ties That Bind, Dirt Road Theater"