Theater Review: 'The Taming of the Shrew,' Vermont Shakespeare Festival 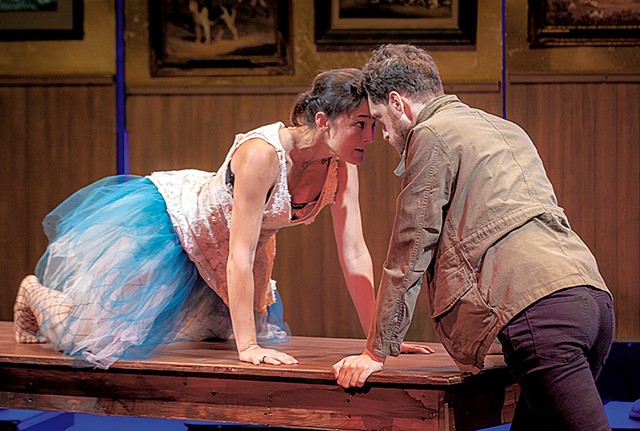 A contemporary audience comes to The Taming of the Shrew virtually daring the play not to offend. The title alone infuriates, with its pejorative category for women and suggestion that there's a triumph to be found in taming them. The only reason for staging it, the thinking goes, is to keep William Shakespeare on his artistic pedestal and find some clever twist to justify the characters or apologize for the conclusion.

Vermont Shakespeare Festival takes the bolder step of exulting in two characters who thrive on confrontation. Equal in intensity, unequal in control, they fascinate each other and mesmerize audiences as well. Codirectors Jena Necrason and John Nagle build viewers a pillow fort of laughs from which to watch. The jokes tumble out so fast and furious that it takes work to take offense.

This production playfully stirs old and new together, letting characters travel by both motorcycle and horse, and staging Petruchio's arrival with an obligatory selfie. Contemporary clothes, including Kate's leather dress and Petruchio's hipster ripped skinny jeans, give their power a style. They're the cool kids, and they're on a collision course.

The story: Baptista of Padua has two marriageable daughters. Bianca, the younger of the two, is demure; Kate is famously unpleasant, picking fights with anyone, including her blameless sister. Suitors Gremio and Hortensio have already lined up for Bianca, but Baptista won't allow Bianca to marry until his elder daughter is wed. Marriage is a market in this play, and Kate's temper has made her unsellable.

Bianca attracts yet another potential husband when young Lucentio arrives from Pisa and falls for her at a glance. Lucentio is a better match than old Gremio and unrefined Hortensio, and he has enough money to satisfy Baptista. But Lucentio wants to win Bianca's love, so he disguises himself as a tutor to gain her company. He'll have his hands full with wooing, so he appoints his servant, Tranio, to impersonate him and conduct marriage negotiations with Baptista.

Nothing's going to budge until Kate has a husband, but a willing prospect arrives from Verona in the form of Petruchio, keen to wed the richest bride he can find. Kate qualifies, especially because Bianca's suitors will underwrite any courtship that gets her sister to the altar. Petruchio doesn't even need to meet Kate; the terms are enough. But when he does, the two commence sparring, and this production makes the power struggle riotous in wit and action.

All of the play's events turn on deceit. Lucentio employs disguises, lies, a fake father and even elopement to marry Bianca. These tactics are accepted, and funny, because love animates them. Petruchio's control of Kate arises from dishonesty, as well. He deprives her of food, claiming that what's served isn't worthy of her. And he takes over the power to declare what's true, forcing her to agree to absurd statements, such as asserting that the sun is the moon.

Petruchio gains control by bending reality. It's a cruel and effective technique, but in this production, Petruchio takes no pleasure in the damage he's doing. Rather, he seems to make it up as he goes along, fighting for his toehold. Kate's defiance is played as a rebellious curiosity about the world; only self-preservation forces her capitulation.

The play ends with Kate's speech about women owing men obedience. Onstage, Lauren Pisano creates a Kate of fire — the kind whose flame should never be quenched. The final and perfect surprise of this staging is how Pisano gives the words warmth, for she shows Kate discovering love for her father, sister and husband. It's Petruchio who's stunned — we might even say tamed — by her words. Pisano makes the speech about what comes next, not about being vanquished.

Dean Linnard, as Petruchio, carves ideas out of air and makes the words ring with dazzling clarity. He unlocks Shakespeare's language with bold movement that is riveting in its economy. Whether landing a joke or stewing as the butt of one, Linnard lifts every scene with his energy. And his Petruchio is a master of manspreading.

Paul Ugalde gives Baptista a banker's heart. Concluding marriage negotiations with Petruchio, he notes the suitor still needs to win Kate's love, waits a beat, then snorts, "Nah!" as they both high-five a business deal. As Bianca, Julia Sioss flutters nicely when wooed; as the servant Biondella, she wheels around on a scooter with skater-punk headphones. Sarah Mell, as the too-brilliant Tranio, flourishes with the chance to wear a sharp suit impersonating his master.

Nick Piacente plays Petruchio's ever-present servant, Grumio, and becomes a lively presence capable of physical feats and comic takes. He sometimes acts out Petruchio's speeches with sound effects or punctuates the action like a witty subtitle. It's never overdone and is always hilarious.

Nine performers fill 20 roles, and their sheer precision of movement is a pleasure to watch. The directors have a genius for clarifying a character's intention with movement that turns abstract emotion into action. When Kate is deprived of food, she climbs up on the long banquet table and claws along on hands and knees toward a vanishing tablecloth that Grumio pulls away, a foot at a time. She reaches the end of the table to come forehead to forehead with Petruchio. Pow.

Nagle and Necrason return to a fundamental truth: Comedy is surprise. That means a rug can be pulled out from under the viewer as well as a character. For anyone sure that there's only one way to see the balance of power between men and women, this show will shatter sanctimony with humor. It's still true that a defiant woman is a crucial symbol today. And misogyny doesn't win in this production; comedy does.

The original print version of this article was headlined "Control Shift"