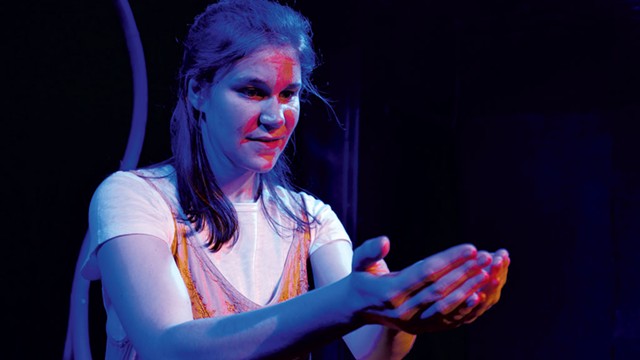 In The Syringa Tree, a one-woman show playing at Lost Nation Theater, Courtney Wood whirls onto the stage and rivets the audience's attention from her first remarks: a sweet but silly theory of fortune-telling by one's fingernails.

A solo show often rests on virtuosity alone, without two or more actors to face each other to realize theater's potential for conflict. The joy here is watching Wood create true exchanges between multiple characters. The confrontations are stylized because a single performer embodies them, but they're nonetheless as powerful as multiple actors could make them.

Wood plays 24 roles and conjures up as many as five people onstage simultaneously, distinguishing each with pinpoint physical and vocal characteristics. Her pliability is intoxicating in itself, but what mesmerizes is her ability to capture the tension in each moment. The play's circumstances contribute some suspense, but Wood intensifies the mood to give the audience a constant concern for the outcome.

The story is simple. Elizabeth, a white English girl, grows up in South Africa in the 1960s, during the darkest days of apartheid. Most of the play occurs when she's a curious and active 6-year-old whose nanny, Salamina, affectionately calls her "monkey."

Wood plays all the parts, but every character is seen through Elizabeth's point of view. Her neighbor is an Afrikaans family, her nanny a Xhosa raising a child of her own who becomes a virtual sister to Elizabeth. Her father is a doctor, her mother a fretful housewife. Friends and workers represent three Bantu ethnic tribes, while a Dutch Reformed minister brings his notion of white privilege.

On an uncluttered stage, a tree is indicated by a handmade swing hanging from stylized branches. Beyond this abstract set are the townships where apartheid is playing out. Elizabeth runs, dances and lunges through the space with all the abandon of a spirited kid eager to learn about the world. And she's engaging enough to make the audience want to learn with her.

The primary storyline involves the danger faced by Moliseng, the daughter of Elizabeth's nanny, who lacks the papers she needs to avoid being taken from her mother by the police. The play is more a stew of characters than stories, but meeting them through Elizabeth's eyes is continually fascinating.

In making her protagonist 6 years old, playwright Pamela Gien has seized upon a powerful way to shatter apartheid. A child fundamentally can't understand it, and that's because it makes no sense. Elizabeth loves Salamina and likes to play with Moliseng by "covering her with kisses." The ethnic source of shame and discomfort she sees in adults is a puzzle to her.

Though Elizabeth has been taught that there's something to fear, her naïveté leaves her oblivious to some threats and foolishly concerned with what's actually benign. As we watch her explain the world to us, the play is designed to make the audience yearn to protect her, and to fear that forces far too large and inimical will harm her and those she loves.

The context is serious, but much of the play is humorous. Gien's script is a tangy mix of sweet and sour, and Wood's performance is so openhearted that her characters are easy to love and laugh with. A 6-year-old protagonist necessarily crosses into cuteness, but the doses of treacle are mercifully small.

In the second act, as Elizabeth ages through school and motherhood, the earlier taut suspense of wondering how a young child will cope with loss shifts to a more abstract look at cultural change.

Wood brings powerful gifts to a role she originally performed as her college senior project in 2014 and last year at Lost Nation in a production lacking the technical finesse of the current version. Her facility with accents and a lithe physicality helps her define the characters. Wood captures age, personality, race, gender and stature with clear gestures that help us recognize a mother who regularly brings her right hand up to her cheek, a father who crosses his arms and a large pregnant woman with an unruly laugh, to pick a few.

Kim Allen Bent's direction uses space and movement to make transitions, but he keeps the focus on the actor's ability to make each moment new. Wood is wonderfully capable of revealing surprises that happen to both characters and audience. When her young Elizabeth and Moliseng twirl and leap, Wood conveys such abandon that she carries the viewer into the unknown.

The Syringa Tree won the Obie Award for best play in 2001 and is solidly presented in Lost Nation's production. Dan Corrigan's scenic design is a simple construction that evokes the curving trunk of a tree and a childhood swing. The set gives Wood a blank canvas that she fills with two dozen people.

Lighting design by Thomas Gunn shows changes of mood and time. Melissa Troxler's sound design is largely effective but sometimes needlessly literal, adding outside voices or sound effects when the text alone could tell the story. The music, researched by Bennett Shapiro and Kathleen Keenan, opens a window into the popular and ethnic sounds of South Africa.

The play moves apartheid from a cultural abstraction to the personal struggles of individuals, especially ones too young to understand racial segregation but fully open to the emotions it stirs. Because Elizabeth observes without commenting, Gien's play never feels heavy-handed, yet it never shies away from a serious subject. The Syringa Tree doesn't moralize; it reveals.

Wood is so physically and vocally agile that viewers have difficulty taking their eyes off her. But it's her emotional range that distinguishes this performance, and her effulgent presence that leaves the viewer with an image of hope amid cultural despair.

The original print version of this article was headlined "Moving Past"