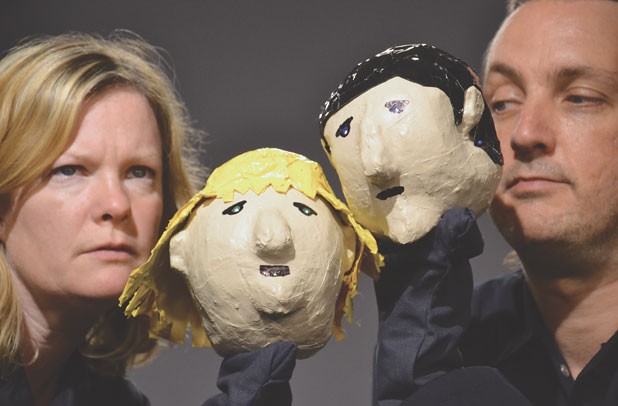 Watching the premiere of Chris Caswell’s new play The Puppet Shoppe is like solving a puzzle. There are moments of great mental stimulation, maybe a little frustration and finally a sense of immersion in another world. Caswell uses quirky storytelling via live (human) action and puppetry to tell the bleak tale of a world ruled by the authoritarian Data Collection Project, a government agency that is confiscating all books.

One last book is still at large. It appears in a forlorn puppet shop, where proprietors Boris (G. Richard Ames) and Anya (Caswell) must decide what to do with it, and whether they can trust each other with an object that seems to be both treasure and time bomb. Caswell’s story doesn’t follow a straight, suspenseful line but instead meanders to explore the theatrical possibilities of combining actors and puppets to suggest layers of meaning.

Puppets have numerous connotations, and Caswell lets her script hover over most of them. Are these puppets soulless zombies? The vicious Punch and Judy? Are they slaves to the hands pulling their strings, projections of the actors or something new? At times, Caswell’s puppets represent the essence of storytelling: They come to life to embody a book being read. Boris and Anya have self-referential puppet counterparts, who themselves use tiny puppets to tell stories; it’s like a mind-bending hall of mirrors. There is no settled puppet metaphor, and there doesn’t have to be, but the audience needs to recalibrate constantly to interpret how the puppets are intended.

This shifting approach to narrative conventions is invigorating if you surrender to it, but it can also be unsettling when, try as you might, you can’t locate the overarching symbolism. Director Jordan Gullikson stages The Puppet Shoppe like a juggler keeping the balls in the air. He asks the audience to adopt a juggler’s concentration, too — just revel in what’s spinning before your eyes and try to piece it all together when it’s over.

Tales of dystopia work by amplifying a problem until it reaches loathsome proportions, so the author can show us where we’re headed if we don’t change. Playwright Caswell’s hyperbolic images get a little confused — books are the government’s target here, but the play ignores the internet, today’s prime flow of information. Either the web is already shut down, or our dusty future lacks electricity; in any case, Caswell fastens on books as physical artifacts. But is it books the government is after, or the ideas in them? Ultimately, Caswell counts on our well-honed response to authoritarianism. She’s successful in creating a novel presentation of oppression, but less so in building a story arc from it.

Caswell’s plot has some leaks she may patch in a future draft, so fretting over them here only distracts from the theatrical moments she and Gullikson succeed in producing. But one big structural question remains. The play ends with no change to or by the characters, so it’s missing the conclusion we long to invest in, not to mention the good/evil polarity suggested by the fairy-tale qualities of the piece. And if that’s the point — that an authoritarian force has eliminated stories with beginnings, middles and ends — we need to see the subversive value of the stories as much as the collapse of storytelling.

The production is a cascade of fascinating theatrical effects. The play begins with a ventriloquist’s dummy giving the curtain speech and meeting a nasty fate — one that theatergoers might secretly wish on all those who dispense such preliminaries. There’s an intriguingly staged street scene in which puppets whisper and skulk alongside humans. It’s all gesture and body language, human and puppet. Boris and Anya each tell a story about their past through puppets with so many criss-crosses between the actors and within the puppet corps de ballet that the audience feels a delicious disorientation.

Caswell and Ames are skillful puppeteers and give their puppet characters entertaining vocal distinctions. The actors are usually working with one or more layers of puppet artifice, and their dexterity in accomplishing it all is magnificent to watch.

To make the future world sufficiently grim, Caswell’s script calls for an end to eye contact. As a description of misery, it’s perfect. As a requirement in a stage play, it’s extremely problematic. Caswell and Ames perform with a mannered detachment that invests the production with appropriate oddness, but this artifice sometimes feels like a drop in energy; at best it makes the relationship between Boris and Anya so ambiguous that we give up trying to understand it.

Both actors are powerful in their commitment to each moment onstage. Ames gives Boris an off-kilter curiosity combined with dread — he’s like a young child who still wants to play but knows he has to follow grown-up rules. Caswell’s Anya is so guarded that we long for something either very good or very awful to happen to her, just to puncture her shell. She maintains a constant, impressive tension that’s more real than the circumstances of the plot alone justify. It’s not surprising Caswell would write a role for herself that takes advantage of one of her great acting strengths: her riveting ability to shift from character to character — and puppet to puppet — with mercurial ease.

The set design, by Todd Townsend, enhances the feeling of mystery and innovative storytelling. With packed shelves of puppets and a dusty glass window, Townsend conveys a strong sense of the puppet shop as a safe but weird little warren, then introduces quick-change elements, such as window panels on wheels with shades that roll down to provide instant backdrops.

Catherine Alston costumes the live actors in lumpenproletariat jumpsuits, cleverly embellished with breast pocket QR codes. When some puppets show up in the same suits, the tactic is even funnier.

The show’s sound design includes original music by Johnnie Day Durand. It hits the right atmospheric notes and helps maintain mood through numerous quick set changes. But when used without pause in the last third of the show, it approaches emotionally manipulative film scoring. The great sound triumph is the well-chosen, well-timed aural accents that make the integration of live action and puppeteering magical. The live-action characters are as unreal as the puppets when unseen hands punctuate their lives with sound effects. Very cool.

The puppets, designed by Kevin Christopher, Meghan Dewald, Dani Bohnke and Catherine Alston, are created in a variety of media. Watching puppets pop up in different sizes, methods of operation and media makes us see the very use of puppets as an impetuous means of communication, adding real urgency to the story.

As author, Caswell has built a play with unfamiliar and exhilarating techniques for storytelling. She and Gullikson take risks to bring this puppet-human world to life, and if the plot stumbles a bit, it’s still thoroughly engaging. Seeing new local theater work like this will convince you that Burlington is well poised to resist the very totalitarian forces this play conjures.

"The Puppet Shoppe" by Chris Caswell, directed by Jordan Gullikson, produced by Saints & Poets Production Company, Thursday through Saturday, September 19 to 21, 7:30 p.m.; Saturday and Sunday, September 21 and 22, 2 p.m. at the Off Center for the Dramatic Arts, Burlington. $15. For audiences 14 and older. saintsandpoetsproductions.org

The original print version of this article was headlined "Information Agents"