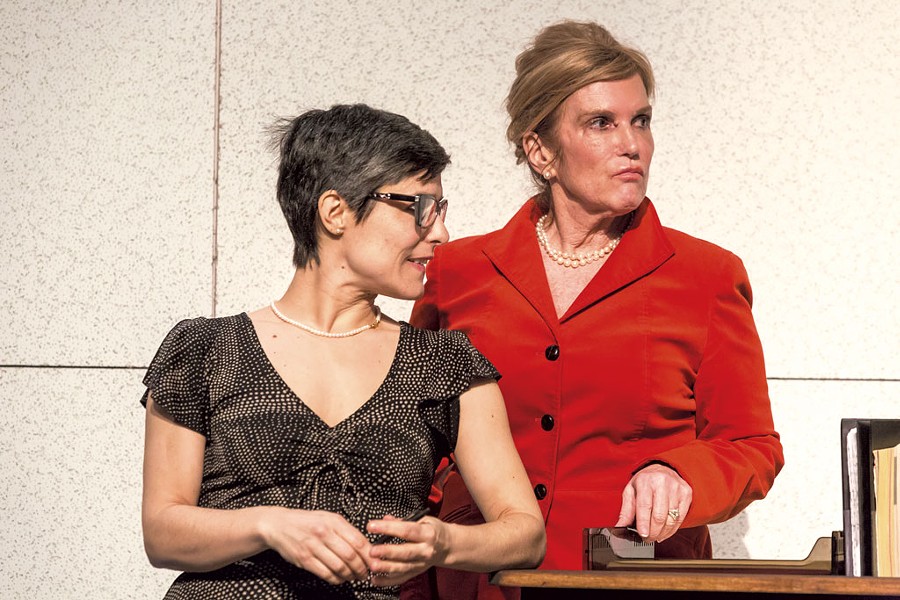 Playwright Adam Bock's two plays The Receptionist and The Thugs were first produced by Manhattan Theatre Club in 2007 and Soho Rep in 2006, respectively. Back then, "The Office" had just become a phenomenon on American television, and the film Office Space had been established as a cult favorite for nearly a decade. It might be tempting to conflate The Office Plays with such similarly themed works. But, as presented this month by Moxie Productions and Marabo Productions, and directed by Monica Callan, Bock's plays are neither mockumentary nor satire. Though they may be humorous and absurd, they venture into the darkly surreal territory of a thriller.

Bock's plays, each approximately an hour and a half long, have an "everyday life" quality and include a cast of characters that wouldn't be out of place in any office, real or on-screen. The first piece challenges the audience to sympathize with a receptionist whose comfortable position may involve some chilling compromises. In the second, we observe what a group of temporary workers might like to forget to return to a dreaded but familiar routine.

The Thugs is the stronger of the two pieces in this production, and it is also the play for which Bock won an Obie — or Off-Broadway Theater — Award. The Receptionist is a tricky work, dependent on a strong titular lead actor to carry the show with charisma. Her challenge is taking the audience through the kind of quotidian gossip that can seem meandering unless in expert hands.

On Saturday, The Receptionist got off to a rocky start. Audience members entered just as the play began, interrupting the enigmatic opening monologue by Larry Connelly, as businessman Mr. Raymond. Still, his ominous final words — "Everything is eating something" — effectively foreshadowed the darkness to come.

Cue Mary Scripps as Beverly, the receptionist, the heart and moral center of the play. Her costuming by Nica Allen is perfection, from bouffant hair twist to red peplum jacket to black kitten heels. Instantly recognizable, Scripps' Beverly is like a caramel, soft and a little too sweet. She gives a friend advice over the phone, sounding passively indignant over her poor dating choices, all the while fielding calls for the vaguely named "Northeast Office." Beverly also counsels love-scorned coworker Lorraine (Emer Feeney) and guards the gates to her employer's inner offices.

The pace of the play's first act was a bit slow. Its best action follows the arrival of the suave Mr. Dart (Adam Cunningham), who says he's from Central Office and wants to see the absent Mr. Raymond. The stage comes alive with absurdity and tension as Beverly is forced to exercise control over her territory.

Lorraine embarks on a flirtation with Dart, which in Feeney's capable hands read as desperate as it was strange. This aging Lothario is a married man and palpably creepy. His attention seems more lion-sizing-up-gazelle than lovebird. There's a subtext of tension: Is Mr. Dart really from Central Office? And what does he want from Mr. Raymond?

Set designer Peter Holm cleverly used acoustic tile to create the backdrop, which appropriately resembles a generic office. The set is complete, from restroom signs and elevator to the tiny detail of a backscratcher in the pen cup. Colors are muted gray and off-white, with the exception of the warm-toned reception desk, the focal point of the stage.

Act two takes a disquieting turn, like an episode of "The Twilight Zone," as we learn just what Mr. Raymond does at the Northeast Office. Bock employs a coded conversation between Mr. Raymond and Lorraine to convey the inescapable implications. Beverly tries not to overhear, hoping her busy work will grant her the emotional distance she needs to maintain necessary denial.

The final moment of the play, which we won't reveal here, returns full circle to the opening monologue. Puzzling at the beginning — in contrast to the happy little bubble the receptionist inhabits — Mr. Raymond's dark words now make perfect sense. In The Receptionist, there are consequences for even a little complicity with an evil and seemingly omnipresent authority.

In The Thugs, lights come up on a backdrop of file boxes stacked to the ceiling. Plastic tables and chairs lend an authentic air of impermanence and cheapness to the office space used by the temporary legal coders in the play. From the start, the soundscape designed by Johnnie Day Durand drives the audience through Bock's world.

We hear birds chirping as Emer Feeney — this time playing the delightfully twitchy temp Mercedes — is the first to arrive at the office. Elaine (Tracey Girdich) joins her, and the scene that follows is tense, filled with passive-aggressive rips and utterly riveting.

Bock is considered a master of the style of realistic dialogue in which characters rarely complete a sentence. Under Callan's direction, the entire ensemble does a fantastic job with the text, layering the conversations and using repetitive phrases musically.

Focus and timing are everything in this tightly wound, character-driven dark comedy, which does not have a traditional ending resolution. It's simply a day in the petty, paranoid lives of this particular temp pool.

Every office has a pecking order, and at the top in The Thugs is Diane, played with hateful glee by Pamela Formica. One step down and engaged in a constant power struggle are Elaine, who's crazy and vicious, and the paranoid Mercedes. Bart (Aaron Reil) and Daphne (Haley Behn) are well played as the sort of lost young people who seem to fall passively into this type of underemployment.

Then there's the new temp, Chantal (Hannah Mooney); and the quiet temp, Mary (played last Saturday by Callan, filling in for Genevra MacPhail). Callan's heartbreaking use of the fourth wall, as she gazes out over the audience beyond the confines of her drab little world, serves as a counterpoint to the real and imagined tension building onstage.

The temps' talk turns macabre as they discuss whether someone has died on the building's 16th floor, or perhaps the fourth. Diane, with the authority of two years at the unnamed legal firm, goads them to work and tries to steer them away from possible dangers on those other floors. When she's away, the temps flirt with the idea of investigating, and confess to one another that they've made dangerous compromises in their personal lives.

All the while, Durand's soundscape paces the action with what sounds like a ticking clock, layered with rain, thunder and other mysterious noises. The temps do the drudge work on a case Elaine will describe in a percussive climax as "dumb lawyers saying dumb things to other dumb lawyers about dumb things stupid people did."

The action thickens when Diane returns to the office and takes a decisive action in regard to a rival; and Joey (Nick Wilson), an abusive boyfriend, surprises Daphne at work. The day builds to a crescendo of light, sound and dialogue, as the group's anxieties reach fever pitch. If the temps' worst nightmares turn out to be true, will they confront them? Or will they refuse to deal with any unpleasant reality, as they have so far, and simply return to work?

Bock's plays ask the question: What will it take to break us out of our comfort zones and make us take action for ourselves or others?

All in all, The Office Plays make for good theater. At three hours long, it's a commitment, but audience members who slipped out at intermission on Saturday may be sorry to hear what they missed.

The original print version of this article was headlined "Working Parts"