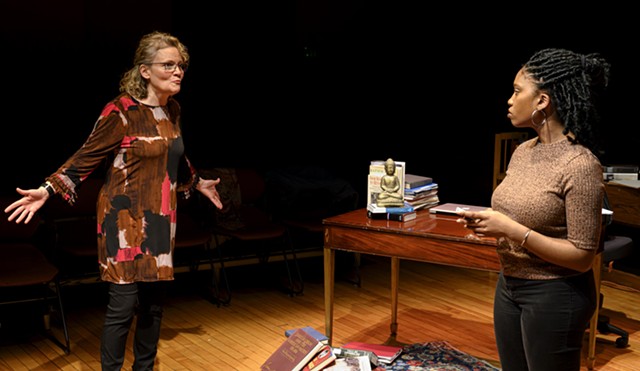 The trick to watching Eleanor Burgess’ provocative play The Niceties is not taking sides. Viewers of the Middlebury Acting Company production, which runs this weekend only, may be tempted to decide who’s right and who’s wrong, but the two women in this tense conflict are equally right. And each is equally frustrated that she isn’t heard even as she refuses to listen herself. They’re battling about history, discrimination and power in 2016, when truth itself is a personal choice.

The setting is a professor’s office at an elite northeastern university, which could easily be Middlebury College but was probably inspired by Yale University, where Burgess studied history. A Black student meets her white professor to discuss the student’s research paper on the American Revolution.
Janine, the professor, has made a career of studying why revolutions succeed or fail. Zoe, the student, has a theory of her own — the American Revolution succeeded only because slaves did not revolt and radicalize the conflict. White people ignored the real injustice and tackled only moderate political goals, so the revolution was accomplished without infighting. 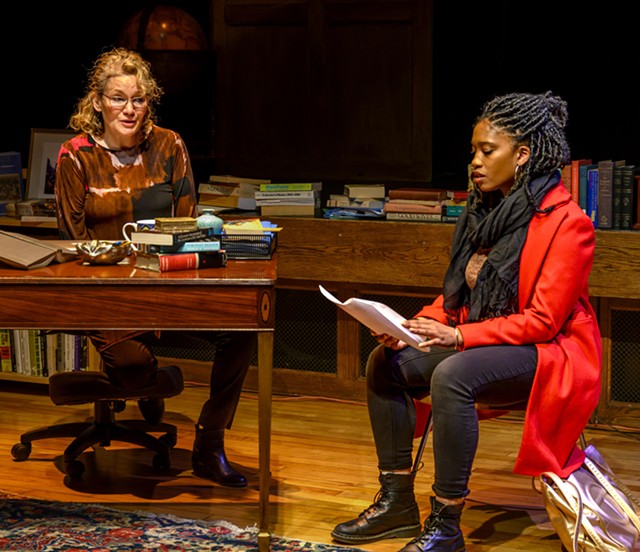 Zoe’s idea is intriguing, but she hasn’t substantiated her thesis with research. Janine does what she believes a teacher should do and presses her student to work harder, while dismissing Zoe’s conjecture and her casual online research. Zoe does what she believes an enlightened young Black woman should do and challenges Janine’s biases about history, especially her admiration for the enslaver George Washington.

It doesn’t take long for what started as simple questions about historical research to expand into a conflict about which people have the power to define the truths of history. Burgess shrewdly gives both characters direct experience of discrimination, letting them differ in the lessons they draw from it.

Janine’s lower-class family emigrated from Poland to escape communist oppression; her mother was a cleaning lady in wealthy Westchester, N.Y., where Zoe grew up. A feminist and a lesbian, Janine watched firsthand the advancement of gay rights. Zoe is a political activist feeling pressure to change the future. She finds past progress no comfort as she absorbs how long Black people have waited for American ideals to apply to them.

The central conflict of the play is as much generational as it is racial. Janine teaches the way she was taught, while Zoe expects an online link to carry the rigor of a footnote. Zoe is called to front-line activism; Janine advises the U.S. State Department and basks in expertise.

They see history differently, too. Janine is well aware that history carries the bias of those whose observations it records, but she believes that scholarship requires proof, not surmise, and that events should be seen in the context of past norms. For Zoe, history can unleash trauma when it excuses such things as the huge moral lapse of the founding fathers’ owning slaves while declaring that all men are created equal. For both of them, who gets to tell history reinforces power.

And so these two well-matched opponents battle for that power. Each character wins one skirmish, then loses the next, but it is Janine who gravely underestimates Zoe. Traditional dynamics of power, such as age over youth, white over Black and teacher over student, are upended. Most tellingly, although these characters have consistently admirable ideas, they are always at their worst when they grab at power itself. The exhilarating dialogue makes the play electric from the start, but a show like this depends on strong acting to give the battle of ideas personal stakes.

Karen Lefkoe, as Janine, and Kimmy Gordon, as Zoe, offer gripping performances. They let the script’s humor and wit ring out but never trivialize the play’s challenging questions. Lefkoe gives Janine a casual earnestness that’s the perfect veneer to encase white privilege and keep Janine herself oblivious to it. Gordon simmers a good, long while, then finally, acutely, takes aim.

Director Margo Whitcomb stages the show on the floor of Middlebury’s Town Hall Theater, with the audience seated on three sides. With no proscenium to raise the characters above us, we look down, as if observing them with scientific curiosity.

To accommodate viewers at three points of the compass, Whitcomb must keep the characters moving and often far apart. This is strong blocking when a character pontificates, but we see little of the characters directly interacting.

Whitcomb’s decision to stage the show in the round diminishes the connection between the characters and emphasizes the razor-sharp text over the performances. The power struggle plays out with little physical engagement, often with one performer speaking more to the room than to the other character.

The script is a fountain of wordplay, and the characters use ideas as weapons — and to stay in control. This production underlines that control, but it doesn’t explore the toll the battle takes.

At Thursday’s performance, the audience gasped a few times at the heat and light the characters gave off. The Black student and the white professor are both right, both noble, both alert to social struggle and inequity. And both are frustrated with the other, so much so that each seizes the particular kind of power to which she can lay claim. That’s when they’re at their ugliest, when their ideas no longer justify their self-interest.

The play’s title is ironic — niceties are not observed today. The setting is the spring of 2016, and both characters assume Hillary Clinton will be our next president. The audience’s laughter at that expectation is a reminder of how little we can understand of history while we’re in it.

Piercing in its accurate depiction of today’s contentiousness, The Niceties may become a time capsule, preserving the current political tone. One wonders if the play will eventually be seen as a comedy indicting this age or a forecast of a polarized political tragedy. Right now, it lays bare what’s at stake as Americans confront their history.

In this play, the reckoning occurs without empathy or connection. The object lesson is chilling.