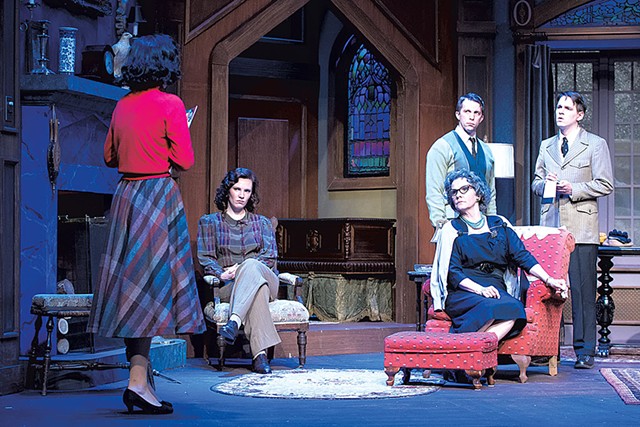 In a murder mystery, characters must assess each other with the right balance of suspicion and trust. So do audience members trying to solve the puzzle of Agatha Christie's The Mousetrap, a play that sets viewers hunting for both the murderer and the next victim. The Saint Michael's Playhouse production burnishes the dry British humor with arch performances and gives the crowd-pleaser a grand setting.

The Mousetrap opened in London's West End in 1952 and is still running, after some 27,000 shows. Its longevity may be a bigger draw than its theatrical merits, but it remains a clever mystery. With a lavish set, the St. Mike's production plants viewers squarely in 1950s Britain and preserves the script's mannered style in performance. Christie's meticulous construction survives all tests of logic, though her character tropes now read as a bit stilted.

Giles and Mollie Ralston (Gregory Jon Phelps, Clare Mahoney) are about to welcome the first customers to their guesthouse, a venture launched in a stately manor. They've picked a tough time to learn the ropes of innkeeping. After the guests arrive, a snowstorm brings travel to a standstill, even as Scotland Yard detectives continue to look for the murderer of a London woman. As a radio announcer describes the suspect's clothes, we watch Mollie pick up her husband's garments, each one a match for the police report.

But that's the last clue a review should give. The entertainment of the play is matching wits with Detective Sergeant Trotter (Jeffrey Todd Parrott), who skis up to the manor during the snowstorm to interview the Ralstons and their five guests. You can take it on faith the murderer is among them, and Trotter warns that the murderer's reference to "Three Blind Mice" suggests he or she has two more targets in mind.

The house is filled with hiding places and passages, but a spirit of British calm keeps nerves from fraying. Each of the eight people does something dreadfully suspicious, and something else serenely innocent. The audience's assignment is to be quick to judge and smart to reconsider.

Young Christopher Wren (Brett Figel) claims to be studying architecture, his namesake's subject, but he'd rather let loose his sharp tongue than give a straight answer to any question about his background.

Mrs. Boyle (Catherine Doherty) lives to scold. She finds the guesthouse sorely lacking in staff and amenities, and her displeasure earns her no friends. Could the cold heart that harrumphs so ceaselessly be colder still?

Major Metcalf (Kenneth Kimmins) is a brusque, graying eminence accustomed to being obeyed. For a war veteran seeking relaxation, he has a surprising curiosity about the house and its residents.

Miss Casewell (Jenny Berger) arrives wrapped in a trench coat with a hat pulled down over her eyes. She does a lot of silent brooding by the fire, but she also kicks up her heels to dance to the radio's popular music, driving Mrs. Boyle to distraction.

Mr. Paravicini (Bill Carmichael) comes in from the storm without a reservation. What he does have is an accent and a mustache that seem fake. He clutches a small bag that contains "everything I need" — a remark hinting at either how well he can improvise or how ominous he may be.

Most exchanges between the characters take place with a little disdain dripping off the ostensibly cordial remarks. Since the characters are sketched with the most superficial of features and the language is filled with clipped Britishisms, the performances have an artificial quality. Everyone is acting. And that's the point — we're watching people in some aspect of disguise.

Director Sarah Carleton uses the wide stage to place these suspects before us in quiet tableaux. She lets a very formal stillness fall in the room, especially when the exposition must be parceled out. Compared to contemporary comedies, The Mousetrap lumbers to get its story told. But for devotees of whodunits, it offers plenty of blind alleys and a solid surprise.

Bringing a mystery story to life onstage is a tough trick, even for a master plotter like Christie. There's little time for viewers to reflect and connect the dots, so the playwright paints with a broad brush; in turn, Carleton draws intentionally affected performances from the actors. This approach makes the characters easy to examine dispassionately, keeping them mere pieces in a puzzle. The script gives only Wren a little wiggle room for charm — and Figel makes the most of it — but the rest stay stuck in formality.

Tim Case's set transports viewers to a Tudor Revival manor house, complete with flickering fireplace and stately iron chandelier with appropriate faux medieval overtones. The lighting design by Annemarie Duggan uses wall sconces and table fixtures to imply the source of light — and to plunge the stage in darkness when something's afoot. Karen Gilmer's costume design sweeps us back to 1950s Britain, with plaids and pinks for younger characters, thick sweaters and tweeds for older ones, and a lot of buttoned suit pockets for the detective.

Scenes with two or three characters throw off bright sparks, but the grand set pieces in which the detective trundles out explanations tend to bog down. Given little movement to punctuate these arias of alibi and interrogation, speech alone is left to signal what's at stake. Here, Christie does not dazzle. Nor does she mean to. The Mousetrap is a riddle to solve, limited to caricatures. Indeed, the grim rationale for the murder has so little psychological tang in the telling that this revenge plot is served far too cold.

But, again, that's not the point. Every mystery turns on how little one can know about other people. In this production, the characters are stretched tight with archness, hard to believe and a little too hard to care for, but just right for an armchair detective to assess.

The original print version of this article was headlined "Suspicious Minds"