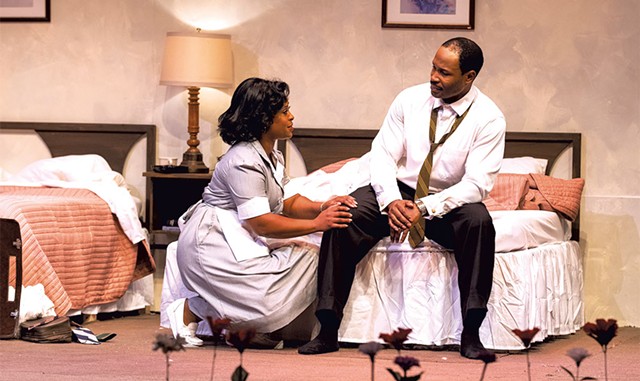 Katori Hall's 2009 play The Mountaintop is about a pivotal point in the civil rights movement, but this story departs from dry facts and lets a kind of magic clarify the stakes. Though the occasion is somber, Hall's characters have some funny exchanges, and the production at Saint Michael's Playhouse emphasizes the comedy.

The two-character play is an encounter between tired traveler Dr. Martin Luther King Jr. and a room-service maid at the end of a long day. A very particular day: April 3, 1968, the day before King will be assassinated.

The set is an unimpressive motel room, with peach curtains and two rumpled beds in which King and his roommate on the road, Ralph Abernathy, have tossed and turned. The nondescript room is 1960s modernism on a budget, but it's also recognizable as a historic place.

Scenic designer Tim Case creates the room with all its earthly particulars, and then lets us look above its walls to find a familiar motel sign, which will glow over all the play's action. We're looking at room 306 of the Lorraine Motel in Memphis, Tenn. The set toys with the rules of space; the playwright is similarly irreverent about time. Hall doesn't try to recreate the night before King's death. She imagines a different world in which that night takes place.

The action begins conventionally. When Camae, a maid on her first day on the job, brings King some coffee and a newspaper, each of them seems in need of some companionship, and they fall to talking. Camae is none too awed by King, and he searches for the best way to impress her and, soon enough, to flirt with her.

But this maid can hold her own, and the power balance starts tilting her way. After all, she's the one who produces both cigarettes and a flask of whiskey from her apron pockets, the very things King is craving. She makes fun of his smelly feet and proceeds to critique his nonviolent approach to social change with a parody of his speeches. She declares herself more allied with the Black Panthers, and King's pride in his own oratory doesn't convert her.

We are watching someone who can preach about seeing the promised land and fan the flames of hope and justice. tweet this

Hall is at pains to make King a common man. He may now be an immortal leader whose courage and vision changed the world, but in this play we see the hole in his sock and watch him lie when he phones his wife, smoke too much and flirt too automatically. His mortality is on display, which makes his impending death tangible. The abstraction of martyrdom is shoved aside by the reality of daily life.

The play contains a surprise that will feel like a gimmick to some and a potent theatrical novelty to others. Your response likely depends on whether the performers captivate you enough to let you accept a fable that grows to the bursting point of fabulous. This reviewer feels the playwright tries to dart through a minefield of cuteness to deliver a moving climax. It's well worth the journey, as long as both actors dazzle.

In this production, they impress comedically but deliver only part of the play's emotional depth. Director KJ Gilmer steers both performers toward the humor in Hall's script. Wednesday's audience laughed easily, seemingly eager for a summer comedy. The humor is there, and Gilmer brings it to the surface skillfully. The trouble is, it's tough to change tones for the script's ending.

To play King, David L. Murray Jr. studied the orator's cadence and vocal tonality. When the character embodies the public man, Murray's impressive mimicry gives viewers a little chill of recognition. We are watching someone who can preach about seeing the promised land and fan the flames of hope and justice.

As the private man, Murray remains riveting but occasionally lets his youth and limber physicality obscure King's weariness. When King examines his accomplishments like a man looking back on his life, Murray plays the moment as a chance to show that his character still has big dreams. Eager and loose, his King seems to have far too many plans for the shadow of death passing over him to register.

Yet Murray has an arresting ability to speak about fear and gives King some true darkness. This production, however, doesn't want to linger in such a mood for long. Alexis Tidwell, as Camae, is one reason why. She radiates humor and gives a sly, self-confident performance, always tugging a laugh line from her sleeve. Tidwell's sense of playfulness wins out over the script's hints of mystery.

Lighting designer Anthony Pellecchia and sound designer Caisa Sanburg create a convincing rainy day, then ratchet up their effects to turn that rain into a magical storm. Their theatrical feats resonate powerfully to become more effective than words.

The speech King gave before returning to his motel room is now called "the Mountaintop." In it, he rallies listeners for the nonviolent support of striking sanitation workers in Memphis. Though it's not quoted in the play, King gave a poignant hint that the work might have to go on without him: "I've seen the Promised Land. I may not get there with you. But I want you to know tonight, that we, as a people, will get to the Promised Land!"

The play ends with a coda that will rouse in most viewers a commitment to continue the work toward real equality. The promised land still seems far away, but the ability to glimpse it resides in everyone who can recognize injustice. Wednesday's audience sprang up for a standing ovation that was likely as much for King himself as anything seen onstage. That's the reason to see this production and to applaud Saint Michael's Playhouse for staging it.