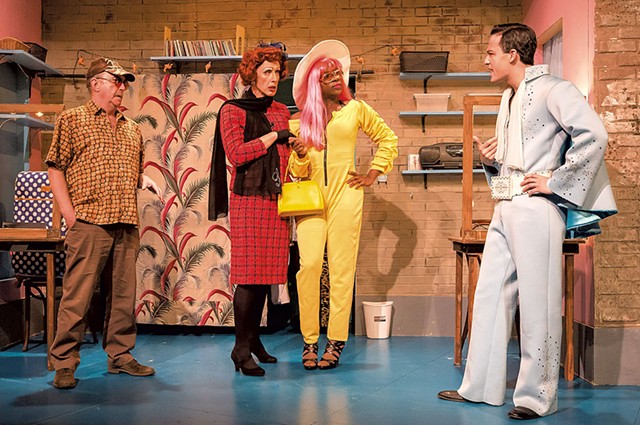 Matthew Lopez fills The Legend of Georgia McBride with drag spectacle, but it's the script's warm, wonderful humor that makes the characters so engaging. All of them are down on their luck. And except for drag queen Miss Tracy Mills, all have some big discoveries to make about who they are. In the Vermont Stage production, strong comic acting and a rainbow of costumes add up to thoroughly entertaining showmanship.

Viewers unfamiliar with the world of drag will get a loving, funny introduction. Those who know it well will see it treated with respect and impressively performed. The play doesn't stint on the sheer, glittery fun of drag. But it also shows what's underneath such over-the-top routines. Drag, as these characters prove, is liberating. This production embodies the comic side while honoring one character's observation that "Drag is a raised fist inside a sequined glove."

In a hardscrabble town in the Florida panhandle, Jo and Casey are living off her waitressing income and his meager earnings as an Elvis impersonator. He performs at a run-down club, and even though his lip-sync act has a few nice moves, he lacks the King's smoldering presence. With the box office dwindling, club owner Eddie replaces Casey's act with a pair of drag queens.

Sidelined to bartending, Casey's performing days are over — until a classic show-must-go-on moment finds him donning a dress. But drag is a commitment, not just dressing up, as Miss Tracy shows him. With an attitude lifted straight from Joan Crawford, Miss Tracy is not in the business of saving people, but her confidence radiates like a lighthouse beacon — and her voice has the depth of a foghorn — so Casey becomes her pupil.

The two drag queens, Miss Tracy and Rexy, have built an act that keeps them on the road and enables them to ignore their personal sorrows. Rexy drinks and Miss Tracy sees the world through a cynical lens, but both of them know their way around a pair of false eyelashes. And in different ways, they've found themselves by developing a drag persona to make public. That's just what Casey needs, too.

Director Gregory Ramos has focused each actor on expressing character through physicality. His emphasis on movement captures the story's exuberance and unleashes jubilant performances by the actors. Costume and makeup changes happen on the fly, and there are more physical transformations than viewers can count.

As Casey, Britt Michael Gordon conveys sweet sincerity, even dusting his Elvis snarl with a teaspoon of sugar. Gordon uses a soft Florida accent and bright, innocent eyes to make his character more lovable than loser. His optimism shines when he cheers up his wife and only briefly flags when, under Miss Tracy's tutelage, he faces the challenge of learning who he is as a performer.

Gordon doesn't showboat about the physical tests of the role. He's subtle. At first, he tilts forward in heels and walks with a slight clunk, but he quietly marks the passage of time with steady improvements. First, his balance settles; the next time he's onstage, his posture straightens; and finally he's loose enough for the music to move him. Many actors — and directors — would try to show his transformation as an ordeal, belittling and exaggerating female stereotypes along the way. Gordon simply blossoms.

Lia-Shea Tillett plays Jo, and her scenes with Casey brim with the unselfconscious affection true lovers only show in private. Tillett also lets the character train a gimlet eye on Casey's shortcomings, and her performance is compelling enough that viewers see her side as clearly as his.

Irving Green plays Rexy with a streak of pride and a dangerous weakness for dissipation. Green makes a spin on roller skates hilarious and a sermon on drag both revelatory and revolutionary.

As Eddie, Bob Bolyard is the picture of a sad-sack club owner who knows that bankruptcy is waiting in the wings. Bolyard exudes wised-up despair, but he, too, transforms.

Larry Connolly plays Miss Tracy with withering disdain that masks bottomless sensitivity. In lip-sync performances, Miss Tracy channels icons such as Judy Garland, and Connolly soars as he lets those legends lift him.

In this show, stage presence means shimmering spangles, and costume designer Mira Veikley and assistant designer Glenna Ryer succeed at dazzling the eye. Better still, they surprise. Even Eddie's taste in clothes evolves dramatically, and this show never gets tired of making things shiny. Veikley stages a one-two punch with outfits that delight viewers and make the performers look spectacular.

Vermont Stage replaces the first few rows of seats with cabaret tables and chairs. Never has a lobby bar been more appropriate, because patrons can carry drinks to their tables for a real nightclub experience.

Scenic designer Jeff Modereger's set is a wide playing space that forms the club's stage, with two recessed areas visible when the stage's shimmery back curtains slide open. These two spaces aren't much deeper than department store windows, but the blocking and set decoration bring them to life as the club's dumpy dressing room and the kitchen of Casey and Jo's small apartment.

Ramos uses the limited space boldly by sending the characters to and from the club's stage so briskly that the viewer enjoys a revolving door of perspective. In this show, what's hidden backstage or at home parallels what each character is concealing or just learning to reveal. When Casey enters the club stage backward, with a spangled back to the audience, the gesture is both a burlesque peekaboo and a declaration of emancipation.

In drag, performers transform externally, but it takes internal perception to inhabit a woman's body and mind. The enchantment of this joyous production is the depth these actors plumb in order to show a glittering surface.

The original print version of this article was headlined "Drag Net | The Legend of Georgia McBride, Vermont Stage"