Theater Review: The Hounds of the Baskervilles, Northern Stage 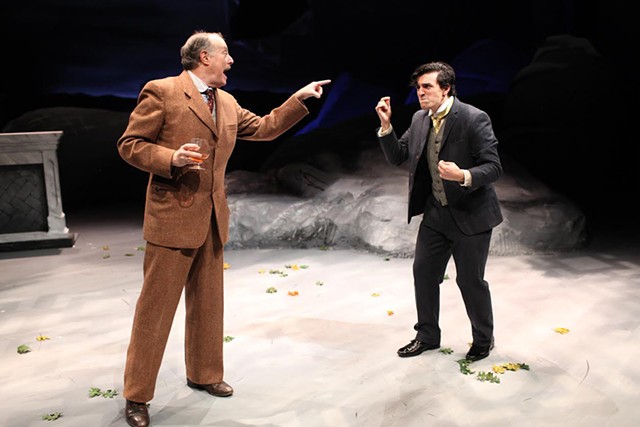 When we go to a play, we volunteer to be deceived. But in their adaptation of Sir Arthur Conan Doyle's The Hound of the Baskervilles, Steven Canny and John Nicholson seem to have taken a little oath: "We won't trick you." And it's the funniest trick of all, as this Northern Stage production demonstrates. While matching wits with Sherlock Holmes and Dr. Watson, the viewer is also invited to figure out what's real and what's fake about theater itself. Rest assured: Canny and Nicholson will trick you.

The play begins with a vivid theatrical suggestion of a spooky night on the moors. Sound effects turn the theater into the outdoors, with menacing wind and frightening dog howls. Scary lighting illuminates fog creeping over a realistic rocky outcropping and a stricken man stumbling in. But before the actor playing Charles Baskerville can complete his death throes, a second performer enters to call a halt to the scene.

The interruption demystifies the very effects just displayed and bursts open several layers of the play. Now the actors themselves are before us, using their real names, disclosing real facts about themselves. Or are these fake, scripted facts? Now we're reminded of the perils of live performance, in which a mistake has to be fixed. Or is it a scripted mistake?

Most important, now we must abandon the willing suspension of disbelief just as we were about to surrender to the best theatrical effects and sink into the imaginary world of the play. The curtain is drawn back, and the mood dissolves just like that phony fog.

Canny and Nicholson repeat this technique throughout the play, but it's surprising each time, and this review won't give away anything more. The delightful effect is that, just when the authors seem to be letting the audience in on everything, they have something else in mind: getting us to laugh at the slippery nature of what we believe to be the truth. Challenging what seems to be true is just what Sherlock Holmes does to solve a case.

This Holmes and Watson are adorably codependent. Watson yearns for Holmes' approval, and Northern Stage's production gilds it with a little edge of campy homoeroticism. Holmes is serenely smug in his conviction that he's the world's greatest detective. He needs Watson to "illuminate" him for the world to admire.

When Holmes deputizes Watson to tackle a case on his own, the sidekick is intoxicated by his promotion as he sets off to protect young Henry Baskerville, whose relatives have been dropping dead with suspicious frequency. Is the culprit heart attacks, supernatural hounds or a bad guy? The list of suspects isn't long, and each looks more guilty — and more cartoonish — than the last.

Director Peter Hackett, leading a strong cast, emphasizes the charm of the characters without letting the production succumb to giddiness. It could perhaps use a little more madcap abandon, but the energy and drive are sufficient to deliver Canny and Nicholson's humor. Hackett goes light on the physical comedy except in a memorable dance number, choreographed by Keith Coughlin and Sarah Case. The director buries some of the groaner puns — good riddance, some will say — and lets the characters shine as unruffled wits.

The play operates with the same quick-change, high-energy style as The 39 Steps. Three actors play all 16 roles, and the audience is made acutely aware of the rushed entrances and zippy costume changes. A woman's dress doesn't quite conceal the trousers beneath, and we nearly see skid marks on some entrances. But these are polished, intentional flourishes, designed to make the production of the play as much a point of interest as its story.

As Holmes, Thom Miller has an easy, affable presence, smiling through his "elementary, my dear"s and keeping the self-satisfied detective more charming than insufferable. Miller must quickly sketch a host of other characters, and these caricatures aren't much more than exaggerated physical features. These are such hasty creations that we only accept them because Miller gives us a proverbial wink while parading them before us.

As Henry Baskerville plus a few subsidiary roles, Jacob Tischler is a youthful ball of energy. He springs to his feet and leaps over obstacles; even quicksand seems no match for him. Tischler's earnest grin encourages us to root for him — we don't want lovable Henry murdered. But his headstrong penchant for strolling the moors leaves him dangling in danger for the whole play.

The tall, composed Bill Kux plays Watson with lovely reverence for Holmes. Kux becomes the consummate sidekick, focusing his every gesture on being overlooked. He shows a delightful kind of concentration, alert to everything around him and only speaking when spoken to. It's a stylish, accomplished performance.

Set designer Jordan Janota creates a nice sense of depth with a series of rugged rocks placed in the foreground and a painted scrim featuring the illuminated Baskerville manor in the distance. Even the set plays with illusions: The rocky platform looks real, but terrain on the sides is painted with comic-book shadows.

Ben Montmagny's sound design and Stuart Duke's lighting create such powerful effects that the audience is pretty much putty in their hands. Of course, in this show the stagecraft is sometimes exaggerated to call attention to the source of illusions, but the production relies on impressive technical skills.

Amy Sutton's costumes capture the romantic dash of Holmes and Watson, true to period and our classic memories of the duo. For everyone else, Sutton serves up silliness, probably with plenty of Velcro to ensure quick changes.

As funny as it is, this production takes a tame approach to material that can assume a Marx Brothers level of zaniness. The solid acting and high production values are thoroughly entertaining and aimed at audiences more interested in high wit than low comedy.

The original print version of this article was headlined "Mysteries Afoot"