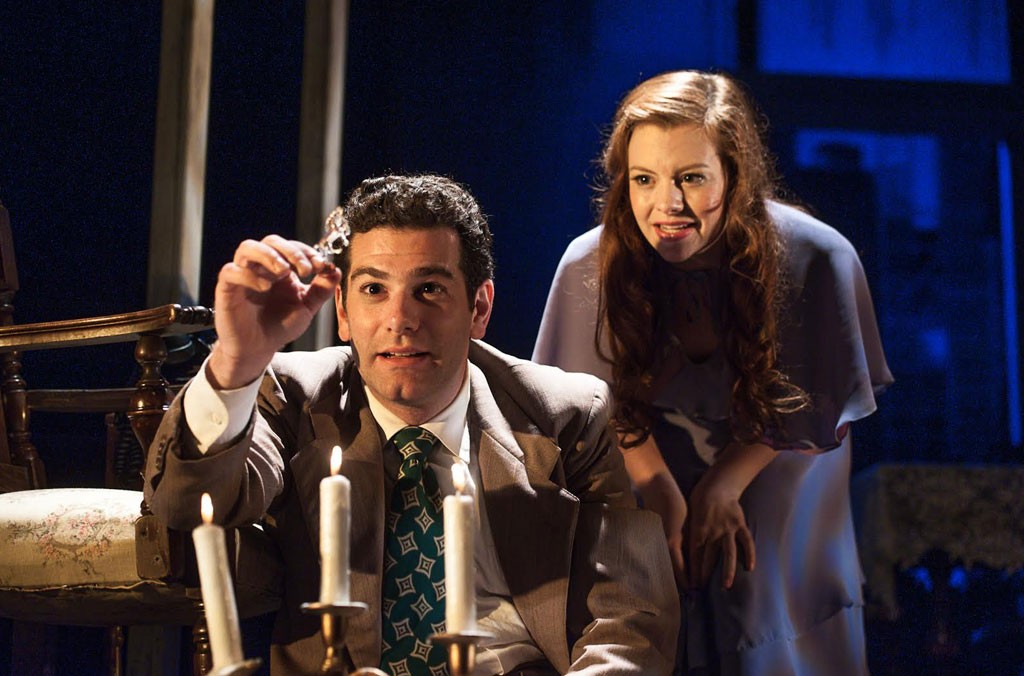 Almost every great story begins with intolerable conditions that a character must overcome. The powerful story in Tennessee Williams' The Glass Menagerie, which premiered in 1944 and is now playing at Weston Playhouse, turns on how long each of the four characters can delay making such a change.

Amanda Wingfield's husband abandoned their family years ago, and she and her two adult children now live in a tawdry tenement that opens onto a St. Louis alley. Amanda dwells on the past, still recounting her days as a southern belle. Her hopes for her children are delusions, but her insistence on them is unyielding.

Son Tom writes poetry and aches to find adventure, but leaving home would mean neglecting a family acutely in need of protection, especially his disabled sister, Laura. She withdraws into her collection of glass figurines, hoping to delay forever the need to face a world with little sympathy for her emotional and physical delicacy. Even Jim, Laura's gentleman caller, is still delaying a decision. His peak may have come in high school, and his hope for the future turns on the fantasy that a positive attitude will be enough for success.

Director Kristen Coury shows sensitivity to Williams' objectives without freezing the play in amber. She opens up the story to reveal its tragedy but doesn't let sentimentality swamp the performances. Staged with characters occasionally thrust far apart, the blocking emphasizes the distance in the family even within an apartment that stifles them.

The Glass Menagerie is an acting challenge, with four roles that each call for a deep understanding of the character's interior life. Each of them is outsize and can easily be exaggerated to unreality, but this production is fastidious about reeling in potential excesses. The result is a refined set of performances. The reverence for understatement is laudable, but the production registers a little more intellectually than emotionally. 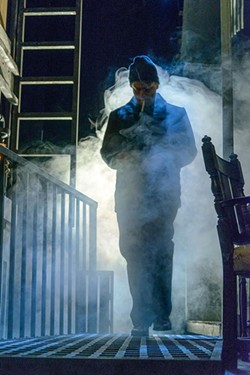 Amy Van Nostrand takes a novel approach to Amanda. She emphasizes her losses, coming to life when sweetly reeling off stories of her genteel and pleasant past, and then muffles her despair about the present in quiet practicality. The role is typically played with fierce intensity, making Amanda a virago of a mother. Van Nostrand's subtler choice is fascinating. Her Amanda is tender, never grotesque, as she reaches back to the feelings of her youth. When she curtsies and flirts with the gentleman caller, Van Nostrand inhabits the movement so fully that her gestures invite only compassion.

If she fully illuminates Amanda's soft, southern hopefulness, Van Nostrand does leave some other qualities in the shadows. Less visible is the character's unusual heroism, a combination of the courage to face a problem and a personal bitterness that leads her to pick all the wrong solutions. In her reined-in interactions with Tom and Laura, this Amanda is more an irritant than a parent capable of doing lasting damage. It's a trade-off, but very much worth seeing, for Van Nostrand delivers a compelling performance.

As Tom, Eric Gilde emphasizes the conflict with Amanda, quick to flare up and almost puzzled that he's still working his dull job to provide the family's meager living. Gilde portrays the anger but not the underlying resources that sustain Tom. He conveys his character's restlessness with brisk movements away from his mother and sister, and he carves out private space for himself so successfully that it's hard to see how oppressed he is.

Andrea Lynn Green offers a mesmerizing portrayal of Laura. She shows how broken the character is by her willingness to make her ungainliness a little ugly. Green uses a bit of a grimace for a smile, and when she folds in on herself to stare at the glass collection or wind up the Victrola, her withdrawal is scarily nihilistic. Green's courageous portrait skirts bathos and plumbs much deeper.

Ben Jacoby plays Jim with a lovely balance of robust energy and self-satisfied ease. In a scene where his character does most of the steering, Jacoby lets the little courtship build by reacting to Laura, so that each moment surprises.

Williams called The Glass Menagerie a "memory play" that should be staged without strict realism. Coury's production, supported by a fine design team, strikes a beautiful balance between depicting and evoking the world the characters inhabit. What is real is totemic — the Victrola that Laura plays, the cotillion dress Amanda resurrects. But other details, and the passage of time, are vaguely sketched.

Daniel Conway's set expresses Tom's recollection of an oppressive tenement apartment with precisely the unreality and contradictions of memory. The ceiling is raked at an acute angle, highlighting the compressed space, yet rising high, like Tom's dream of freedom. Conway lets light shine through it, showing a ragged edge of boards — hope mixed with destruction.

On both sides, a jumble of brick, pipes and fire-escape ladders powerfully represents the alley. Inside the apartment, Amanda's few scraps of gentility are on display, but the lace tablecloth and aging, ornate chairs only show what the Wingfield family has lost. Conway evokes the economic forces that shape the characters, especially through the harsh contrast between outside and inside.

Lighting designer Jiyoun Chang walks the same fine line as the text does between realistic events and poetic abstraction. The cones of light that occasionally pinpoint the characters subtly suggest the isolation each feels. Showing Tom, Laura and Amanda as intractable and fixed in space, Chang's lighting links their stasis to tragedy. Alley smoke and backlighting give Tom's nighttime wanderings both mystery and despair.

Williams marked sound cues in the text and considered a score essential to the play. Christopher Colucci composed the music for this production, deftly underscoring mood without telling the audience what to feel.

Williams' play is both indestructibly beautiful and fragile enough to collapse if the performances are weak. The strong acting and intelligent directing in Weston's production honor Williams' poignant, somewhat autobiographical story. Coury orchestrates moments of stillness and focus that resonate, especially in the play's closing tableau.

The Glass Menagerie is the first in Weston Playhouse's planned five-year American Masters Series of classic plays. These productions will include daytime school performances plus a show at Burlington's Flynn Center for the Performing Arts, bringing each play to a statewide audience. After the Vermont run, the production will move to the Gulfshore Playhouse in Naples, Fla., where Coury is the producing artistic director.

The Glass Menagerie by Tennessee Williams, directed by Kristen Coury, produced by Weston Playhouse. Through September 5: Tuesday through Saturday, 7:30 p.m.; Wednesday and Saturday matinees at 2 p.m., at Weston Playhouse. $25-48. westonplayhouse.org

The original print version of this article was headlined "Fragile Family"