Theater review: The Fool's Riddle: Hysteria Has No House 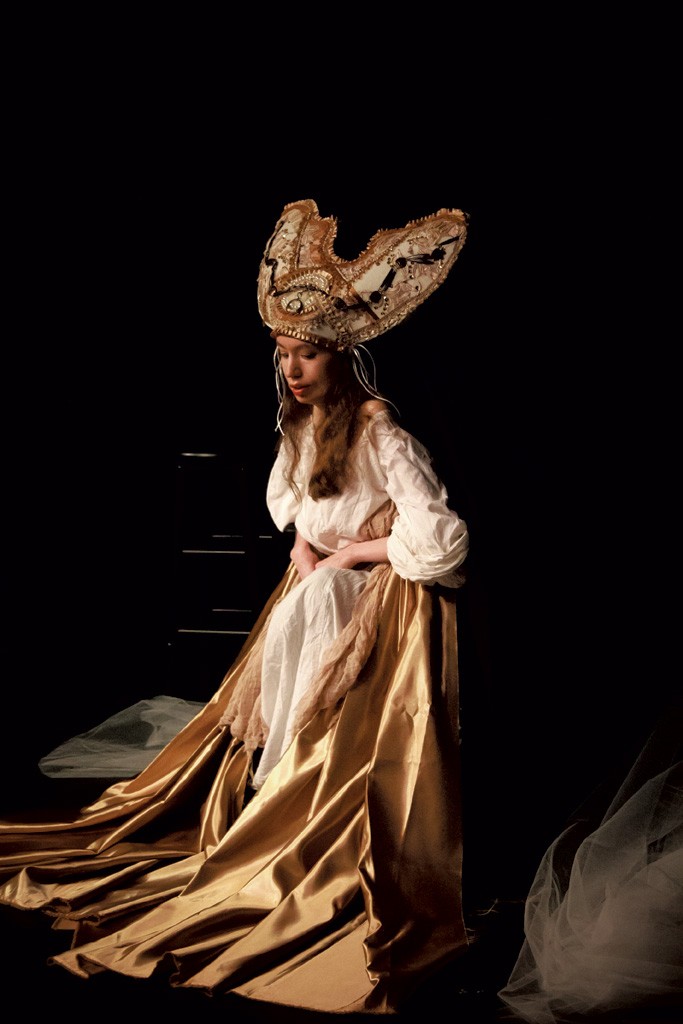 As The Fool's Riddle: Hysteria Has No House opens, the stage is black, and just a stack of books and a few scarves lie strewn on the floor. A young female dancer in a short top hat, tight jacket and leotard enters to unfurl and spin the scarves while the play's title and some wordplay are projected onto the back wall. And then two stage assistants roll on a wheelchair containing Jocelyn Woods.

Her entrance, under low theater lights, is mysterious. Gauzy fabric shrouds Woods, and assistants peel it away to reveal her in a loose array of tumbling white, iridescent garments. She wears a large, odd hat; something between a fool's horned cap and a stylized uterus, it represents the two central preoccupations of this play.

Woods speaks from the stationary wheelchair, her movement confined to slight changes in the upper half of her body. The program states that she has a neuromuscular disease. It's evident in her skeletal arms and bent wrists, curled inward to plant her hands in her lap. But Woods distills our attention to her vocal power and facial expressiveness, and, though she's a frail figure, her wheelchair assumes the significance of a throne.

As well as performing, Woods wrote and directed The Fool's Riddle. But she is not alone onstage. Woods characterizes herself as the Fool; she calls the dancer, played with nice concentration by Becca Aranda, the Stranger. As the show progresses, Woods seems to grow more powerful in her chair. During transitions made tantalizing by low light, she has assistants quietly ministering to her in small gestures that transform Woods' costumes. She has music underscoring some transitions, and photographs of herself projected on the wall.

She has the Stranger, a companion who primarily sits or stands still on the stage but occasionally portrays a metaphorical analogue to something the Fool says. After a while, it's clear Woods has caused all of these things to be. She may not be capable of lifting her arms, but she has constructed a world to rule. It's remarkable to watch her fragile presence as the center of something that emanates in ripple after ripple, projecting from her.

Visually, the play is riveting. But the text is ultimately a collection of abstract pronouncements, chiefly centered on society's tendency to condemn misfits and women. The Fool, insofar as she's a character, is an outcast continually bristling with unfocused offense.

The play makes frequent reference to long-debunked medical and psychological beliefs about hysteria. Anything from moodiness to mental illness was once ascribed to the idea that the uterus could roam about the body. The notion of the wandering womb arose with early Greek physicians and lingered in Western medical thought until the 19th century, but is no longer accepted. Still, Woods feels the need to tackle this image like a pernicious, ongoing threat. She mounts an unceasing attack, but it is limited to vague, abstract statements.

That abstraction is the script's downfall. There is no dramatization, the occasional tumble or twirl of the Stranger notwithstanding. Instead of telling or enacting a story that embodies an idea, the text proclaims wrongs as generalities. The Fool's Riddle survives quite well with limited motion, but it cannot survive the lack of character and conflict.

Every one-character play flirts with this danger. Because the Fool experiences no emotion other than formless outrage, she's not a complete character with an objective or a story. The Stranger doesn't serve as a character or even a foil, but as an occasional metaphorical echo of the Fool's musings. Ironically, the Fool in King Lear, which Woods references, is a character only interesting in contrast to Lear — his riffs and declarations are dramatic dead ends until they entwine with Lear's vision of the world. Theater relies on interaction, even if only in stories recounted in monologue, but Woods' play neglects it.

This production proves that the simple spectacle of a nearly motionless woman in a chair is more than enough to produce a visually arresting presentation. The use of screen projection, dramatic lighting, costume changes and dance supplies complexity and a fairly full palette of theatrical stimuli. But without conflict, character and change, there is no story.

The experience of watching this play plainly includes awareness of Woods' stamina and conviction as a performer. The role she's written is confined to polemics about misogyny, mental illness and eroticism. Her Fool remains in essentially the same emotional state throughout the 100-minute production: indignant, disappointed, distanced. She's not so much a character as she is a voice of judgment. Woods is impressive at maintaining our attention by sheer force of will, but the script gives her very little to say.

As a script, The Fool's Riddle lacks the conflict essential to drama, but Woods' imaginative staging is strong compensation. Should you see it? It's worth having your curiosity satisfied if you've begun to wonder how Woods goes past her physical limitations to hold the stage for nearly two hours. And if you share the author's distaste for doctrinaire views on social outcasts and the weakness of women, you can find your interests loudly proclaimed. There isn't great poetry here, but the somewhat surrealistic presentation gives this sweeping, conceptual rant a seductive gauziness.

As an artist, Woods can stand on her own, without excuses for her disability. Her fierce commitment to performance is enough. But to have an effect on an audience, she needs to move past a confining preoccupation with herself. Projecting art photographs of oneself during a monologue that admits no other character is, ultimately, deadening narcissism. Woods' isolation extends to mispronouncing words that perhaps she's only read and never heard. Without a collaborator or director to inform or contradict her, she's restricted by more than a wheelchair. But should she extend herself outward, we might find she has plenty to say to us.

The original print version of this article was headlined "Feminist Fool"