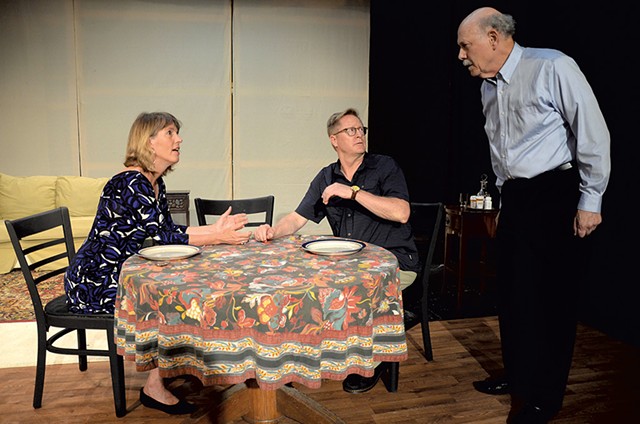 Time takes a toll on the body and mind and provides us all with a private drama. When a family member suffers from dementia, the pain becomes more public. In support groups and tearful conversation with confidants, we share the sorrow of seeing a loved one set adrift on a boundless, bewildering sea.

French playwright Florian Zeller's award-winning 2012 play The Father opens a portal into the personal and familial realms of dementia with its tale of a man's mental decline while in the care of his daughter. A production directed by Alex Brown runs through August 3 at Marshfield's pastoral Unadilla Theatre.

Playing André, the titular father — le père in the play's original French — Vince Rossano dramatizes the struggle to maintain the status quo of his simple retired life. Above all, André would like to continue living in the Paris apartment where familiar surroundings moor him to reality — even though, at the start of the play, that mooring has already begun to loosen.

As narrative objectives go, André's is pretty basic. His path, however, is booby-trapped with dangers all too familiar to caregivers of people with Alzheimer's: a perpetual sense of betrayal and compounding confusion. André is a King Lear who never leaves the house.

It falls to Andre’s eldest daughter, Anne, played by New York state politico and Fordham University law prof Zephyr Teachout, to talk sense into him and to arrange his humane denouement. Though childless, she finds her difficult father an oppressive responsibility and a formidable obstacle to living her own best life.

This deceptively simple premise is complicated by the play's treatment of time. Presented in scenes that are out of chronological sequence, the action initially sows as much confusion in the audience as it causes André. As he struggles to keep track of where he is, we also try to organize information into a coherent sequential narrative.

The play's opening scene is our first and last opportunity, until the closing scene, to be sure of where and when we are. In subsequent scenes, it's less clear which of the events André is remembering accurately, which he merely thinks happened and which he doesn't remember at all. André's oft-mentioned but absent younger daughter, Elise, represents one such gap in his memory. Knowing Elise's fate, Anne can't contain her sadness at the mention of her sister's name — despite André's repeated insult that the younger is his favorite.

Time is not the only distorted element in André's world. The very people who share his living space change form. Two actors — Chris Pratt and Jeff Tolbert — appear as Anne's romantic partner in different scenes. Anne is played once not by Teachout but by Susannah Blachly. And two actors — Blachly and Alex Smart — play a caregiver named Laura in two different scenes.

The result is a curious, innovative portrait of dementia, in which André's world is presented as being in temporal and material flux while he remains constant: steadfast, determined not to be discarded, disrespected or cheated. In this, André becomes the embodiment of a tragic irony that many people suffering from dementia become. His stentorian certainty about what's going on around him, as when he accuses a caregiver of stealing his watch, is but a sad manifestation of his gathering confusion.

Rossano plays the faltering patriarch with confidence and frenetic physicality to complement his frantic state of mind. Remarkably, Rossano wrings laughs from André's decline — probably because we catch only glimpses of the fear fueling André's orneriness. What we see onstage is an overbearing man blustering around, propelled by wrongheaded notions and doubling down on positions for which he finds no support. His misguided arrogance creates an easy target for ridicule, and the audience laughs reflexively.

Brown's direction shows a keen sense of where opportunities for levity lurk — critical to buoying up this heartrending story — and Rossano succeeds in exploiting them.

When the play finally reveals André's battles with other characters for what they truly are — proxy battles with his own harrowing sense of vulnerability — the laughter subsides. That vulnerability is illustrated with disturbing potency in a scene in which Anne's romantic partner — this time played by Pratt — threatens André with physical violence. The tense scene uses slight physical contact to suggest capacities for cruelty that bring to mind Harold Pinter's "comedies of menace."

Teachout, playing the long-suffering daughter, likewise maintains a powerful stage presence throughout the show — maybe too powerful at points. Her Anne is a match for her hardheaded father, not shrinking from the effort of correcting his delusions. Her strong vocal projection, though, coming from a character in a fairly persistent state of agitation, can undermine the nuance in exchanges with other characters. Anne's angst is justified, but her limited emotional range deepens the rut in which her caregiving is stuck.

In a moment when André's dementia has made him fearful — an emotional break from haughtiness — Teachout's vocal force squelches the tenderness in Anne's attempt to console him. Teachout's Anne is rarely shrill, but she's often sharp. She engenders sympathy, but her guardedness makes her, like her father, a human island in these murky waters.

The characters' isolation, in turn, clouds the play's viewpoint, which seems to shift from scene to scene. Are we to assume we're seeing all events through André's distorted lens? Or should we take certain events at face value and watch, with pity for all involved, as André fails to comprehend them? And what are we to do with this nagging feeling that André's caregivers are somewhat ill equipped to soften his landing?

It is perhaps this last question that gives The Father its strongest resonance, making it truly — and sadly — a play for our time. In the tradition of great theater, the question comes back to us: What will we do when this epidemic touches us? Unadilla's energetic, committed staging of The Father offers few guidelines except to batten down the hatches for a rough passage — and to try to steal a laugh where we can along the way.