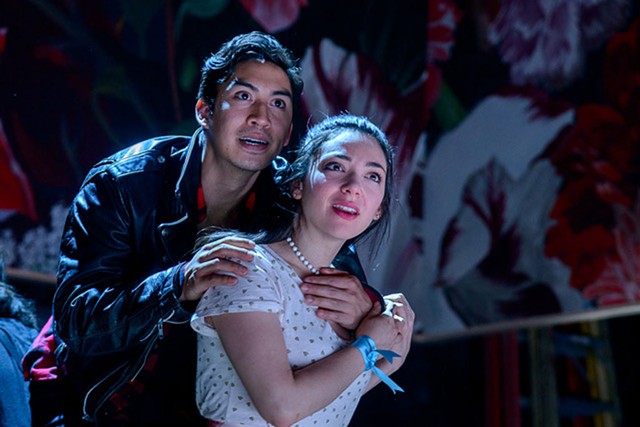 In the late 1950s, when musicals were big and getting bigger, lyricist Tom Jones and composer Harvey Schmidt wrote the smallest musical they could. The Fantasticks tells a complex story of love and shattered illusions, and does it with deceptively simple characters and enduringly beautiful music. The Weston Playhouse production infuses the show with contemporary vitality and brings out both the playful and the melancholy in a musical built on contradictions.

The story is so simple that it appears to be finished before intermission. A 16-year-old girl and the 20-year-old boy next door fall in love. Hopeless, mushy love; sincere but cloying. Their fathers have tried to keep them apart, going so far as to put up a wall between the houses. An old and predictable plot. But The Fantasticks is about looking at life from a little distance, where opposites converge and romance is both laughable and laudable.

The story of young Luisa and Matt is narrated by the acerbic El Gallo and illustrated by a nimble Mute, who stands in for the wall and facilitates other bits of action. The musical's theme is the discovery of illusion, and when two aging actors stumble in, they become part of El Gallo's demonstration of what it means to lose the self-confidence of youth, including the certainty of love.

The Fantasticks holds the record for the world's longest-running musical, having opened at a small off-Broadway playhouse in 1960 and closed in 2002 after more than 17,000 performances. Because it deals in archetypes, even 60 years later the story of innocence and experience isn't dated. In Weston's production, the young men (including the music director behind the piano) wear hipsterish checked shirts; the old ones wear clueless loungewear. The visible updating doesn't have to go much deeper, aside from making some gestures more overtly sexual.

But subtler changes make this production vital and current. The score's beautiful but somewhat stately melodies acquire a hotter edge, and the central theme of lost innocence glows with special clarity today. The production acquires contemporary power from the riveting intensity of the eight performers themselves.

Director Susanna Gellert, in her first year as Weston's executive artistic director, emphasizes the show's allegorical storytelling by using a formal, presentational style. She often positions the actors in symmetrical stillness, then lets them launch into action with the impulsiveness of bottled-up energy. To amplify — and simultaneously undercut — the script's phantasmagorical elements, Gellert and scenic and lighting designer Scott Zielinski expose the playhouse's unglamorous back and side walls. They park the musicians at piano and harp squarely onstage and eliminate the teaser curtain to reveal the lighting grid.

If the bare walls say, "nothing up my sleeve," the story showers plenty of surprises on the audience. It's the eight-member cast that completes the magic. Though their characters are intentionally uncomplicated, each must embody contradictions, evoked for both humor and pathos. The performers excel at putting beating hearts underneath the story's cardboard cutouts.

Julie Benko, as Luisa, has a face that can render every blushing excess of adolescence, from saucer-eyed hope to defiant daring. Resisting squeaky youthfulness, she turns an abstract ingénue into a person both decisive and awkward. And her strong singing is a window into a Luisa with a real soul.

As Matt, Francisco González flexes untested courage and trails off into dreaminess until the story forces him to face hard truths. With a silky voice and graceful movement, González beautifully reflects the heroism each viewer projects onto him. He's captivating in "Soon It's Gonna Rain," his duet with Benko, and "I Can See It," his exchange with El Gallo.

Devin Ilaw fills El Gallo with a thrilling fire. He enters with a radiant smile, and it's impossible not to trust someone with those flashing eyes, even if his cool self-assurance warns that we shouldn't. Ilaw enchants as a dancer and singer as El Gallo lets himself be touched by events he once appeared to control.

The Mute, played by Megumi Nakamura, witnesses or stirs the action. Her reactions are just big enough to show engagement, punctuating the audience's experience. With precise movement, she embodies magic itself.

David Bonanno and Wayne Pretlow play the fathers. They let the struggles of fatherhood cloud their tired faces, but then they kick up their heels and dance in exuberant duets. Both their funny feud and their warm friendship are truly adorable.

Geoffrey Wade plays the old actor with glorious, rickety grandiosity. The character believes so firmly in his threadbare doublet and shaky Shakespeare quotations that his hammy declamations are a delight.

The other wandering trouper, played by Tom Aulino, specializes in death scenes. Aulino sets him tottering across the stage and produces lovely suspense about how overblown a theatrical demise can be.

On Weston's relatively big stage, Gellert's version of the musical's minimalism sometimes puts the viewer at too great a distance. Above the grand piano and bare theater walls, Zielinski rings the stage with a massive floral painting that dwarfs the performers. The actors have to compete hard with these large elements. When Gellert adds a superbly lit, rippling curtain of Mylar strips to suggest the woods, viewers are likely to be mesmerized by the green-gold shimmer and not the love scene. Because the audience must reconcile so many points of focus, the story at the center is overpowered.

Music director Yan Li allows the music to swing a bit, setting aside the stale staginess of classic Broadway. The wistful "Try to Remember" is especially strong with the whole cast singing it as the show begins. Fine musicianship aside, in Friday's preview the vocals too often lost sonic battles with the piano.

Sometimes the best way to explore complex emotions is to stylize them into allegory. And it doesn't take a big spectacle to dazzle the audience, just a simple sign of enchantment. Confetti will do. In The Fantasticks, it rains down.