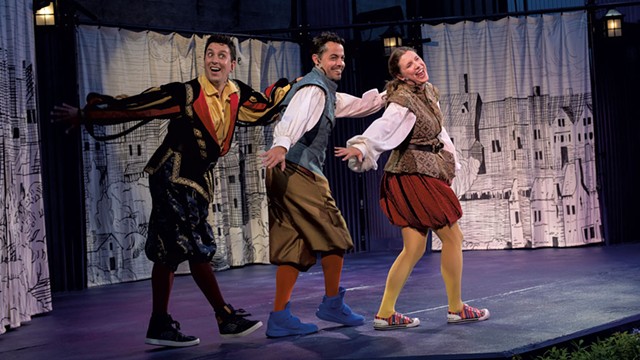 Northern Stage hasn't just restarted live theater in Vermont. They've built a new outdoor theater and developed a production especially suited to welcoming back actors and audiences, updating the comedy The Complete Works of William Shakespeare (Abridged) to capture what it feels like to emerge from the pandemic.

The Complete Works, written by Adam Long, Daniel Singer and Jess Winfield for the Reduced Shakespeare Company, premiered in 1987. It's a dare: Can three actors present all 37 of Shakespeare's plays in an evening? They're still working out the details, and there's been no time to rehearse, so they'll wing it.

The play celebrates spontaneity as much as — or more than — Shakespeare, with missteps, frantic scene changes and lots of direct address to the audience.

The script asks the actors to personalize the show, so Grayson DeJesus, Jenni Putney and Eric Love use their own names, throwing in biographical details, some true and some just good comedy. During her time in pandemic isolation, Putney claims she was studying Shakespeare, but binge-watching "Bridgerton" seems to have left a bigger impression.

DeJesus turns his first entrance into a fusillade of special effects to mark the importance of performing again. And Love is so desperate to get back under the lights he begs for a chance to don some of the worst female wigs ever seen onstage.

Improvisation and contact with the audience erase the fourth wall. Thursday's preview show kept a nearly full house laughing, bad jokes forgiven and good ones applauded. The actors seemed eager to feel lifted on the wings of a crowd and the audience happy to cheer them.

The play tosses plenty of slings and arrows at Shakespeare's plots and verbal hijinks but does so with the affection of good parody. Compressing all the history plays into a football game — with the crown itself hiked, thrown, fumbled and snared — is not a bad way to follow the wild swings of royal succession. The humor runs the gamut, low to high, from a whack with a rubber chicken to a silly but oddly valid deconstruction of Ophelia.

The actors seemed eager to feel lifted on the wings of a crowd and the audience happy to cheer them. tweet this

Now 34 years old, the play was in need of the smart refurbishing that director Carol Dunne gave it. Othello was once treated as an excuse for white hip-hop; in this version, Putney sings an update of Cole Porter's "I Hate Men" to mock both Iago and Othello. The stale gag of feigning horror at men playing women, not even that funny during the Reagan administration, becomes playful freedom for drag.

The production does more than plug in current pop culture references; it marks the transition we're all sharing right now.

Those keeping score on the "complete" promise will have to accept a brief nod to the sonnets and passing mentions of some plays. Sure, a breezy reference to a duke leaving town may not constitute covering Measure for Measure, but why quibble?

Mashing all 16 comedies into one hyper-speed sketch is a clever idea that highlights how tough it is to tell them apart. The actors take pride in their speed and formation-flying precision, but this was the one spot where things could have slowed down just enough to let us relish some of the allusions whizzing by. Exhilaration is all you get, plus abundant flying feather boas.

Hamlet receives expansive treatment, staged pretty much as an 8-year-old might remember its events, including the big sword fight. The show's finale is a hilarious physical stunt that tests the company's stamina and the audience's attentiveness.

Start to finish, the actors imply they're making this up as they go along, but they have rehearsed every hairpin turn and formed a working bond that's a joy to watch.

DeJesus is up for anything as he vaults from role to role. To play Romeo, he drapes a bad Beatle wig over his eyes to portray a lunkheaded kind of cool. As his tragic roles stack up, DeJesus dies beautifully — and often — but he's truly more fun alive than dead.

Putney is relentlessly, courageously goofy, equipped with a comedian's essential strength of holding a straight face. She gives Hamlet's famous soliloquy a trace of peevishness just to shake up the familiar, and always finds unexpected comic edges for her characters.

With wide-eyed delight, Love takes on Shakespeare's great female roles. The script calls for women's high emotion to end in falling to the ground and vomiting, and Love's ability to make this childish gimmick work demonstrates his wall-to-wall zeal for performance.

The tech is first-rate. Michael Ganio's set is all about the entrances and exits, its curtains embellished with antique prints of London. Kate Marvin's sound design has jokes of its own, and Travis McHale's lighting combines flashiness and fun.

Paul West directed the fights, and the actors' swordsmanship deserves the applause it gets. Costume designer Barbara A. Bell summoned up a bottomless trunk of clothing to fit every moment.

Northern Stage has followed guidance from the Centers for Disease Control and Prevention and the Actors' Equity Association to keep audiences and actors safe. The stage is outside, the seating parks viewers in pods to enforce distance from strangers, and the audience remains masked for the 90-minute show. These precautions may seem extravagant now in Vermont, but assuring safety for the vaccinated and unvaccinated, including kids, is a smart way to open.

When the Northern Stage staff turned a creative gaze at an unprepossessing back alley, bold imagination kicked in. The new theater was carved out of the space to the side of the Barrette Center for the Arts. What once was home to dumpsters is now a landscaped space with fairy lights dripping over one wall and soft, fragrant mulch underfoot. The lighting arrays allow for big effects even in the summer dusk. Actors are miked, and the outdoor seating is first-class comfortable.

This production is about theater itself, from show-must-go-on energy to the connection between actors and audience. At one point, the actors take up pom-poms to give a cheer for Northern Stage. Cheers indeed, to a theater that faced the economic and artistic losses of the pandemic and now expresses its own resilience in laughter.

The original print version of this article was headlined "Slings, Arrows and Hijinks"