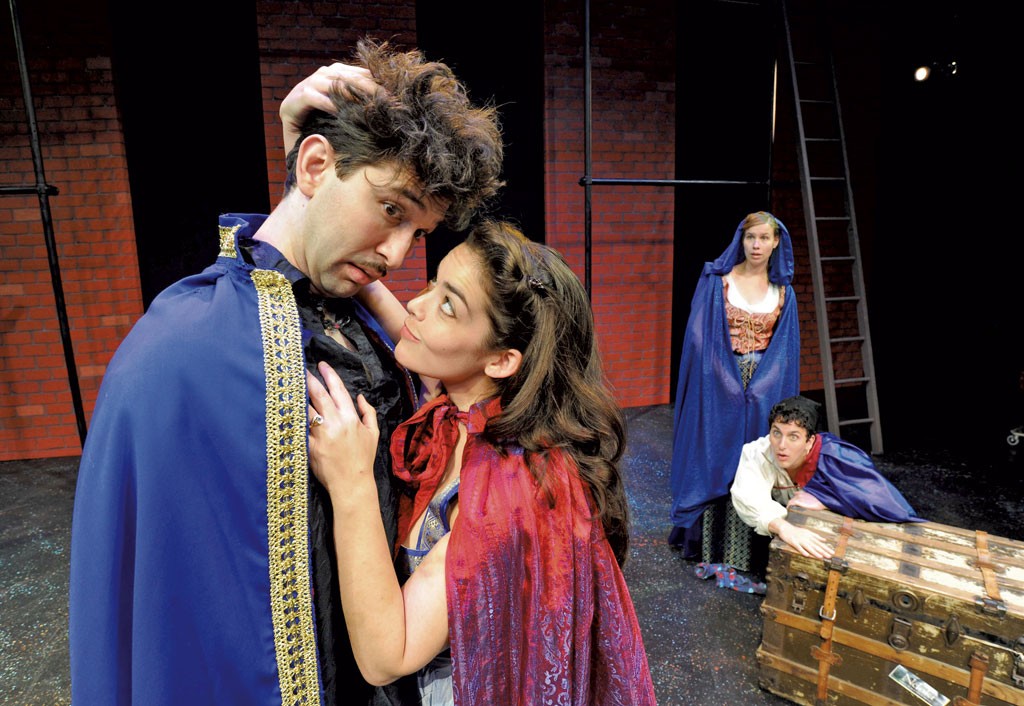 Lost Nation Theater's production of Comedy of Errors begins with a hint that we're backstage, watching a theater company. Actors in street clothes casually stretch in front of a brick wall as the audience is seated. The lights shift to reveal two actors in silhouette, offstage. One delivers the last lines of Hamlet over the other's body; we hear distant applause. When the performers pass through the curtain into the playing space before us, Hamlet laps up praise from his fellow actors for his performance, then yearns for just a little more — a demonstration of the fleeting joy of theater. It's a sweet and funny moment that primes the audience for comedy.

This promising start suggests that Lost Nation's Comedy of Errors will be seen from the inside out, with the effort to stage it made visible. The costume rack that's rolled onstage is a tantalizing signal that the backstage point of view will be fascinating. Frankly, Comedy of Errors can use the help. It's one of Shakespeare's earliest plays, without memorable characters or language. But the backstage framing device falls away as the actors begin the play in earnest, and it doesn't return to bracket the ending.

Instead, the production relies on the exuberant energy of sparkling lead performers and a fast pace established by director Kim Allen Bent. Patching the plot holes with speed is a smart move, though some scenes roar by at such a breakneck pace that it's tough to comprehend the details, let alone the puns. Ultimately, this is one of those Shakespeare plays that earns some of its laughs by creating an atmosphere in which things are supposed to be funny. We laugh because it's expected; a great deal of comedy trades more on mood than content.

Shakespeare confines the action to a single day and a single street. The story is little more than the last coincidences necessary to reunite two sets of twins split apart in infancy during a storm at sea. One son, Antipholus, plus the boy destined to be his servant, Dromio, ended up in Ephesus. Their twins, using the identical names, became Antipholus and Dromio of Syracuse.

Ephesus and Syracuse are rival cities, and the twins only cross paths when the Syracuse pair — and, as it happens, Antipholus' father, Egeon — enter the city that forbids the citizens of Syracuse from entering. Egeon is awaiting execution for that very crime while the boys from Syracuse — yes, the musical is based on this play — run into a host of people who stun them by getting their names right and notions of their debts, wives and affections wrong.

The errors that must be set right are all superficial misunderstandings, though they do get as far as an infuriated wife and property that doesn't reach the intended hands. Unaware that twins are on the loose, all the characters mistake their identities, but there are no attempts to deceive. Indeed, there's little inner life at all, save for Antipholus of Syracuse's wide-eyed wonder at the way he's recognized in a strange city.

Shakespeare doesn't tire of having the masters mistake their own slaves and send them off on errands. When each Dromio returns to report success, he invariably intersects with the Antipholus who did not commission the job. Slapstick and beatings ensue as even the audience puzzles over who's who.

The mistaken identities are easily resolved, but the play contains some dark clouds that aren't as simple to disperse. Violence, slavery, strict legalism, obsession with commerce, marital jealousy and a promised execution all dot the story, so it's up to a director to decide how much of it to allow into this light comedy.

Bent and codirector Brett Gamboa keep the tone as sunny as a pop song. They produce a good-natured version of a play about a brute (Antipholus of Ephesus), a bit of a fool (Antipholus of Syracuse) and their long-suffering servants. The energy is delightful; so what if some of the physical moves, such as clambering along a scaffold or hopping up on a sawhorse, have little thematic logic? It's simply fun to watch.

In a play about mistaken identity, there is no substitute for real identical twins, but this production makes a try by having Christopher Scheer play both masters and Eric Love both servants. Clever costume designer Cora Fauser provides double-sided capes so the Syracuse pair is in red and the Ephesians in blue.

Scheer's Antipholus twins look alike, but the actor concentrates on revealing the differences in their characters. Syracuse is cheerful, hopeful and dazzled. Ephesus is belligerent, peeved and sarcastic. Scheer lets his face slacken with wonder as Syracuse, then scrunches it up as Ephesus. His transformations are sharp enough to make his mustache look like a villain's as Ephesus and like a sweet youth's first facial hair as Syracuse.

Love makes both Dromios adorable, accommodating powerhouses, the ideal eager servants. There's nothing they won't cheerfully do for their masters, no matter what rebuke may lie ahead. Love is especially entertaining when stricken with comedic panic because a very fat, very loud cook is convinced one Dromio is the other Dromio, her lover. That's one role this Dromio dreads to play.

Kate Kenney is excellent as Adriana, wife to the cruel Antipholus of Ephesus. Kenney turns on a dime from baffled to furious, and from romantic to scheming, as Adriana goes toe to toe with an apparently ever-changing husband.

With impeccable timing and lovely visual takes, Scott Renzoni portrays a merchant caught in the crosshairs of the play's mistaken-identity motif. Robert Nuner's Egeon tells his long, sad life story with a nice blend of nobility and suffering, and lets a wave of real tenderness crest over him in the finale.

The finale, of course, must bring the twins face-to-face. This production finesses the point fairly well, but the moment of recognition is sadly absent. Since the joy of the play turns on eight characters finally realizing who is who, this production can't cash in on the climactic "You at last!" moment. But with delightful performances and brisk pacing, Lost Nation delivers enough humor to warm an autumn night.