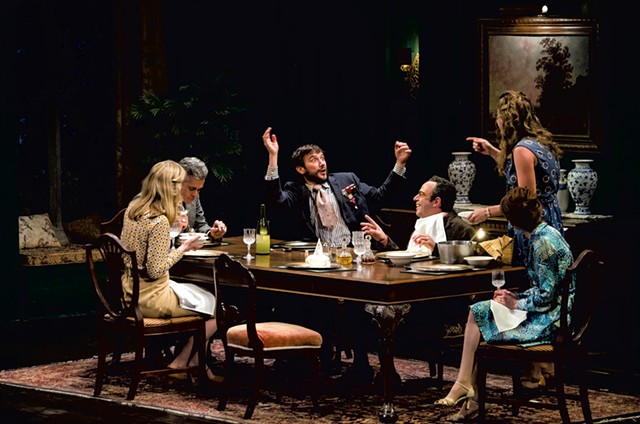 Dorset Theatre Festival's production of Table Manners is one delicious excuse to laugh. Six characters, hilariously unaware of their own flaws, represent two marriages grown stale and one courtship that can't get off the ground. It's 1973 and love is all around, but seduction — let alone romance — isn't easy.

Using the same actors and design team, three of Vermont's professional theater companies are each staging a piece of Alan Ayckbourn's trilogy The Norman Conquests this season, and now it's Dorset's turn. The buoyant production is a showcase of excellent direction and ensemble acting.

The trilogy takes place over one weekend in July. Each play stands on its own, depicting the same characters as they occupy different locations around an English country house. Some events are simultaneous, so an exit from one play becomes an entrance in another. The characters shuttle between the lounge (Living Together, produced by Northern Stage in April), the terrace (Round and Round the Garden, coming up at Weston Playhouse in July) and the dining room, for Table Manners.

Ayckbourn's play is a prefeminist artifact of the 1970s, so please suspend modern moral judgment to keep the humor alive. Sarah and husband Reg have come down to the family home to give Reg's sister, Annie, a break from her responsibilities as their mother's caretaker. Annie's intended holiday is with, of all people, her sister Ruth's husband. That would be Norman. And it wouldn't suit Sarah at all; she'd prefer Annie set her sights on Tom, the neighbor who's as romantic as his Wellington boots.

When the hoped-for tryst is canceled, all six characters are stuck together for the weekend, simmering in family tension and jealousy, neatly spiked by Norman's willingness to flirt with any woman he sees, including his wife.

Great comedy always looks effortless, but every reaction, gesture and beat must be fitted with a jeweler's precision. That's what director Evan Yionoulis supplies to create this rollicking production. Her ability to focus our attention on telling details in scenes that verge on slapstick is wondrous.

All six characters are stuck together for the weekend, simmering in family tension and jealousy. tweet this

The play is not a farce, but Ayckbourn honors the tradition with outsize characters. Sarah is so high-strung that her anxiety is audible, and Caitlin Clouthier shines in the role. When Reg yells at her, Clouthier takes all the time in the world to heave a sigh, rest a hand on the chair in front of her, inch her shoulder still closer to her ear and tap one finger as she marshals the resolve necessary to tell him, in the lowest of voices, never to speak to her that way. She's a master of the comic beat.

As the indefatigable Norman, Richard Gallagher is a hilarious bundle of enthusiasm. When Norman manages to infuriate everyone — you need to have seen Living Together to know precisely why, but the details don't matter — Gallagher handles his effort to overcome their silent treatment at breakfast as the game he's always wanted to play. And every time Norman tests someone's patience, Gallagher proves he has to be forgiven.

The cast is a true ensemble, building scenes together and honoring each other's littlest pauses and biggest takes. Jenni Putney, as Annie, is a delight as she carefully decides which battles to pick, conceding defeat with a shuffle and a sigh until she finally stands her ground. Playing Ruth, Ashton Heyl integrates her character's cavalier attitude toward Norman's infidelity with a merciless willingness to annoy her husband.

A play set in a dining room is a good excuse to make one character hungry the whole time. With equal gusto, Mark Light-Orr presents Reg's two appetites, for food and for the braying laughs of his own doltish bonhomie. Ever oblivious, his Reg has the nonstop affability of a golden retriever that's always in the way.

David Mason captures Tom's nutty shyness by adding a gentle stammer — it's his thoughts, not his tongue, that trip him up. In the Northern Stage production, Mason had the character veer toward idiocy to show his social shortcomings; now he's seized on the British reserve that freezes Tom in the headlights of oncoming love. It's well done, and if this reviewer's interpretation is correct, it's an example of the cast refining their characters through the three-play journey.

Practice has made the accents perfect. Serviceable in the first production, the English accents are now stunningly accurate and unforced. It's the difference between conscious attention and natural ease.

David L. Arsenault's impressive set design takes advantage of Dorset's big proscenium to angle the room, defining strong diagonals in a formal space made orderly by paneled walls and a long antique dining table. The wall separating the room from the garden features a grand French door flanked by window seats — which Yionoulis exploits when characters need somewhere to sulk.

Stuart Duke's lighting is every bit as essential as the set design in conveying the architectural shape of the room. And Duke's superb expression of the time of day clarifies the arc of the weekend all on its own.

The well-thought-out costumes, by Charles Schoonmaker, are designed to elicit some winces over 1970s style while smartly defining the characters. Norman's ability to wear those particular pajamas with pride offers as much insight into the man as his lines do. Reg's wide ties and Sarah's hostess-with-the-mostest dresses are a time capsule that is fun to open.

Even the curtain call continues to tell the story, and as Friday's opening night audience enthusiastically applauded, the characters didn't stop their flirtatious shenanigans. If you don't want it to end, it doesn't have to — the third part of the trilogy opens at Weston Playhouse on July 21.