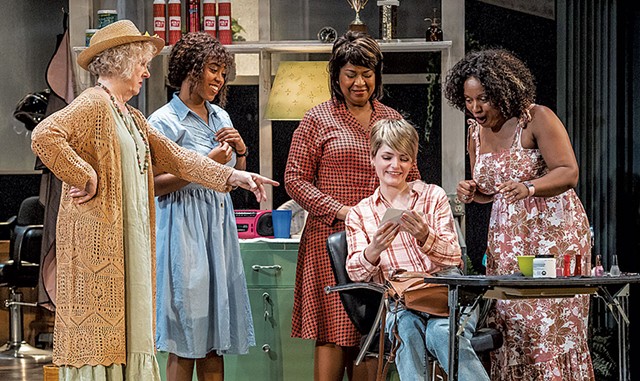 In the 35 years since the heartwarming Steel Magnolias premiered, more has changed than the hairstyles we see in a little beauty shop in the play's fictional Louisiana town. Today, an upbeat story is a commodity, designed to press the tear-jerk lever in a consumer, but Robert Harling's 1987 play is a well-crafted comedy that simply shows the essence of compassion. It's a straightforward expression of kindness itself, without gimmicks. In Weston Theater Company's charming revival, we see good people effortlessly doing good things.

Real friendship unites the play's six women, giving them strength when they share sorrow and a bubbling fountain of humor when they show their affection by mocking each other. They have plenty of jibes to make about the surprisingly useless men in their lives, too. These are funny women, eager to talk and make each other laugh.

Weston's production features three Black actors and three white ones, and this casting enriches the play's positive tone. Thanks to Harling's upbeat script, it doesn't feel like a fantasy to enter a beauty parlor and find a sympathetic portrayal of the South, featuring firm friendships between Black and white people, all at different income levels. The drama doesn't come from conflict but from loss, so the connections endure.

Truvy's beauty salon is fitted into the carport of her home, and Saturdays are reserved for neighborhood friends to get their hair done and gossip in this haven of hair spray. After a hairdresser leaves, Truvy hires novice Annelle, just out of beauty school. Even when Annelle is secretive about the deadbeat husband who's just left her, Truvy is sure she can trust her. "I've always wanted to hire someone with a past," she says.

And that's the way the whole neighborhood treats danger — the people you know are people you can trust, and the people you don't know yet are people you can get to know. Four other characters will visit Truvy's shop: the levelheaded social worker M'Lynn and her feisty, romantic daughter, Shelby; local notable Clairee, affluent widow of the former mayor; and the acerbic Ouiser, who nurtures an ownership dispute with M'Lynn's husband over a particular magnolia tree.

The story begins on Shelby's wedding day and spans three years, which include the diabetic Shelby's difficult pregnancy and M'Lynn's search for the best way to protect and help her daughter. Annelle settles in at the shop and embraces Christianity with a fervor the others forgive with a shrug, while Clairee blossoms as a business owner and Ouiser keeps up her curmudgeonly commentary. Truvy cuts, curls and colors, making everyone welcome.

But sadness will visit them, and the play is about the strength that each musters to meet it. The six friends have found that the secret of taking care of each other is knowing when to tease, when to comfort and when to cry.

The 1989 film adaptation of the play, with a screenplay by Harling, was a commercial success with a star-studded cast. And a mighty big cast, too, because the movie includes the men who are only mentioned in the play, abandoning not only the play's all-female format but its conceit of setting the whole story in the beauty parlor. In the movie, viewers see events take place; in the play, characters tell each other what's happened to them.

Both are good methods of storytelling, but as the play proves, telling can be more powerful than showing when the emphasis is on the impact of an action. What the characters feel and how they face it are the heart of the play.

It's never dull in Truvy's salon. Director Sarah Elizabeth Wansley keeps all of the actors engaged with each other as the zingers fly. She has built an ensemble that works beautifully together, radiating real warmth. Harling's sweet characters aren't especially deep, but they grow compelling when they worry about each other. By focusing on their connection, Wansley makes sure the light moments aren't lightweight and the dark moments never veer into melodrama.

As Truvy, Almeria Campbell lets the character's loving nature come so naturally that viewers may not notice that Truvy is close to mythic. Campbell's ease with humor gives the portrayal a casual realism.

As Annelle, Nyla Sostre is captivating even when she's trying to hide herself from scrutiny, and her growth from fearful, abandoned young wife to caring adult is subtle and strong.

Thursday M. Farrar gives Clairee the ebullience of a jokester who's also a great listener. Weston regular Dottie Stanley gets to luxuriate in Ouiser's caustic comebacks.

Lexi Lapp, as Shelby, embodies the sugar and steel of a young Southern woman. Lapp makes us love the fact that she's going to get her own way, whether it's by smiling sweetly enough to melt the obstacles in her path or by pulling on a tough hide to walk through fire.

Playing M'Lynn, Amy Van Nostrand shines at the center of the play's emotional climax. In a fine scene that swings from grief to anger, Van Nostrand sheds tears, but the real power of that moment is the way her feelings make the other characters cry. The ripple of emotion through the group doesn't stop before it reaches the audience, too.

Scenic designer Regina García sketches the salon with ceiling beams and posts for walls, a literal image of openness. The props and hairdressing supplies for both Black and white hair are so accurate that you can smell the hair spray as you enter the theater.

Over the two-hour run time, Campbell and Sostre convincingly style the other four actors' hair. Wig designer Anne Nesmith lays the groundwork, and Jazzy Armstrong and Sostre herself consulted on hairdressing technique.

Tears fall in this play and then get wiped away as another laugh follows. In a maudlin story, a character begs for sympathy. Here, the audience is free to give it and to leave fortified by the kindness they've witnessed.