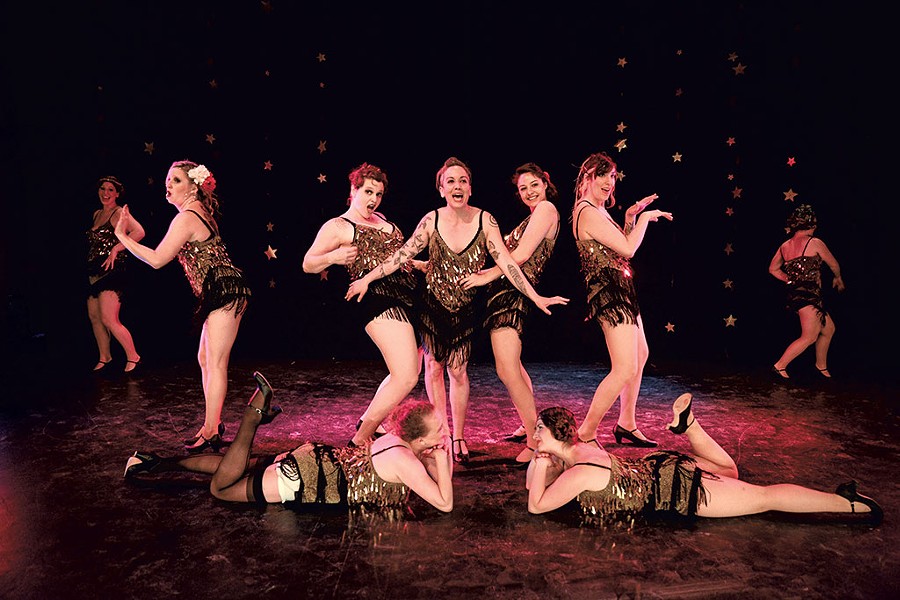 The 17th annual Spielpalast Cabaret returns to the Main Street Landing Black Box Theatre this year for two weekends of music, dance and sketches featuring bawdy humor, zippy one-liners and spot-on satire. Though the entire show is newly written and choreographed each year, what remains the same is its inspiration: Weimer-era German cabaret. If current news headlines have you in a state of despair, this sardonic variety show might provide catharsis.

In a way, Spielpalast transforms the entire city of Burlington, rechristening it "Berlinton." Even before the show begins, saucily dressed cast members work the lobby, enticing theatergoers to purchase a flask or other merch or to imbibe something from the bar catered by the Skinny Pancake. The overall effect is to transform the otherwise staid venue into a place where naughtiness is welcome.

Each year's cabaret consists of a series of vignettes, which the cast creates in a collaborative process. Though the show is currently emceed by the highly capable Vanessa Ament and choreographed primarily by Spielpalast cofounder and director Lois Trombley, individual cast members take the lead in many numbers, their talent and tenacity breathing life into every moment.

The German accents and allusions that fill the show — mixed with influences from France, England and the American South — are a nod to the Weimar Republic, or the German state from 1919 to 1933. That fraught time, as Spielpalast notes in its program, saw "mass propaganda, censorship and civil unrest," trends that ultimately led to the rise of Adolph Hitler, the atrocities of the Holocaust, and the Second World War.

Amid the unfolding horrors of Weimar, cabaret emerged as an art form that encouraged creative expression, risqué jokes, hot music and prolific drinking. Audiences could briefly forget about the uncertain fate of their government and country while indulging in uncensored pleasures.

On opening night, Spielpalast (the German word translates as "palace of play or games") turned the Black Box Theatre into a bustling speakeasy. In the lobby before the show began, the gypsy-jazz music of Trio Gusto (so called despite having two members) helped set the period mood. Then the larger-than-life characters and nimble musical ensemble worked together to create an immersive experience, from the moment the doors opened until final bows.

Phinneus Sonin, former longtime MC of Spielpalast, returned to the show this year in the persona of Stephen Wolff, aka Steve, a Siberian wolf-man raised by huskies. In a 2015 interview, Sonin told Seven Days that "For 14 years I've come up with ways to find parallels with the Weimar Republic. It was easier when George [W.] Bush was president." Little did he know what was to come.

Annie Parmalee, who led Spielpalast's creative direction along with Ament this year, stepped in to satirize the current commander-in-chief. Parmalee stole the show with her hilarious character Curdle May, born in a bunker in the plains of "North Southeast West West Dakota." She gleefully pulled faces that would make Lucille Ball proud, and her song about "Mr. Rump," his wife, "Malaria," and Vladimir Putin (riding a hobby horse) was the comedy sketch Berlinton has been waiting for.

Following Sonin, any Spielpalast MC has big shoes to fill. Ament did just that in black vintage pumps and men's attire. She demonstrated a remarkable singing and speaking voice, spot-on comedic timing and the innate ability to ad lib, making even rehearsed banter feel spontaneous. As Robyn Darcy, she was the indisputable darling of the cabaret. Ament's gender-bending character, whose fictional backstory includes making a living as a boxer at the "Repton Boys Club," often played the straight "man" to a collection of zany personalities.

However, Ament's androgyny gave way to pure femininity in her eye-popping striptease that closed act one. It's likely that every audience member, regardless of gender or sexual preference, was turned on by her performance. With alluring confidence, Ament infused sexiness into the very stretch of her suspenders. She ended her number with a knowing "You're welcome" and a coy smile.

Trombley showed her vocal as well as dancing prowess in the show-stopping piece "Try and Get It," a daring provocation to would-be lovers featuring gorgeous ladies in gold sequins. The choreographer performed in most of the cabaret's ensemble dances, including a titillating group burlesque number that involved strategically placed feather fans.

The song-and-dance numbers would have fallen flat without the rousing Spielpalast Band, led by musical director Nate Venet; his arrangements and rearrangements provided the show's backbone. The other band members were John Thompson-Figueroa, whose tuba practically became a speaking character; Colin Henkel, whose percussion kept toes tapping; trombonist Sarah Mazur, who also had a small speaking role; and Ari Erbalm, whose saxophone and "miscellaneous doodads" added sonic texture to this rich production.

This Spielpalast production was not without its hiccups. It took a few acts for the show to hit its high-energy stride. There were some fumbles in dialogue, noticeably in a Peter Pan-inspired scene, and some acoustic challenges.

While most vocalists (sans microphones) had the strength to be heard over the live band, belting too much can damage the voice. Ament, who carries much of the show's dialogue, had a brief coughing fit when introducing the band. But, in this vaudeville world that thrives on chaos, the adept performers recovered swiftly.

The theme of this year's cabaret was dreams, and the show delved deeply into the troupe's subconscious before Ament awoke in a late scene and exclaimed, "It's not a nightmare, it's my life!"

In a political climate that's too close to the Weimar for comfort, it may be wishful thinking to hope for an imminent end to the collective nightmare. But Spielpalast Cabaret, true to its name, helped us forget our troubles for the evening; any mention of dark times was quickly deflated by a snide quip or a well-timed innuendo. The world still needs cabaret, and Spielpalast valiantly obliges.