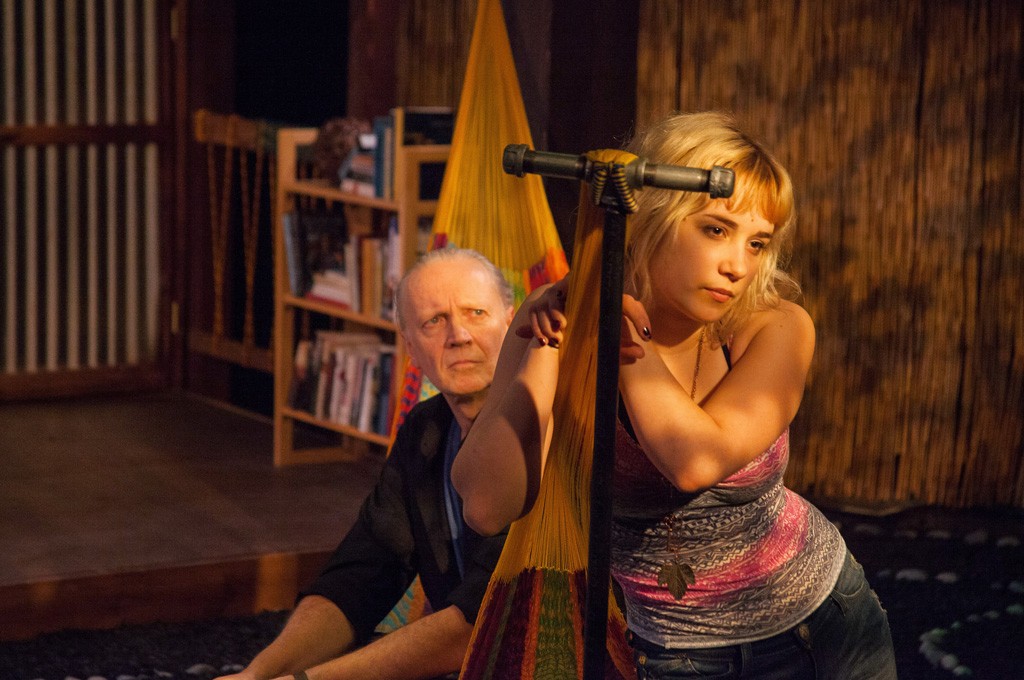 It takes courage and craft to bring a character to life onstage and draw the audience inside her hopes and fears. To see a high school senior do this is especially riveting, and that is what awaits you at Vermont Stage Company's production of Slowgirl, written by Shelburne native Greg Pierce. The intriguing 90-minute play, which premiered at New York City's Lincoln Center in 2012, is receiving its Vermont debut under the direction of Robin Fawcett — Pierce's drama teacher in high school.

Gianna Kiehl, a senior at the Lake Champlain Waldorf School in Shelburne, is a ray of light in a lively, demanding role. Paul Schnabel, a Burlington-based theater veteran who cofounded the Off Center for the Dramatic Arts, offers a subtle performance to complement her.

The two-character one-act covers 17-year-old Becky's visit to her Uncle Sterling's modest house in Costa Rica. They adjust to each other over six days — after an eight-year interval since their last meeting — and reveal what brought them to this isolated spot at the edge of a jungle.

After his law partner was found guilty of embezzlement, Sterling left his legal practice, and his wife divorced him. Though Sterling was never implicated in the law firm's scandal, questions about his possible involvement haunt him and his family. He now lives as a reclusive expat, spending his days silently reading while the jungle around him chirps and clatters with life.

Becky is visiting to gain distance from a tragedy that happened at a party she attended: Some kids had invited a developmentally disabled girl, who got drunk on Jell-O shots and fell out of a second-floor window. Marybeth, tagged with the nasty nickname "Slowgirl," is now in a coma.

Pierce's artful script unveils these facts slowly. With a masterful ear for speech, he writes dialogue of lyrical naturalism, and makes it so authentic that exposition has no place. Instead of sneaking in explanations and background, Pierce has his characters converse as if they know what they know; it's up to the audience to piece together their histories. The story's disclosures are so gradual as to have fierce, dramatic effect.

The play's construction creates suspense, yet the real tension is not about story but character. Becky's conversational throttle is fully open, but if she's quick to talk about sex, drinking, her popularity and a pile of other preoccupations, she's also careful to withhold. It's hard to tell if shame, confusion or prevarication makes her bury details about the party. What's clear to the audience is that this sympathetic character is too young to have foreseen the consequences of her actions; she may feel guilt, but her immaturity confers innocence, too.

In Uncle Sterling, she finds the perfect listener. And he finds, at last, someone to stir up his regrets so keenly that he can see a bit of hope lying beyond them. Every day, Sterling silently walks the path of a labyrinth he built on a hilltop. As he tells Becky, monks say a labyrinth can be walked as a journey, or in penance. Pierce's theme is nestled in that choice between discovery and atonement.

Fawcett elicits nuanced performances from Kiehl and Schnabel and keeps the action unforced, without dramatic affectations. She brings an intelligent sense of rhythm to the piece, letting the actors take the time they need to hesitate or lurch forward as they excavate each other's sorrows. The easy, artless staging underscores Pierce's low-key naturalism, and each line sounds more like it's overheard than crafted for effect.

Fawcett lets the play's humor establish nice connections for the characters. Becky is a motormouth, and what she blurts out is sometimes unintentionally funny — and invariably endearing. She also knows how to joke to puncture Sterling's reserve, and the direction lets these small jabs glitter as each actor listens and reacts.

Pierce captures the wild, discursive, boastful and bashful voice of a teenage girl, and Kiehl brings Becky to life. Her physical and vocal freedom show from the moment she enters to awaken Sterling, dozing in his hammock. Kiehl gives Becky the thoughtless swagger of a preoccupied teen, and then adds the tentative, troubled gestures that show how hard she's working to appear sophisticated.

Schnabel anchors his performance in Sterling's quiet avoidance, speaking with halting softness and standing with shoulders drooping. He remains guarded about his inner pain and doesn't let Becky's nonstop chatter disrupt the peace he's made with his past. He listens with unbounded intensity. Schnabel's low vocal volume could be challenging for audience members seated at a distance, but his intimate tone suits the role.

Blair Mielnik's set is beautifully detailed. On a platform upstage stands Sterling's house, its reed walls providing more texture than structure, with hints of a corrugated tin roof above. The mildly scruffy furnishings and the Tibetan prayer flag hanging in the kitchen show Sterling's hippie-practical lifestyle. The labyrinth, executed in white stone and dark gravel, is wonderfully realized.

The lighting by Jeffrey E. Salzberg transforms the compact space. Mielnik cleverly fits the labyrinth, which is supposed to be some distance away, right around the house, and Salzberg's lighting successfully differentiates it. The wide palette of lighting effects runs from dark jungle mystery to hot confrontation, always deepening the mood.

Catherine Vigne's costume design hits the conflicting notes of a contemporary teenager's apparel. Becky's tight, skimpy clothes expose both her sexual ripeness and a body so young it's still striving to look mature. The contrasts are everywhere: Her jangled necklaces are both deeply valued talismans and items on casual display. Sterling's sloppy shirts and casual pants suggest a man who's given up on appearances.

In an affecting performance, Kiehl shows Becky teetering between innocence and experience. She didn't anticipate the consequences, or understand the cruelty, of letting a girl with disabilities make bad choices; she knows even less how to accept or reject this truth about herself. How do you atone for a mistake made before you know what it means to make a mistake so big?

Sterling offers only understanding. Becky has to learn that understanding, and a little love, are all the comfort the world holds.