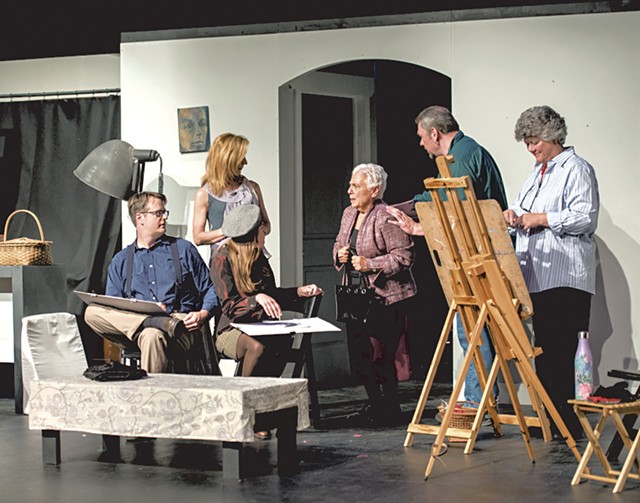 A play about self-discovery is uplifting, and never more so than when the audience encourages the performers. With little murmurs of appreciation and warm laughter, the full house at last Thursday's opening of Sitting Pretty demonstrated that community theater is often a collaboration of actors and audience.

The supportive mood began before the lights dimmed. Girls Nite Out Productions cofounder Jennifer Warwick and board member Betsy Conlon thanked sponsors and let the audience know that it was cofounder Janet Stambolian's 70th birthday. Stambolian was backstage, waiting to make her entrance as a character a decade younger. She couldn't see the audience, but she could hear them sing her a rousing "Happy Birthday," kicking off the show with a festive feeling.

In its eighth year, Girls Nite Out continues to produce plays written by women featuring strong female roles. Amy Rosenthal's Sitting Pretty is a sweet story that shows it's never too late to find happiness.

Late middle age has crept up on Nina and Nancy, unmarried sisters who share a New York apartment. Nina is still using her art history education in a job as a museum guide; the work has lost its luster, but at least it gets her out of the house. Nancy, on the other hand, now does little more than mope on the couch. At 60, she's been laid off from her clerical job and feels she has no purpose in life.

Both women are unfulfilled, but neither is prepared to change. They live a settled life, punctuated with visits from their friend Max (Clem Turmel) who stops by for tea and makes awkward attempts to woo Nina. He has a puppy's eagerness to please and is about as romantic. Sincere to a fault, Max provides handyman services out of true affection for both sisters, even as Nina continues to dismiss his clumsy overtures.

Philip is a middle-aged painter with artist's block and a long history of dalliances — some of them overlapping — with his models and students. As the play begins, he's breaking up with 20-year-old Zelda, whose bitterness about his wandering eye makes her suggest he try working with an older model. Maybe that's the only way he can keep his hands off any woman he takes the time to observe.

As the play's title predicts, Nancy replies to Philip's "model wanted, older woman preferred" notice. Nina has urged her to find something to do, and Nancy will end up telling her she's joined an art class. She's not ready to share with her sister the shock she had on discovering that modeling in a life drawing class means posing nude.

The class of five amateur artists is supposed to be a collection of oddballs, though Rosenthal dishes out only superficial traits for them. Everyone has given up on communicating with silent Luka (Brian Boardman). And most of them are tired of hearing from Sylvia (Kimberly Rockwood), who manufactures opportunities to boast about the son she idealizes.

Bridget (Pam Dewey) and Martin (Bob Martin) are married, but the class doesn't seem to bring them any closer. Josie (Rachel Natvig) hasn't recovered from her breakup with Philip and is prone to overwrought rants.

At her first modeling session, Nancy tries to dodge disrobing, and Philip's blasé encouragement doesn't begin to calm her. To stand naked in front of strangers is a huge leap for this shy woman, but confronting her fear turns out to be just what she needs to find happiness again. The highlight of the play is Nancy's radiant smile once she's comfortable holding a pose. It's a moment of real theatrical joy.

Rosenthal's script relies on somewhat stilted speeches to launch Nancy, Nina and Philip toward their moments of revelation. But this production's tone is one of cheer, and the show's sentimental conclusion is the point, not any deep drama on the way there. Viewers who want to watch sympathetic characters bust out of their ruts will enjoy it, though Sitting Pretty doesn't explore the psychological rationale for change, just the relief of a new lease on life.

As Nancy, Stambolian must start out in a pit of gloom, a mood she invokes by sitting still and averting her eyes from Nina and Max. When Nancy regains her optimism, Stambolian is sunshine personified and just about clicks her heels when she engages with Philip and his students.

Linda McGinnis, as Nina, is energetic and brisk, a woman who's exchanged the romantic disappointment of her youth for adult irritability.

Leigh Guptill plays Philip with doleful complacence — he doesn't relish disappointing women but can't quite avoid it. His kindness toward Nancy helps him discover painting again. As Zelda, Grace Luise Baker is suitably harsh to Philip, though both characters treat the breakup as more inevitable than wrenching.

The story takes place in Nancy and Nina's apartment, Philip's art studio, and the café at Nina's art museum. Set designer Ann Vivian has filled each location with detailed set dressing, including reproductions of paintings. In particular, Peter Paul Rubens' "Venus in Front of the Mirror" nicely echoes Nancy's self-discovery. Set changes take some time, but the use of moving walls and screens is clever.

The props, costumes, set construction, and sound and light design are the polished work of a crew of eight. The production takes full advantage of the wide playing space and the professional facilities of the recently renovated Black Box Theatre.

Sitting Pretty isn't an arduous journey of self-discovery but rather a happy celebration of characters changing course. Stambolian takes the same physical dare as her character, but she does it before an audience. Thursday's supportive crowd showed appreciation for her and for what community theater is all about. When people entertain each other, everyone feels the warmth.