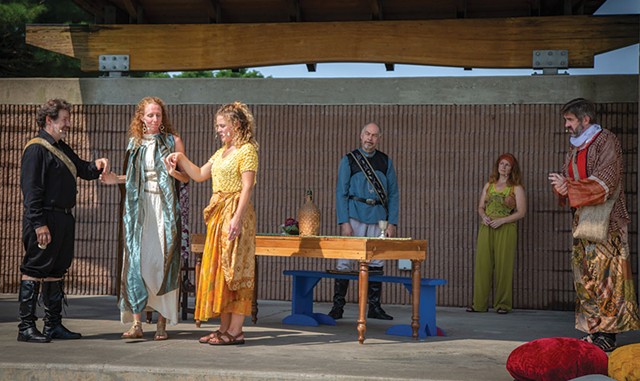 At a rate of one show per month, it would take more than three years to see every William Shakespeare play. But the Vermont Shakespeare Festival has found a clever way to present the entire lot in one night — kind of. Over four one-acts, Shakespeare: Completely Unbound! offers new stories that combine themes and dialogue from all of the Bard's plays.

Each act distills the essence of one of Shakespeare's four genres: romance, tragedy, history and comedy. Familiar stories are carved out of crisscrossing stanzas. Royals scheme, fools jape, women disguise themselves as men, villains pontificate, monarchies crumble, and lovers quarrel and swoon.

But this isn't the Into the Woods of Shakespeare, nor is it an irreverent satire like The Complete Works of William Shakespeare (Abridged). It's an original mashup devised by VSF. And, like the best song mashups, the show finds something new to explore in what was already there.

Nine actors pop up in different roles throughout the segments, as well as switch characters within them. They mix and match famous quotes such as "Friends, Romans, countrymen, lend me your ears" and "To thine own self be true."

Occasionally, this sounds a bit like text generated by an AI trained on The Tempest, Julius Caesar, Richard III, Much Ado About Nothing, etc. But most of the dialogue comes from lesser-known passages. VSF's co-artistic directors, John Nagle and Jena Necrason, and several other writers painstakingly assembled them into an iambic pentameter stew.

In the Renaissance romance "The Match of Caitiff," by Orlando Grant and Eliza Pagel, the Queen of Caitiff (Susan Palmer) seeks to marry off her daughter, Terra (Grace Callahan), to military man Kit (Nagle). But the conniving general Turginess (Paul Ugalde), who moonlights as a sorcerer, has designs on the crown.

After Turginess blackmails the secretly gay Kit ("I've seen you with men," he says menacingly) and murders the queen with a spell, Terra and the fabulous court jester, Clown (Andrew Cassel), escape his clutches.

Five years later, Kit is fully under Turginess' thrall and forced to debase himself in humiliating ways, including dressing up in a furry bear costume. Elsewhere, Terra and her GBF devise a gender-bending plan to foil Turginess, right past wrongs and save the kingdom.

Taking a tragic turn, "Sound and Fury," by Necrason and Nagle, finds contemporary Italy in the grip of a plague that suffocates its victims and compels people to mask up. (Timely, no?) President Antonio (Jordan Gullikson) plays dirty politics while sycophantic public officials Marina (Chris Caswell) and Hector (Ugalde) manage crises.

Antonio's rabble-rousing daughter, Regan (Maddie Barnes), estranged from him since her mother's suicide, urges him to quell the troubled populace. The pompous executive shouts down a news anchor on live TV, essentially dismissing as "fake news" the claims leveled against him. But he changes his tune when he's stricken with the plague, and there's another startling twist to come.

Reeling us back into ancient history, "Citizen," by Margo Anne Whitcomb and Quinn Rol, finds another restless civilization on the brink. A King (Ugalde) and his right-hand man, the Duke of Richmond (Palmer), placate nameless citizens who seek an end to foreign war. One vocal advocate of peace (Sorsha Anderson) serves as liaison between the monarchy and the hoi polloi.

The King plots the advocate's death while Richmond plans to usurp the throne. Exploring the philosophical aspects of murder, the political thriller ends in a violent coup.

The couple forges love letters from Ursula to Tobias and vice versa, which elicit playful banter from the will-they-won't-they pair. But the cousin trap doesn't go quite as planned. While Tobias is lovestruck, plucking out sickly sweet verses on his acoustic ("I am your spaniel!"), Ursula is committed to her studies and can't start a love affair until she matriculates. A frustrated Julia and Ferdinand are temporarily stymied.

A soul-searching romp through the forest ensues. Each couple, plus meddling butler Oliver (Nagle), schemes to make things right and let love prevail. And that it does.

The writers of Shakespeare: Completely Unbound! acquit themselves admirably in the task of choosing digestible passages from 37 texts to create something new. Fans of the Bard will have fun playing "catch the reference" as fragmented favorites flit by in new contexts. Meanwhile, Shakespeare newbies will get a taste of his entire oeuvre in a little more than two hours.

The original print version of this article was headlined "Globe-Trotters"