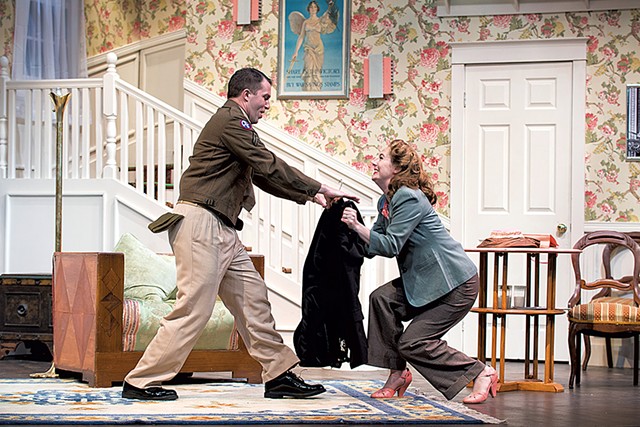 Theatrical farce rule of thumb: If the first scene establishes that the vicar owns three suits with clerical collars, before the play is over three vicars will pop up onstage, most of whom are not ordained. In Philip King's 1943 British comedy See How They Run, now at Saint Michael's Playhouse, a cast of nine must run, jump, pass out, slam doors and claw their way through misunderstandings. Last Thursday night's audience did a lot of laughing.

In the updated version of the play performed at St. Mike's, it's just after the end of World War II. Penelope, an American former actress, is happily married to the Reverend Lionel Toop, the vicar in a small English village. She's stylish and free-spirited; he's stuffy but good-hearted.

Miss Skillon, the self-righteous village busybody, peppers the vicar with complaints, hoping he'll join her in being shocked at Penelope's penchant for wearing trousers about town. Lionel proves adept at selective hearing and genial nodding.

On an ordinary Saturday evening, Ida, the maid, has the night off and the vicar will be playing piano for the glee club. Even tight-jawed Miss Skillon, having lodged her latest complaints, may eventually depart. Penelope should have a quiet night to herself.

Tomorrow her uncle, the bishop, is to arrive. And the visiting Reverend Humphrey will give the Sunday sermon; he also may drop by the house. The key to all these comings and goings is that none of the visitors has met the vicar before, and one clerical collar looks much like another.

Enter Clive. He's an American GI in uniform with a night of leave who looks up Penelope, his stage partner during their youthful stint as actors. They fondly, and platonically, recall their acting days and decide to go out to a play. But Clive can't be on the town in uniform, so Penelope suggests the perfect disguise: the vicar's second-best suit.

And off we go. The audience has a lot of doors to watch as the characters dart in and out, pursuing either each other or a good hiding place. King stacks up the coincidences and misunderstandings to a bonfire-size pile, starting with Ida flirting with Clive and Miss Skillon mistaking Clive for Lionel. Mix in the unexpected arrivals of the bishop, Humphrey, and an escaped Russian spy, and you have the meaning of madcap.

The characters exert themselves so much that consciousness is truly at a premium here. Characters are drunk, dizzy from running or out cold from a knock on the head. No concussion protocols are needed in a staging that uses sound effects to signal a KO. The comic-book boing suits a farce that invites the audience to try keeping track of who's hiding where and how a certain scene must appear to a certain character stumbling upon it.

The play was written during wartime in England, designed to satisfy a need for frivolous entertainment that would buoy Britons in the midst of shelling and tragedy. Indeed, on opening night in London's West End, three bombs exploded nearby. The show carried on for an audience accustomed to treating theater as a defiant, if silly, dose of normalcy during the war. The leading man later complained that all three explosions occurred during his funniest lines.

The play has lightweight entertainment objectives, but it takes craft to realize them. Director Catherine Doherty makes fine use of a stage wide enough for galloping, the actors' agility and an array of compromising circumstances in which the characters are pinned down and squirming. Doherty gives all the players their little heroic moments when they seem almost able to master their situations. The free fall, when hope is again lost, is the delight of this staging.

King's story relies on stock characters. It's up to the actors to make them appealing without begrudging them a complete lack of depth. This cast has the charm and energy to amuse an audience that can root for more mayhem yet also hope these dears survive. It's pride that farces shatter, not bones.

Clare Mahoney as Penelope and Gregory Jon Phelps as Clive form a dashing duo in search of innocent fun. Their insouciant expectation of surviving a night in which each mix-up breeds another makes them endearing. Just before Clive dons the vicar's suit, he voices his only doubt: "I've been in a lot of plays where something like this doesn't turn out well."

Lilly Tobin gives Ida an immense cockney accent and a laugh-inducing ditzy take on all the action. As Miss Skillon, Amanda Ryan Paige wraps herself in righteous indignation, only to spend much of the play being propped up, dragged and hidden in the closet — the classic fate of the pompous scandalmonger.

Tyler Nye as Lionel, Kenneth Kimmins as the bishop, and Bill Carmichael as Humphrey are all at their best when flustered and are rarely anything but. "I was perfectly sane when I entered this house," Humphrey says, almost poignantly.

Kordell Pritchard uses multiple foreign accents as the dodgy Russian spy, and Zachary Gibson has his hands full trying to sort out the mess as the police sergeant.

A grand set and lighting design by John Paul Devlin provides the ideal staid backdrop to the shenanigans. The living room of patterned wallpaper and knickknacks is richly detailed, and the doors get a wonderful workout.

The audience is asked to turn off cellphones before the lights go down, and disconnecting from today's headlines is just what a show of silly gags and goofy chases is for. If the news offers little to laugh about, the sight of a vicar scrambling about in underwear and garters always does.

The original print version of this article was headlined "Comic Timing"