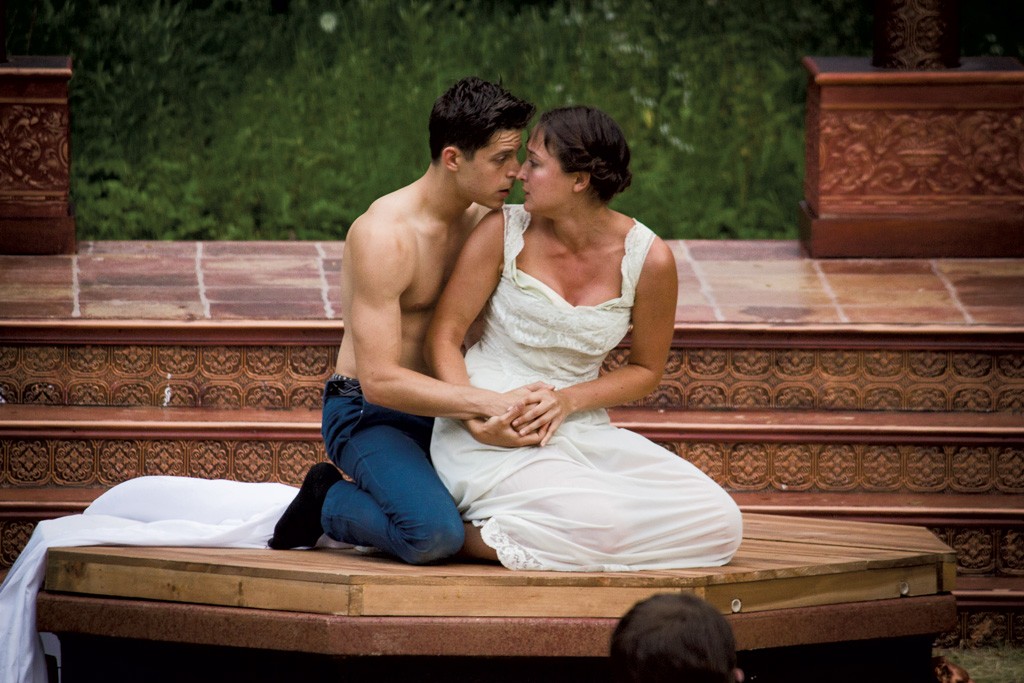 In Romeo and Juliet, a violent feud between two families is the backdrop for a love story. Shakespeare's play is about an idealized love, but it's also about youth itself. For these characters, the most powerful way to express an intense feeling is to be willing to go as far as death — to risk one's life in a sword fight, or to die for love.

Vermont Shakespeare Company is presenting a vigorous, impressive production this summer, both outdoors at North Hero's Knight Point State Park and on the Shelburne Museum grounds and indoors at the Royall Tyler Theatre at the University of Vermont. Nick Piacente and Lauren Pisano have striking chemistry as Romeo and Juliet. John Nagle directs with a keen eye for comic effects and big physicality.

The Capulets and Montagues are feuding. And "what's in a name" is of great importance to the patriarchs nursing grudges and the offspring who offer life and limb to settle them. The play opens in a street brawl. The Prince of Verona puts a stop to it and threatens the next transgressor with death, but the resentments still simmer.

Romeo, a Montague, first sees Juliet at a ball given by her father, Lord Capulet. Nagle stages this scene wonderfully. After Romeo and Juliet have exchanged a glance, they whirl along with others in a dance. The moment they intersect as dancers and touch hands, everyone else freezes as they share their first words. Nagle shows us the warring forces that will be their undoing — frozen, oblivious — and rivets our attention on the two lovers as they feel an exhilaration that seems to stop the Earth from spinning.

Romeo persuades Friar Laurence to marry him to Juliet in secret, and the three of them have a roughshod plan to overcome the objections of the feuding families. But before it can be realized, a fight erupts between Romeo's friend Mercutio and Juliet's cousin Tybalt. It ends in Mercutio's death, Romeo's vengeful murder of Tybalt and Romeo's exile.

Faced with separation, the lovers are desperate. Juliet, at the friar's suggestion, resolves to use death as a disguise. He has a potion that will make her appear temporarily cold and lifeless. It convinces everyone, including Romeo. When he finds her in her tomb, he sees no choice but to follow her and poison himself. She awakes to find him dead beside her, and she joins him with the plunge of a dagger.

This well-known plot brings one tragic misstep after another, but the enduring play is about how desire spurs each choice. Pisano gives Juliet the intoxicating surprise of falling in love. She doesn't gush to fill out Juliet's ardor; she exhales as if she's just learned how to breathe and feels the joy of mastering it. Piacente plays Romeo big, making bold moves such as a dazzling leap over a fountain. When he speaks, each new idea seizes him and won't let go until he tells it. Nagle makes the love story physical, with full embraces, long kisses and the urgency of touch.

The play's strength is the energetic novelty of Romeo and Juliet's expressions of love, and passionate performances alone aren't enough to make those ideas new again. Nagle uses humor to loosen the grip that familiarity has on the play. The entire first half is played as comedy, and though the romance glistens in this setting, doom doesn't overhang it, only hope.

Nagle occasionally goes too far for a laugh, like having Romeo dive to the ground and writhe in a parody of passion to start the balcony scene. While a little irreverence for "what light through yonder window breaks?" could freshen it, this moment verges on mockery. But overall, the production sparkles with novel choices, and Nagle's daring is commendable.

Nagle shifts the mood from light to dark, beginning with the sword fight between Mercutio and Tybalt. As Nagle stages it, Tybalt's righteous anger is firmly topped by Mercutio's merciless taunting. Fearless to the point of craziness, Mercutio toys with Tybalt, at one point looming close enough to plant a kiss on his lips. An adolescent exuberance infects them both, as if death isn't possible. But it is.

Staging the play outdoors adds an elemental quality, with the wind and the sky elevating the tale to larger-than-life dimensions. Saturday's performance in North Hero included a threat of rain, with skies that darkened just as the play did. Thunder rumbled and lightning flashed, enhancing the power of the story.

In addition to the leads, the large cast has several standouts. Kody Grassett, as Tybalt, is a fierce foil to Dean Linnard's Mercutio. Linnard can fight, leap and bestow a bawdy gesture with glorious ease. His Queen Mab speech is hilarious, as he seems to fetch each new, improbable image out of the air to try it on Romeo.

Jena Necrason finds lovely comic moments for the Nurse, from upstaging Juliet with exasperation when the girl pleads urgently for news of her lover to tussling with a bawdy Mercutio in the street. Bob Nuner, as Friar Laurence, has a twinkle in his eye as he helps the lovers and quiet horror on his face when he discovers the tragic result of his good intentions at the tomb.

Adam Cunningham and Molly Walsh play Lord and Lady Capulet as a couple with different ideas about child rearing. Their dissension, and the husband's iron rule, help underline Juliet's realization that there is no way out. When Cunningham and Walsh discover Juliet's death, they both give way to grief, conveying eloquent understanding of their characters' roles in her loss.

Jeff Modereger designed a set that can work outdoors as well as in the Royall Tyler. His bronze posts and high, stepped platform have a quiet grandeur, suitable for the lovers' dashes into each other's arms and for the tableau of the tomb.

In this production, death is tragic but also triumphant. Pisano and Piacente make a memorable, energetic Juliet and Romeo. For a moment, they seem to have invented love.

The original print version of this article was headlined "Lovers' Leap"