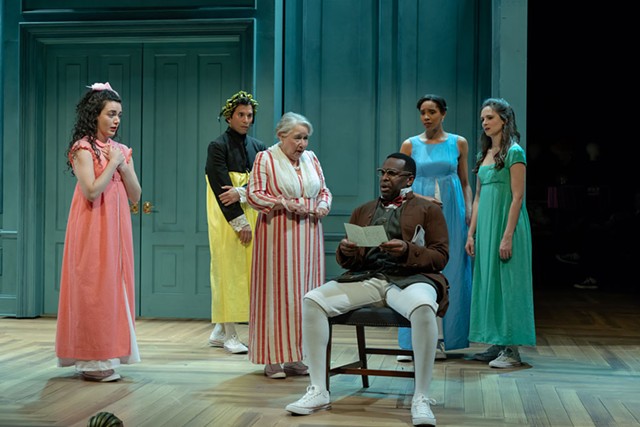 Pursuing a wealthy husband is a high-stakes game in Georgian England, and if it's to be the basis for a screwball comedy, the audience needs to be in on the joke. Pride & Prejudice, Kate Hamill's comic adaptation of Jane Austen's 1813 novel, is less about Elizabeth Bennet and Mr. Darcy than exaggerated theatricality. In Dorset Theatre Festival's production, with switches quicker than the viewer can count, eight actors take on 14 roles wearing Regency costumes finished off with low-top sneakers.

Hamill has made a career of cramming the major plot points of classic novels into brisk modern plays. Her bold dramatizations keep the drawing-room settings while ratcheting up the humor to reveal the novels' withering social commentary to contemporary audiences.

Much of the humor in Pride & Prejudice rests on wringing a society's worth of roles out of eight actors. In Dorset's staging, the casting ignores race, and the role assignments ignore gender. And everyone moves fast. Hamill's trademark collision of old with new occurs in all dimensions, from costume to speech to mannerisms. Ballroom dancing to a Franz Schubert symphony veers into reggae-tinged hip-hop with corresponding choreography. A plastic rain poncho covers a gown. Throughout it all, the age-old question of how a woman will know she's in love remains unresolved.

The curtain rises to reveal the actors in undergarments at dressing tables set along the back wall of the theater. No set is evident yet, but the show has already begun laying waste to artifice by implying that nothing is concealed from the audience.

But plenty will be, because all of the quick costume changes are surprises. The set is in three pieces, cleverly designed by Alexander Woodward to wheel into multiple high-ceilinged Regency rooms. All the configurations, though, leave gaps at the sides and top to reveal the backstage and the lighting grid. Calling attention to the theater's workings is a technique that can give an audience the exhilarating sense that they're dissecting an illusion, but with this ironic script it's a needless gesture.

Fitting in the major events of a sprawling novel inherently emphasizes plot over character. The youngest of the four Bennet family daughters is 14, and even she is limbering up for marriage; the other three virtually have countdown clocks hanging around their necks. Mrs. Bennet sizes up the incomes of potential suitors while Mr. Bennet tries to hide behind his newspaper. His estate can't be passed down to daughters, so their only hope is in husbands.

Jane, the eldest, falls in love with the ultra-eligible Mr. Bingley, but a marriage proposal can't be assumed. Mary, the plain daughter, looks like no gentleman's first choice. This production hammers that point home by having her elicit Nosferatu-caliber shrieks whenever she's noticed. The youngest, Lydia, tries to get things over with so preemptively that she makes a grave mistake.

Lizzy is the clever one, but in this play that simply means she gets the most lines. She claims she doesn't want to marry and proves it by finding the prideful Mr. Darcy insufferable, then fending off her repugnant cousin, Mr. Collins.

The show is quite entertaining, but the acting whole is not greater than the sum of the acting parts. Each cast member does fine work, but each seems to have arrived with an individual comic style.

Viewers can enjoy smooth, urbane humor, suitable for Noel Coward, from Krystel Lucas, who plays Jane with a hint of glamour. For schtick, look to Joan Coombs, who gives Mrs. Bennet broad takes and laughable dog-with-a-bone concentration on getting her daughters married. She blows a coach's whistle to rally them.

Omar Robinson plays Mr. Bennet with dry humor that summons up Jack Benny. With devastating deadpan, Carman Lacivita plays the unlovely Mary as if she's a member of the Addams Family. Lacivita also has the show's silliest physical stunts as Mr. Bingley, who is portrayed as a puppy. Even at rest, this Mr. Bingley bounces on the balls of his feet, alert for a game of fetch.

Ryan Quinn is a master of droll tics, using verbal sputtering with slinky-creepy movement to make Mr. Collins the suitor least likely to succeed. Aishling Pembroke is a funny background presence as the young Lydia, and then she unleashes a powerful study in comic movement and expression as Darcy's aunt, Lady Catherine. Pembroke's trick is nailing the big gesture but pulling back just short of excess.

As Mr. Darcy, Dave Quay is the staunch straight man, eminently mockable for his heroic jaw thrust alone. Quay excels in the show's only sincere moments, and his mincing steps toward romance are cool counterweight to the play's cynicism. Jessica Frey, as Lizzy, is nicely flustered in the great tradition of rom-com leading ladies.

It would be director Christopher V. Edwards' job to blend all these comic abilities into one winning style, but he's chosen to make it a variety show. It's enjoyable that way, even if scenes run a bit choppy and the number of theatrical conceits mounts a little too high, but the audience must run to keep up.

The entertainment is invigorating, with constant motion and abrupt shifts from witty rejoinders to physical comedy. The missing piece, for this reviewer, was a sense that the performance was building toward a comic peak. The strategy of stuffing in something for everyone makes it a snack of appetizers, not a meal.

This play shouldn't be held to the wrong standards. It's not Jane Austen come to life, or social commentary, or a comedy of manners, or even a playground of theatrical deconstruction. At its core, it's a play that aims so hard to please that it keeps tossing love notes to the audience, as if we're the ones being wooed.